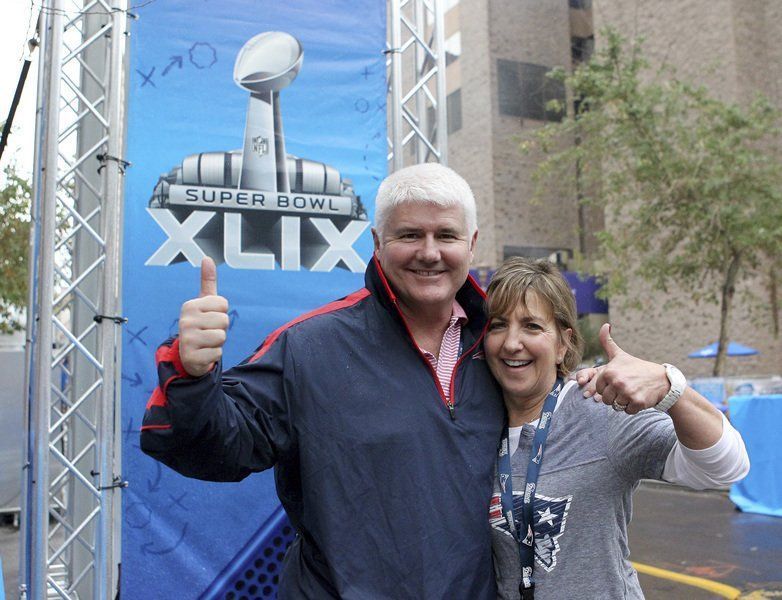 PHOENIX – For New England Patriots fans, battered by blizzards at home and savaged from coast to coast with cries of “Cheater!”, Phoenix is an oasis.

What better place to find refuge than here at the home of Super Bowl XLIX?

For nobody in this town is looking to rip the Pats or their fans. Nobody, outside of the media at least.

In fact, the mood of Arizonans at Super Bowl XLIX is simpatico.

“The people of Arizona have been just terrific,” said Haverhill’s Gail Panaro, out here with husband Gary as guests of the Pats through a family friend who works with the team. “They love us here. They’re rooting for us. They’re certainly not going to root for Seattle. Arizona plays in their division and faces the Seahawks twice a year. They’re rivals.”

Pats fans here are significantly outnumbered by Seahawks followers. Seattle’s 12th man could be an advantage come kickoff at the University of Phoenix Stadium at 6:30 p.m. ET.

But outside of the stadium, even the folks in navy and bright green have been friendly.

“They’re the nicest people you will find,” said Dan Bernier of Auburn, N.H., one of many folks in search of tickets out here. Bernier was offered a pair at $3,000 each but is holding out for something close to $1,500, though reports have even nosebleed seats going for $9,000 or more.

Meanwhile, Bernier is not worried about any Deflategate blowback from Seahawks supporters.

“How can they call us cheaters anyways? Their coach is Pete Carroll.”

Bernier brings up a good point, in the opinion of Pats fans.

Seattle, the NFL’s defending Super Bowl champion, would be vilified nationally against any other team besides the Pats.

The Seahawks were certainly scorned when they faced Peyton Manning and Denver a year ago. Now, you add the title to their brash nature, the spectacle that Marshawn Lynch has become and of course, Carroll’s scurrilous past in leading USC to national prominence.

Villains. So now we have your basic Southwestern stalemate. It’s too bad because some fans with Merrimack Valley roots came ready for warfare.

“Look, I’ve lived in Manhattan for a while,” said Ray Romano, who is originally from Salem, New Hampshire. “I’m used to it by now. Anyone says anything, it will be taken care of.

“This whole deflate thing is a travesty. It doesn’t bother me at all. Everyone is always looking to knock off the golden team. We’re the golden team right now.”

Romano is also looking for a ticket to the game. His past history makes you wonder if Pats fans would want him to find one.

“I’ve been to two Super Bowls,” he said. “I went to Indy (three years ago), and that was just awful losing again to the Giants like that. And I went to the 1986 game against the Bears, and we all know what happened in that one (a 46-10 Pats loss).”

Romano met up out here this week with another Salem guy, Frank Colletta, who has recently moved to Jupiter, Florida.

Colletta said he has been taking it on the chin on the Florida coast, just north of Miami.

“Dolphins fans are the worst,” Colletta said. “There are a lot of haters down in Florida. We win (today) and I’m printing up shirts that say, ‘Jealousy is a terrible thing.’”

Other local fans have also dismissed the issues of the past two weeks and are just looking forward to the game.

When an uncle high up in the Budweiser chain asked him if he could break away from studies at Plymouth State University in New Hampshire for a trip to the Super Bowl, van Gennep leaped at the chance.

“No shot I’d ever pass it up,” said van Gennep. “I’m out here celebrating my 24th birthday (on Saturday) and the greatest gift I’ll ever get is watching Tom Brady grab our fourth Lombardi Championship Trophy.”