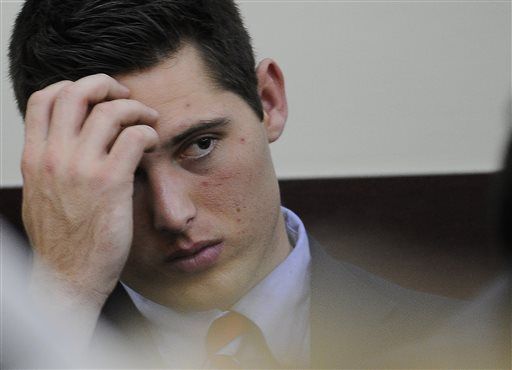 To the two young men, Tuesday’s verdicts show that being drunk out of your mind doesn’t excuse criminal behavior.

Once doted on as potential Southeastern Conference football stars, Cory Batey and Brandon Vandenburg could be sentenced to decades behind bars. Even as first-time offenders, they could spend the prime of their athletic lives in a Tennessee prison.

The two remaining defendants alleged to have joined Batey and Vandenburg in the dorm room attack, former players Jaborian McKenzie and Brandon Banks, probably helped themselves by cooperating with authorities, but their consequences loom much larger now that their former teammates have been found guilty.

University officials, experts on sex crimes and survivors of sexual assault at Vanderbilt and all over the country hope the verdict’s loudest signal goes out to women suffering in silence — telling them that justice is possible without destroying their own lives in the process.

Most college sex assaults don’t turn out this way. A recent Justice Department study found that 80 percent of campus rapes went unreported between 1995 and 2013, compared to 67 percent in the general population.

The victim said she hopes her experience will encourage others to discuss how to end campus rapes.

“I want to remind other victims of sexual violence: You are not alone,” she said in a statement read by one of the prosecutors. “You are not to blame.”

In this case, the evidence was overwhelming. Jurors saw university surveillance video and the players’ own graphic cellphone images that put them at the scene. Vandenburg could be heard laughing and encouraging the attack on video he shared while it was happening.

Testimony showed that he passed out condoms during the June 23, 2013 attack.

Charging all four players with rape even though not all of them engaged in the act itself sends a strong message about holding people accountable, said Jane Stapleton, a University of New Hampshire professor who runs bystander intervention programs at campuses. Only two players were accused of raping the student, but all four were charged with it because prosecutors held them criminally responsible based on their actions that night.

The trial provided a rare opportunity to see what rape really looks like, experts on sexual violence said.

“There’s no shortage of rape and sexual assault cases being put out in the media, but very rarely do we hear all the graphic details of a sexual assault,” said Rachel Freeman, vice president of programs at the Sexual Abuse Center of Nashville.

And unlike so many other rape cases, this wasn’t a matter of “he-said/she-said.” The video made it obvious the woman was unconscious and totally incapable of consenting, so it was impossible to suggest that she was somehow to blame, Freeman said.

The woman testified that the last thing she remembered was Vandenburg giving her drinks at a Nashville nightspot — and that she woke up the next morning in his dorm room, feeling sick and injured. To this day, she has no memory of the attack, she told jurors.

Rumors swirled around campus, but she didn’t learn what had happened until well after police came to her. The players had tried to cover it up by erasing the images. Testimony showed at least five other Vanderbilt athletes saw her in distress and did not report it.

Only when Vanderbilt officials stumbled across closed-circuit TV showing players carrying an unconscious woman through the dormitory and into the room did they begin asking questions and summon the police, who recovered the digital evidence that made all the difference in court.

Seeing the case through wasn’t easy. The woman cried quietly throughout the trial, and doubled over and appeared to vomit at one point when Batey was testifying.

But The Associated Press and other news organizations preserved her privacy, and she endured the proceedings as a Vanderbilt graduate. The attack didn’t keep her from finishing her degree, and she’s now pursuing a Ph.D. in neuroscience at an out-of-state university.

That a victim of gang rape managed to keep her academic career on track is a real achievement, advocates say, something Vanderbilt officials hope students everywhere will consider.

Beth Fortune, Vanderbilt’s vice chancellor of academic affairs, called the victim’s response “forceful and brave,” and said sexual violence will never be tolerated at the school.

“Incidents will be investigated, victims will be supported, and perpetrators will be punished. We will also continue our comprehensive ongoing efforts to raise awareness of the importance of every Vanderbilt student intervening when another student is at risk or in distress.”