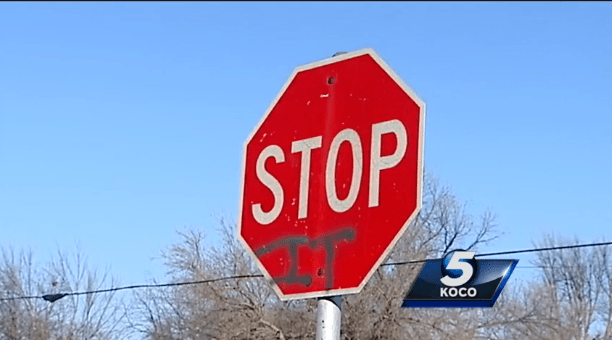 After what she says has been years of picking up an excessive amount of discarded wrappers, bottles and other items of trash from her front yard, the 67-year-old McClain County, Oklahoma woman decided to send the litter bugs in her neighborhood a message. With graffiti.

According to Oklahoma City’s KOCO, Terrell spray painted the word “It” at the bottom of the stop sign in the corner of her yard. As in “Stop It.”

She also affixed a poster board with the words “My yard is not your trash can. Stop it. Please respect me” on the stop sign’s pole.

The cleanliness campaign attracted the attention of local media who apparently failed to appreciate the irony of fighting litter with vandalism.

Terrell told KOCO that the sign is working, that the litter has lessened. However, McClaine County Sheriff’s Captain James Harryman said someone caught spray painting a stop sign could be charged with destruction of property.

So in terms of illegality, is Terrell’s solution to her trash troubles technically worse than what caused them?