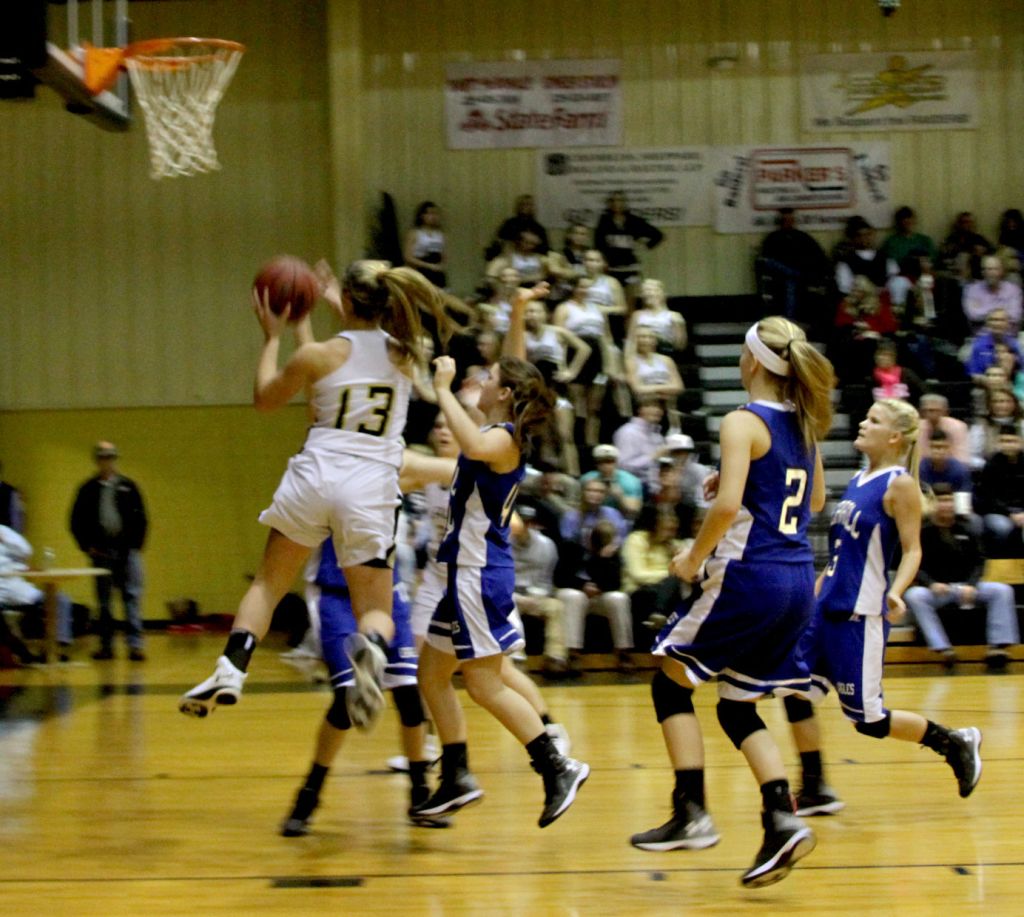 The Southland Academy Lady Raiders started off the weekend strong with a 23-18 victory over the Brookwood Lady Warriors on Jan. 30 in Thomasville. The team lost a bit of steam the next afternoon, facing the Westfield Lady Hornets and falling 4-40 in the Perry match. The Lady Raiders returned to their home court on Feb. 3 to face the Terrell Academy Lady Eagles. Southland’s girls were setback 32-47 by the Lady Eagles in the contest.

In the Jan. 30 region 3AAA match against Brookwood, the Lady Raiders and Lady Warriors both got a stiff start, missing several scoring opportunities. Southland took a slight 6-3 lead in the first quarter. The Lady Raiders made some adjustments to their offensive strategy and returned in the second and third frames to take a 15-9 lead into the final quarter.

Lady Raider head coach Paula McDonald stated “The fourth quarter never really allowed us to settle down, rather, we were able to take advantage of a few mistakes they made. We continuously ran our offense and they had to foul and chase. We were able to outlast them and rest Madison McPherson (13), who was recovering from an ankle injury, for most of the game. They did hit a buzzer shot to cut our lead slightly to 23-18.”

Ella Hawkins (10) had 11 points and six steals to lead the Lady Raiders in their victory.

The Lady Raiders traveled to Perry on Jan. 31 for a non-region match-up with the Westfield Lady Hornets.

Both teams came out with intensity early. Southland’s ladies took a slim 11-10 point lead after the first quarter. The Lady Raiders played very tough defense, but were knocked around down low by the Lady Hornets’ inside girls. Despite Westfield’s hard offensive push, Southland carried a 22-18 lead into the second half.

McDonald said, about the second half, “Our game plan didn’t change, although we began to feel the sting from a very tough inside game. We collapsed on the inside players and allowed them to kick it out to their point guard who knocked down several long shots and helped their surge to take a 33-32 point lead after the third quarter.

Although we played very well, we had a few missed calls and eventually lost two inside players who fouled out. We only managed eight total points during the final period and still held them to just two field goals. We tried to cut the deficit, but had to foul to get the ball back. We wound up losing by a score of 44-40.”

The Lady Raiders took to the boards again in Americus on Feb. 3 to face the Terrell Academy Lady Eagles, suffering a 32-47 defeat in the exciting match.

The Lady Eagles opened the scoring with a quickness, draining a three-pointer 15 seconds in. Two minutes later, the Terrell girls added a lay-up to put them ahead by five. At the five minute mark, SAR freshman Kathleen Kinslow (14) came off the bench to sink a shot from beyond the arc and put three points on the board for the Lady Raiders. McCain followed with a pair of free throws to tie the score at 5-5.

The Lady Eagles went on a 12-0 run for the last three minutes of the quarter, capped off by a paint shot at the buzzer to put them ahead 17-5 going into the next quarter.

Southland came back strong in the second frame, opening up with a lane shot and a three-pointer from Hawkins. Five minutes in, McPherson nabbed a steal that she ran back for a lay-up, followed by a pair of free throws to bring the Southland ladies within three at 14-17. Terrell answered with a lay-up before McCain contributed a pair from the charity stripe and Crew stole the ball and broke fast for a field goal, bringing the Lady Raiders within one at 18-19.

This would turn out to be the closest the Lady Raiders would get to a comeback as Terrell slowly began to pull ahead and held onto the lead for the remainder of the game. In the final minute of the first half, McPherson contributed a block and a rebound to her stats, but the Lady Raiders still trailed 18-26 going into half-time.

Terrell came out fighting in the second half, posting four points before McPherson broke the Lady Raiders’ silence with a Crew-assisted lay-up at 6:00. McPherson added six more points, McCain added a lay-up and Hawkins sunk one from the free throw line to bring the Lady Raiders to 29 at the end of the quarter. Terrell added 10 more points to take a 40-29 lead into the final frame.

The Lady raiders buckled down and tightened up their defense in the final quarter, holding the Lady Eagles to only seven points before the game’s end. McCain and Crew contributed a rebound and a steal to help keep the Lady Eagles out of the bucket during this quarter. Unfortunately, for the Southland girls, this strategy did not afford them many scoring opportunities. Hawkins sunk a free throw that would be the Lady Raiders’ only score for over six minutes. With 2:30 left in the game, Hawkins grabbed a steal and made a fast-break lay-up to cap off the girls’ score. Terrell left the court with a 47-32 victory.

McPherson added 12 points for the Lady Raiders and Hawkins posted nine in the match.

With this string of games, the Lady Raiders’ region record moves to 4-6. The team’s overall record drops to 6-12.

The Lady Raiders take the court again on Feb. 5 to face the Crisp Academy Wildcats in non-region action in Americus.