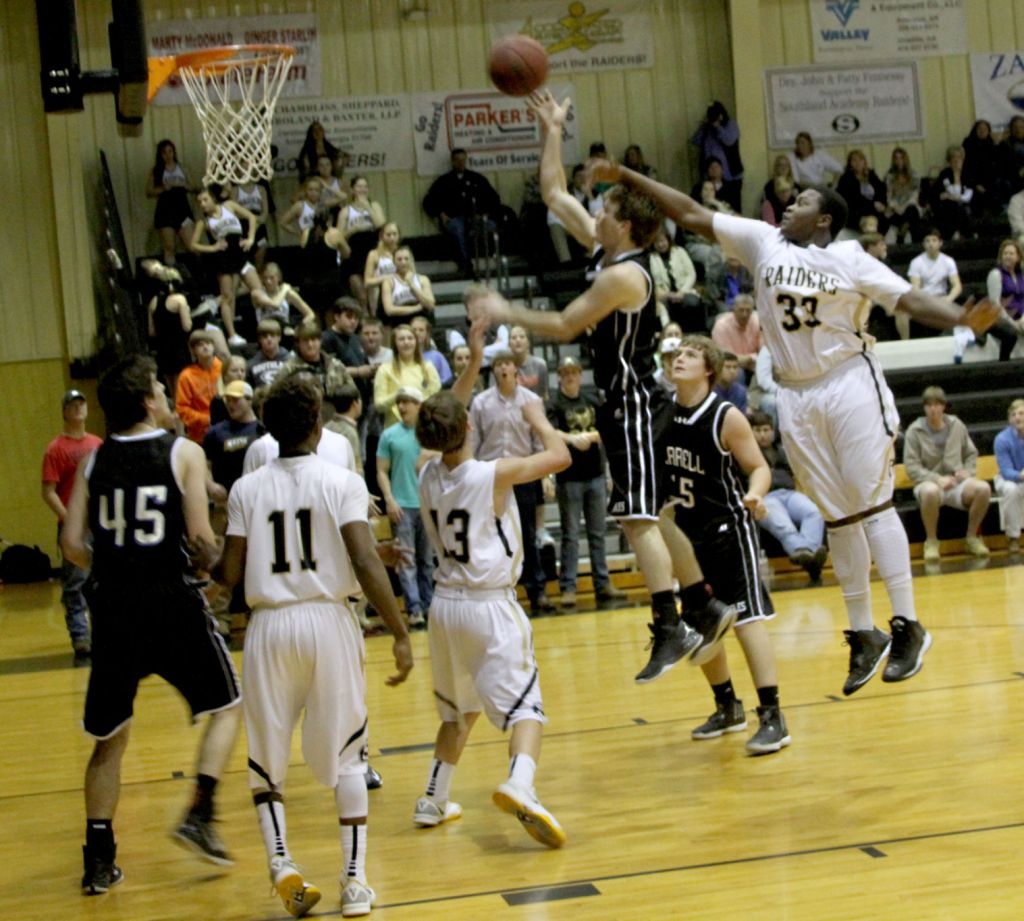 The Southland Academy Raiders took the court on Feb. 3 to face the Terrell Academy Eagles in Americus. Despite a very promising start in the match, the Raiders dropped a 59-64 decision.

The Raiders hit the court with Alex Roach (13), Jamaal Rice (11), Jamarcus Scott (33), Bo Moore (30), and Keyon Stone (12) starting in the match. Stone jumped for the tip-off and Terrell took the first possession.

The Raiders came blazing out onto the court at the game’s begining. Stone opened the scoring with a three-pointer thirty seconds in. He then followed with a Rice-assisted lay-up ten seconds later. Terrell finally made the board at the 6:00 mark. Roach responded promptly, draining one from beyond the arc to bring the Raiders’ total to eight halfway through the first quarter.

Over the next four minutes, Stone sank another lay-up, coupled with a pair from the charity stripe, and Scott landed a Rice-assisted lay-up to give the Raiders a 14-3 lead at the buzzer.

Terrell’s shooters woke up in the second frame and opened the quarter with a lay-up. Rice answered by sinking a rebound before the Eagles drained their first trey of the game. Despite Terrell Academy making a strong offensive push, the Eagles could not make up the ground they needed to close the gap by the end of the half. Stone, Roach, and Scott each contributed points in the second quarter and the Raiders took a 29-19 lead into half-time.

Whatever pep-talk the Eagles’ coach gave during the break seemingly worked as Terrell came roaring back on the court to start the second half. Terrell threw in a lay-up ten seconds in and proceeded to go on a 15-0 run over the next three minutes to take a 34-29 lead.

Rice broke the Raiders’ silence at 4:30, driving the lane for an underhanded lay-up. The Raiders slowly clawed their way back until Landon Henson (20) came off the bench to sink a three-pointer and Stone followed with a lay-up to tie the score 38-38. Stone drained another shot shortly after to give the Raiders a brief lead, but Terrell immediately responded, tying it back up and adding a free throw for a one-point lead

Stone sank one from beyond the arc to take the lead with less than a minute left in the frame. This shot sparked a three-pointer spree in which the teams traded treys for the rest of the quarter, switching the lead four times over the last minute. Terrell led 47-46 heading into the final stanza.

The teams picked up exactly where they left off in the fourth quarter, trading the lead back and forth over the next seven minutes with neither team gaining a significant advantage. By the one-minute mark, the Eagles had pulled ahead 60-57. Scott and Stone executed a pair of blocks to keep them from building a cushion, but the Eagles sank four free throws and held the Raiders to a lay-up. Terrell held a 64-59 lead at the buzzer.

Stone paced the Raiders with 30 points in the match, including four successful shots from beyond the arc. Rice followed with 11 points. Roach contributed eight points, including two three-pointers.

The Raiders take on Crisp Academy on Feb. 5 in Americus.