At the Oklahoma Capitol, potato chips may soon crumble 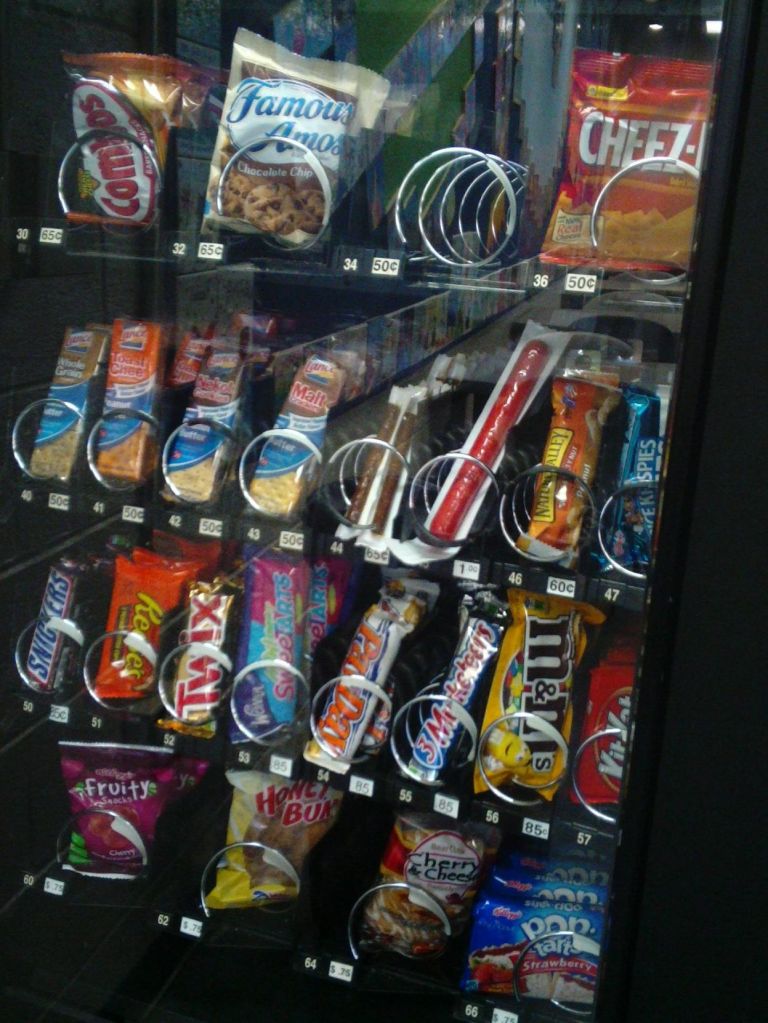 “What are you getting, man?” 18-year-old Eric Wilson II asked his 14-year-old brother, who responded that he hadn’t decided.

The two debated their selections while taking a break from helping their older sister set up for her wedding at the Capitol on Thursday.

It wasn’t long before Eric, a high school senior from Earlham, Iowa, slipped a dollar into the machine near the snack bar in the basement and made his selection — a bag of Baked Lays potato chips.

Then his 14-year-old brother slipped in his money and settled on cookies.

“I’m getting some Skittles because you brought it up,” said Eric, dropping quarters into the machine.

Nick, meanwhile, gobbled down his cookies, with crumbs occasionally dribbling on his shirt, as he discussed vending machine selections.

Should the boys from Iowa visit the Capitol again, they may find their snack choices more limited. The era of refueling on a Snickers bar or Skittles could soon end.

Two Republican lawmakers — Katie Henke of Tulsa and Kyle Loveless of Oklahoma City — are peddling a bill known as the Access to Healthy Choices in Oklahoma Act.

It requires all food and beverages sold through vending machines on property owned or leased by the state to meet a minimum nutrition standard. Think regulation based on calories, portion size, saturated fat, trans fats, sodium, sugar and the presence of fruit and vegetable ingredients.

Neither lawmaker responded to messages seeking comment, but the American Heart Association issued a statement saying it supports the bill and “access to healthier options.”

The proposal is modeled from the federal government’s guidelines for concessions and vending machines on its property.

Coincidentally, it also mirrors a program in place at the Wilson boys’ school back in Iowa.

Nick and Eric said they noticed when the candy disappeared from the vending machines, replaced by Goldfish crackers, baked potato chips, energy bars and shortbread cookies.

Peanuts vanished, too, because of kids with nut allergies.

“It’s kind of a wave of the future where we’re getting a little bit more health conscious,” said Jody Harlan, a spokeswoman for the state Department of Rehabilitation Services, which negotiates food and vending contracts for state and federal agencies in Oklahoma.

Harlan’s agency is involved because of laws that give first dibs on food contracts to the visually impaired. The federal Randolph-Sheppard Act dates to 1936, when it was drafted to help secure work for disabled World War I veterans. Oklahoma adopted its version a year later.

Harlan said her agency will comply with the healthy food law — should it come to fruition — but she’s concerned about vendors who stock the machines. There are about a half-dozen machines in the Capitol alone.

Vendors fear losing customers who can’t buy what they like — a relatively simple concept in a market economy.

Vending machine patrons, they fear, will just get their fix elsewhere.

To illustrate the point, one vendor tested selling healthy foods in machines at an aeronautical center in Oklahoma run by the Federal Aviation Administration, Harlan said.

He took the unusual step of affixing apple stickers to the healthy choices.

Guess the most popular selection for snackers, now much more educated about their choices?

Harlan said her agency works with 25 vendors, which might seek like a lot, but she notes there’s already a shortage of businesses willing to take on the contracts.

“Just because they’re on state property doesn’t mean they’re not a business trying to make a profit,” she said.

As lawmakers weigh the fortunes of those businesses, they’ll have other questions to chew on:

In a state with one of the highest obesity rates in the country, according to the Centers for Disease Control and Prevention, should they dictate like finger-wagging adults what state employees and visitors eat?

And will Oklahomans, presented with healthy choices, resist the lure of junk food?

After all, even without the law, most people are probably savvy enough to know that a candy bar or bag of Skittles isn’t a healthy choice.

But, now that you mention Skittles …