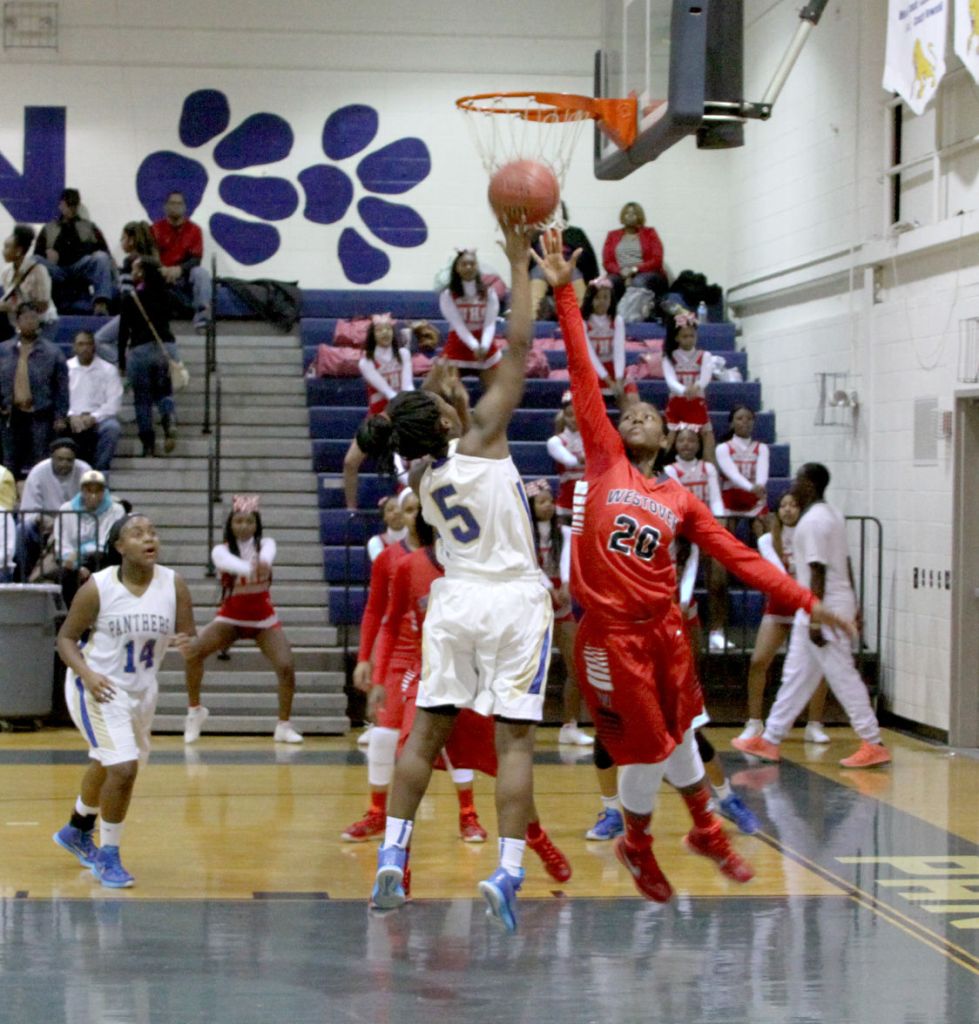 With the pair of wins, the ASCHS girls improve to 22-1 overall and 14-1 in region 1AAAA and preserve a nine-game winning streak.

The Lady Panthers got a slow start in the Jan. 30 match, with the Lady Patriots taking an early lead and hanging onto it for the entire first quarter. Westover took a 17-4 lead into the second frame. The Lady Panthers began to make up some ground in the second quarter. Timia Swanson and Amber Hicks contributed expert blocks in the first two minutes before Swanson executed a steal and made a fast break for the goal at the 5:30 mark. Westover responded with a lay-up before the Lady Panthers began a rally behind a Hicks free throw. Jy’kiera Long sunk the Lady Panthers’ first trey of the game and A’tyanna Gaulden followed with a perimeter shot. Swanson, assisted by Gaulden, laid another up to give the Americus girls 14. The Lady Patriots took a 22-14 lead into the locker room at half-time.

Westover opened the scoring on the second half with a lay-up at 7:00. The Lady Panthers’ Miya Crawford followed with a shot from the paint before Gaulden popped up a pair from the charity stripe and a lane shot of her own to narrow the gap to 20-24. Westover answered with a perimeter shot before Gaulden streaked through the remainder of the third quarter. Over the next minute and a half, Gaulden landed two field goals and a free throw to bring the Lady Panthers within one at 25-26. Westover put up a pair from the charity stripe with three seconds left to take a 28-25 lead into the final frame.

Gaulden stayed hot at the top of the final frame, adding a lay-up and a free throw to tie the score 28-28 at 7:40. Westover answered with two, but a hook shot from ASCHS’ Jakala Stevenson promptly evened it back up. Swanson contributed a pair of blocks before giving the Lady Panthers their first lead of the game (33-31) with a stolen lay-up and a free throw two minutes in. Gaulden followed with a shot from the lane and Crawford sunk one from the charity stripe before Westover added four points to retie the game at 36-36. Gaulden put two more points on the board with free throws and the Lady Patriots immediately responded with a perimeter shot to even it back up. This would be the last score for Westover in the match. The Lady Panthers were far from done, however, as Gaulden retook the lead with a lay-up at 2:30.

Swanson logged yet another steal and a rebound before Gaulden added a one point cushion from the free throw line. On their return, a Westover player lost control of the ball on a missed dribble. The packed house of Americus-Sumter fans went wild when Gaulden jumped on the ball and the referee pointed in the direction of the Lady Panthers’ goal.

Gaulden then drove the lane and took a shot that popped off the backboard. Crawford was in position under the goal and was able to snag the rebound which she immediately laid back up to bring the Lady Panthers’ lead to 43-38. Long capped off the scoring with a fast-break lay-up at the final buzzer to cinch the Lady Panthers’ 45-38 victory in the match.

The Lady Panthers geared up to travel to Sylvester the next afternoon and face the Lady Rams on their home turf.

Americus’ girls came out strong in the first quarter, posting 14 points and holding Worth to six. This set the tone for the next two frames as well. The Lady Panthers put up 20 in the second stanza and held Worth to eight, taking a 34-14 lead into half-time.

The ASCHS squad padded their already substantial lead in the third quarter with an additional 20 points. The Lady Panthers then brought out their second-string players in the fourth frame to gain some valuable experience. The Lady Rams posted a team-high 17 points in the final quarter, while the Lady Panthers only scored nine. ASCHS returned with a 63-37 victory.

Swanson paced the Lady Panthers in this match, scoring 20 points. Gaulden followed with 15 and Hicks joined them in double figures with 12.