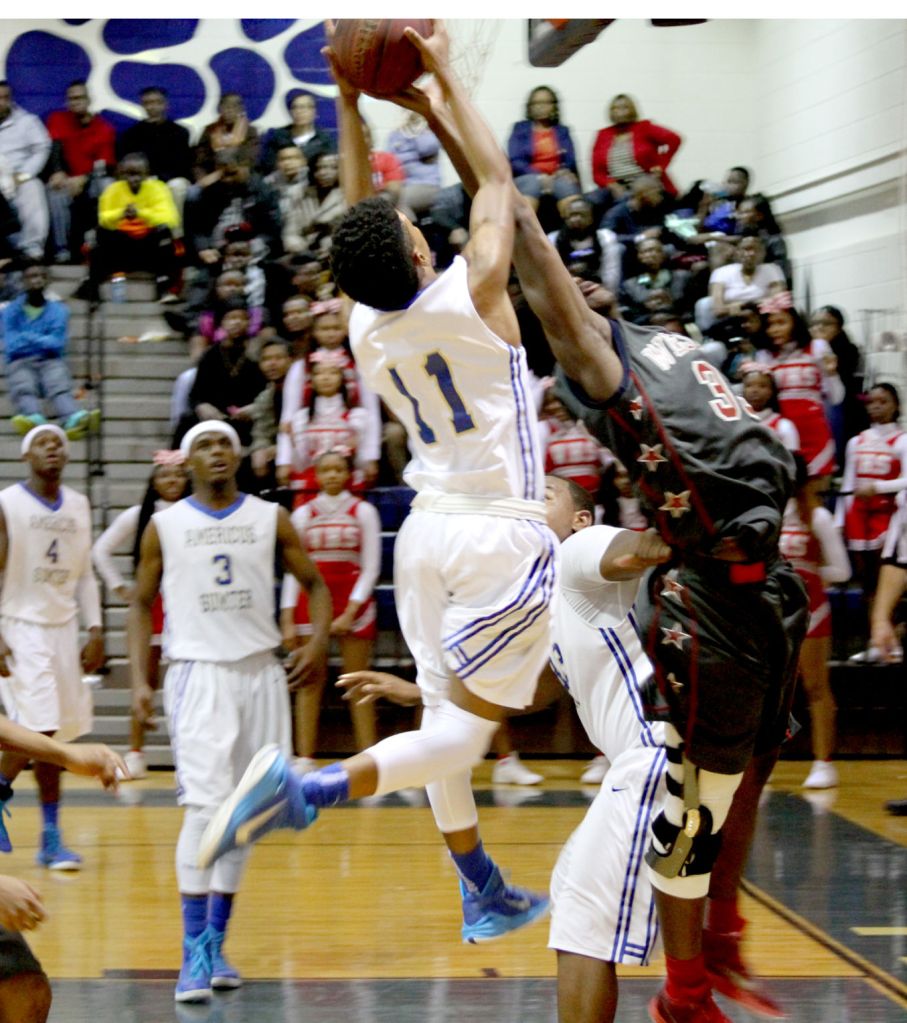 The Americus-Sumter Panthers pulled in an exciting 54-46 victory against the Westover Patriots on Jan. 30 in Americus. For Americus fans, the victory was sweetened by the fact that the Panthers fell earlier this season to the Patriots in a Dec. 13 contest.

The Panthers hit the boards the next afternoon, facing the Worth County Rams in Sylvester. The ASCHS boys won the away contest 63-53, marking the Panthers’ second defeat of the Rams this season.

The pair of region 1AAAA victories leave the Panthers with an overall record of 24-4 and a region record of 11-4.

The teams traded control of the ball for the first two minutes of play before Davis put the Panthers on the board with a lay-up. The Patriots responded with a pair of field goals to take the lead before Davis tied it up with a lay-up assisted by Harvey. The Patriots’ shooters heated up shortly thereafter, taking a 9-4 lead over the next two minutes. Daylon Leary (5) assisted King in a lay-up to break the Panthers’ silence.

With 1:30 left in the first quarter, Eric Hall (11) and Ben Walters (33) each contributed steals and King circled around the basket to put up a shot and bring the Panthers within one at 8-9. At the last second, Walters grabbed another steal and passed to Leary who scrambled to get a shot off for the lead. Leary’s shot bricked off the underside of the backboard as the buzzer sounded, leaving the Panthers down 8-9 going into the second quarter.

The Panthers came out fighting in the second frame and quickly pulled ahead with a lay-up by Walters followed by another by High. Westover put up two points before Hall managed a steal and broke for the bucket to add two more for the Panthers. Kiante Sims (12) padded the Panthers’ lead to 17-11 at the halfway point with a finger-rolling lay-up.

Over the next three minutes, Westover made a fierce comeback, scoring eight unanswered points and taking a 19-17 lead. With one minute left in the half, High assisted Mekall Yancie (2) in tying the score. Harris put up a pair from the charity stripe to put the Panthers ahead 21-19 going into half-time.

The Panthers returned to the court with a vengeance in the second half, with High and Davis opening the scoring before Leary nailed a three-pointer from the right side. By the 4:00 mark, the Panthers had amassed a 30-19 lead.

Westover answered at the 2:15 mark with a pair of lay-ups to narrow the gap and Harris immediately came back with a lane shot and a free throw. Westover landed a bucket from the paint at the buzzer to narrow the gap to 33-27 before entering the final stanza.

The fourth quarter started slow, with little action in the first minute. At the 7:00 mark, the Patriots stole the ball from the Panthers. King then sprung into action, stealing the ball back and launching it to Hall under the goal. Hall laid the ball up and Walters followed shortly after with another lay-up to put the Panthers up 37-27. Westover gained some ground with a pair of field goals before High drove the lane to retie it with a bucket. The Panthers were, once again up, by ten points; the team’s largest lead of the match.

With five minutes left, Westover sank a perimeter shot and began slowly creeping back up on the Americus squad. Harris, Walters, High, and King would all contribute to the 15 points that would round out the Panthers’ final score of 54. Westover would add only seven points in the final five minutes, bringing their final score to 46.

Harris led the Panthers’ scorers in the match, putting 13 points on the board. Davis and High followed close behind with eight each and King contributed seven.

The Americus crew traveled to Sylvester the following evening to face the Worth County Rams. The Panthers won a 63-53 road victory that evening in the region match.

The Panthers, still excited from the previous evening’s action-packed win, came out fighting and hit the Rams hard in the first quarter. The Panthers put 19 points on the board n the first quarter while holding Worth to nine and returned in the second frame to add 16 points to their score and only give up four. The ASCHS boys took a 35-13 lead into half-time.

Worth’s shooters woke up after the half and began to make a comeback. The Rams outscored the Panthers 19-12 in the third frame and 21-16 in the final quarter. While respectable, The Rams’ efforts turned out to be in vain as they could not overcome the deficit created in the first half.

Harris led the Panther offense in this game as well, posting 18 points. High was close behind with 17 points. Sims joined his teammates in the double-digits with 12 points.

Panther head coach, Michael Hoffpauir, spoke to the Times Recorder about the team’s impressive season, stating “This season has been a credit to the student-athletes that I have been so fortunate to coach. At the beginning of the season I asked them to be coachable and to develop a work ethic in which they gave me everything they had, whether in practice or a game. They have exceeded my expectations because of their effort. I’m really proud of them.”

The Panthers are a lock for the number two seed in the region post-season tournament behind Albany High. The team will return to the court for their final match of the regular season on Feb. 2 in Bainbridge. The Bainbridge Bearcats currently have a region record of 10-5 and dealt the Panthers a region defeat earlier this season on Jan. 3.