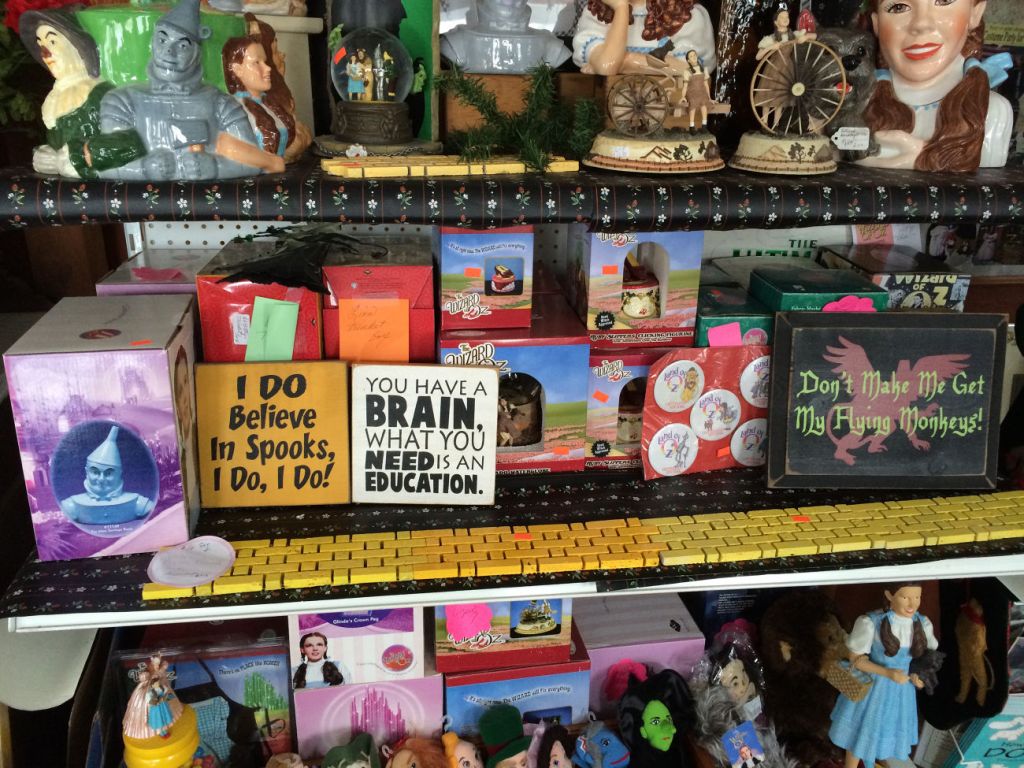 CHITTENANGO, N.Y. — The Native American tribe leading the movement to change the name of the Washington Redskins plans to open a $20 million casino that pays homage to the work of L. Frank Baum, who was born in this village outside Syracuse and later wrote “The Wonderful Wizard of Oz.”

Just one problem with the Oneida Indian Nation’s Yellow Brick Road Casino: A decade before Baum wrote one of this country’s most celebrated children’s tales, he campaigned for a Native American genocide.

“The Whites, by law of conquest, by justice of civilization, are masters of the American continent, and the best safety of the frontier settlements will be secured by the total annihilation of the few remaining Indians,” he wrote in late 1890 for the Aberdeen Saturday Pioneer in South Dakota. “Why not annihilation? Their glory has fled, their spirit broken, their manhood effaced; it’s better that they should die than live the miserable wretches that they are.”

Two weeks later, Baum, the newspaper’s publisher, reiterated his point in an editorial written after the slaughter of as many as 300 Sioux at Wounded Knee. He demanded that the U.S. government “wipe these untamed and untamable creatures from the face of the earth.”

So why would the Oneida — a small tribe that has condemned the Redskins for a name they consider patently racist — embrace the legacy of a writer whose own descendants have apologized for his patent racism?

That apology is the reason, said Oneida leader Ray Halbritter, calling the tribe’s future casino the product of reconciliation.

“I think that’s a wonderful message — that we’re able to overcome by repentance and by forgiveness,” Halbritter said. “It’s looking forward rather than backward.”

But some Native Americans have voiced astonishment over the tribute to Baum.

Ernestine Chasing Hawk, a descendant of the Wounded Knee victims, called the Oneida’s decision a betrayal.

“How can they be so ignorant of history and traitors to their own race?” she asked in an essay published in the Native American Times. “Would the Jews build a casino to honor Adolph Hitler?”

Halbritter insisted that the homage does not represent a “whitewashing of Baum’s writings,” but noted that his popular stories have noble themes and, obviously, immense commercial appeal.

“We are aware that some people have difficulty separating the good from the bad,” he said. “I think we can separate and try to extract the good and focus on the good.”

In the battle for moral high ground, those who oppose the name of the Redskins often note that it was given to the team by another racist, George Preston Marshall. Halbritter referred to the former owner as a “famous segregationist” in a December 2013 Post op-ed.

“The word is a slur that was screamed at Native Americans as they were forced from their lands at gunpoint,” Halbritter wrote, arguing that it was “unacceptable for a professional sports league to continue promoting such a derogatory epithet.”

In his two editorials, Baum most often referred to Native Americans as “Indians.”

Three times, though, he called them something else: “Redskins.”

In Chittenango, where the downtown sidewalks are paved with yellow bricks, any evidence of Baum’s diatribes is hard to find.

A weathered, wooden Tin Man welcomes visitors to the village in which Baum was born 158 years ago. The town of 5,000 holds an “Oz-Stravaganza!” festival each summer, and features a museum devoted to Baum called All Things Oz.

Many of Chittenango’s businesses also embrace Baum’s legacy. At the Land of Oz & Ends, a specialty antique shop, the shelves are stacked with themed kitsch: Wicked Witch shot glasses, Scarecrow “Ken” dolls and figurines with ruby slippers that click together as they play “Somewhere over the Rainbow.”

In 1888, Baum left New York and moved his family to South Dakota, determined to succeed in the burgeoning West. He opened a variety store, Baum’s Bazaar, but when it failed, he took over a weekly newspaper at a time when violence often erupted between whites and Native Americans. That climate of intense fear, his biographers say, may help explain his hateful rants.

“He was just reflecting back the ethos of the time,” said Evan Schwartz, author of “Finding Oz: How L. Frank Baum Discovered the Great American Story.” “This was not an unusual thing to say, it was just unusual that it was L. Frank Baum, and we’re looking at it in the context of today.”

Still, even in the context of that age, those who have studied Baum’s life struggle to understand his motivation.

His mother-in-law, Matilda Joslyn Gage, was a central figure of the women’s suffrage movement and a significant influence on Baum. At almost the exact same time he called for the mass murders of Indians, Baum was campaigning for women’s rights.

“The key to the success of our country is tolerance,” Baum wrote in an editorial that appears in Schwartz’s book. “Bigotry, if not wholly unknown, is so intolerable, as to be nearly entirely suppressed.”

Baum published his first controversial editorial soon after the death of Sitting Bull, who, in the author’s estimation, was the last Indian worthy of life.

“With his fall the nobility of the Redskin is extinguished,” Baum wrote, “and what few are left are a pack of whining curs who lick the hand that smites them.”

The ensuing carnage at Wounded Knee drew no sympathy from Baum, who argued that only genocide would prevent a vengeful Indian uprising.

“Baum’s vicious response was a kind of madness,” wrote Rebecca Loncraine, author of “The Real Wizard of Oz: The Life and Times of L. Frank Baum.” “His thoughtless comments were incoherent, full of the pain and frustration of his own life out on the prairie.”

His newspaper soon closed, and Baum, then a failure in all he had pursued, moved back East. There, a decade later, he introduced readers to the world of Oz, penning 14 books in the popular series.

In 1919, Baum died famous and successful, achieving even more notoriety two decades later when “The Wonderful Wizard of Oz” was made into a movie. According to the Library of Congress, it is the most-watched film of all time.

And yet, the editorials so deeply stained his legacy that — 87 years after he died — two of his descendants traveled to a South Dakota reservation in 2006 to ask for forgiveness. Gita Morena and Mac Hudson apologized to Sioux families whose ancestors were killed in the massacre.

“We stand before you and before the citizens of both our great nations to suggest,” their statement read, “that ‘The Wizard of Oz,’ a great American fairy tale, and the Massacre at Wounded Knee, a great American tragedy, be forever joined in the hearts, minds and memories of all our people.”

The Oneida, a tribe of just 1,000 members, have ruled gambling in central New York for two decades.

Turning Stone Resort Casino sprawls over 3,400 acres of Indian land 30 miles east of Syracuse and attracts more than 4.5 million guests a year. With its four hotels, 72 holes of golf and enough gaming space to hold two football fields, the casino would look at home on the Las Vegas Strip.

Turning Stone generates hundreds of millions of dollars in revenue for the Oneida, which has helped fund the “Change the Mascot” campaign for nearly the past two years. The tribe has commissioned studies, hosted a symposium, paid for radio ads in cities where the Redskins are playing football and supported a bevy of demonstrations nationwide.

But the tribe’s highly profitable stranglehold on gaming in central New York could be nearing its end.

In mid-December, a state board recommended that three non-Indian casinos receive casino licenses, including an extravagant $425 million project planned to open 45 miles west of Syracuse.

Less than a week later, Halbritter announced the Yellow Brick Road Casino, a more casual and much smaller gambling venture than Turning Stone. It’s scheduled to open this spring and offer 430 slot machines, a 500-seat bingo hall, two dining options, a bar and a general store — all paying tribute to Oz.

The tribe, which has also sponsored the village’s annual festival, chose the theme in part because it honors Chittenango’s central identity, and the Oneida wanted local support.

“We think this can be mutually beneficial,” said tribe spokesman Joel Barkin. “With any development project, if you have buy-in from the town and the political leadership and the community, that’s always better.”

But the Oneida also recognized a potentially lucrative business opportunity. The Oz brand has immense marketing value. News of the casino appeared in the Guardian, the Boston Globe and the New York Times.

“It went kind of crazy when we announced it,” Barkin said. “There are few things that are more Americana than ‘The Wizard of Oz.’ ”

The location also provides the Oneida a competitive advantage over their would-be rival.

They own thousands of acres in central New York, but few parcels are more accessible from Syracuse, the region’s hub, than the selected site along Route 5. Drivers from the city can reach Chittenango in just 25 minutes — about half the time it would take them to reach the anticipated non-Indian casino.

Chittenango Mayor Ronny Goeler said he hopes the casino, expected to create 250 jobs, will revitalize a place that has struggled for a decade.

First, a highway project diverted traffic away from downtown, then came the recession. Some businesses didn’t survive, including Oz Cream and the Emerald City Grill.

Maybe, Goeler said, the Oneida can change things. “I thought it was great,” he said, “that someone wanted to invest that much time and money and energy into our village.”

But, given Baum’s racism, not everyone here supports an Oz-themed Indian casino.

Doug George-Kanentiio, a Native American and frequent Halbritter critic, scolded the tribe in a letter to the Oneida Daily Dispatch.

“Given that the Oneida Nation has been an advocate for the removal of offensive mascots such as the Washington Redskins,” he wrote, “the decision to call its proposed casino after Baum is as shocking as it is contradictory.”

Not so, said Halbritter. Baum’s descendants apologized. What led to the 67,000-square-foot gambling house, he insisted, is that contrition.

So, in a parking lot next to a Dunkin’ Donuts, guests will soon arrive to a renovated shopping center that at the moment resembles an aging high school. According to a rendering of the casino, visitors will walk past a multi-colored wall, entering beneath an extended portico wired with bright lights.

And overhead, next to an expansive sign, the image of a road will spiral until its yellow bricks fade away.