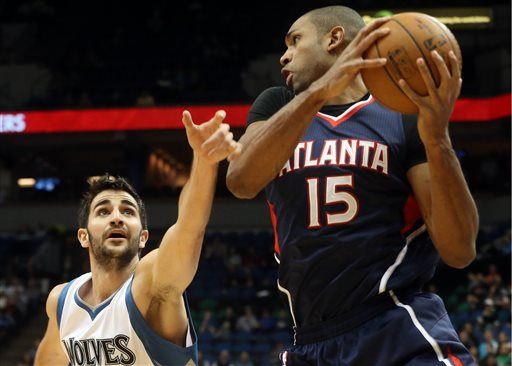 MINNEAPOLIS (AP) — One night earlier, Al Horford, Paul Millsap and the Atlanta Hawks were off their game.

But if anything has been established during the first half of this NBA season, it’s that nothing keeps these Hawks down for long.

Horford scored a season-high 28 points and grabbed eight rebounds, and DeMarre Carroll added a career-best 26 points to lift Atlanta to a 117-105 win over the Minnesota Timberwolves on Feb. 9.

Millsap had 19 points, nine rebounds and seven assists for the Hawks (43-10), who bounced back from a loss to Memphis the previous night. Horford and Millsap were a combined 4 of 21 for 10 points against the Grizzlies but went 19 for 31 against the Wolves.

The Eastern Conference leaders still have not lost back-to-back games since Nov. 18.

“Al and Paul are both high-level players that have been very, very consistent. I think that’s been one of their trademarks,” Hawks coach Mike Budenholzer said. “I think they both wanted to come out and have a good start and help our group, and (they) found a way for all of us to play better.”

Kevin Martin scored 21 points and Shabazz Muhammad had 18 points and eight rebounds for Minnesota in his first game since Jan. 9 because of a strained oblique. The Timberwolves lost for the first time in four games.

“They pretty much manhandled us at every position,” Wolves coach Flip Saunders said.

The Wolves pulled within 12 early in the fourth quarter, but Horford scored nine straight for Atlanta to end any threat.

“It’s rare, but you’re going to have nights like that sometimes, every now and then. … The shots I took today were no different than last night, today they just happened to fall,” Horford said. “It’s hard to explain.”

Andrew Wiggins had 15 points and six rebounds and Gorgui Dieng had 12 boards and five blocks for the Wolves, who outrebounded Atlanta 50-36 and grabbed 23 offensive boards. The Wolves were starting to build some momentum with wins over the Heat, Grizzlies and Pistons after getting Nikola Pekovic, Martin and Ricky Rubio back from long absences.

But the Hawks brought them back down to earth.

If the Hawks have shown any weakness, it’s been on the boards. Almost 15 percent of their points allowed this season have been scored on second chances, the worst percentage in the league. They were hammered on the glass by Memphis on Sunday night, 55-37, and outscored in second-chance points 22-6.

It was more of the same in the first half Monday. Wiggins and the Timberwolves crashed the glass every time the ball left a teammate’s hand, racking up 12 offensive rebounds in the first 17 minutes. Dieng’s putback gave Minnesota a 45-38 lead in the second quarter, but the Hawks responded with a 20-5 run to start to pull away.

“Offensively, I thought we were in a pretty good place all night,” Budenholzer said. “It’s just if we could find a way to get some stops and get some boards, we might be able to get some separation.”

Hawks: Jeff Teague was questionable going into the game after tweaking his left ankle against Memphis, but started and finished with 12 points and seven assists in 32 minutes. … Atlanta shot 51 percent and outscored Minnesota 58-44 in the paint.

Timberwolves: Rubio had eight points on 3-for-11 shooting and five assists in 26 minutes. He sat out Sunday’s win at Detroit because doctors had not cleared him to play in back-to-back games yet after missing 42 with an injured left ankle. … Glenn Robinson III was the first healthy Wolves scratch since Nov. 7.

Muhammad was one of the bright spots for the Wolves through the first half of the season, but he missed 16 games with his oblique strain. He hit his first shot of the game and went 7 for 14 in 24 minutes.