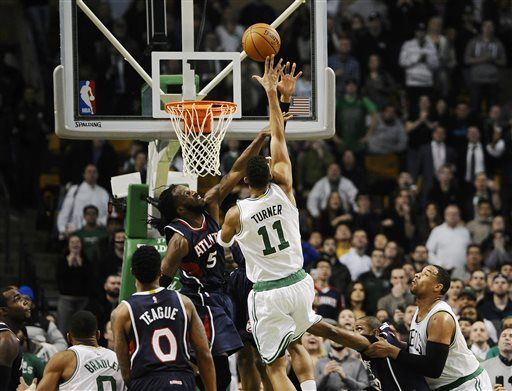 BOSTON (AP) — Boston Celtics coach Brad Stevens wasn’t about to put too much importance on his team’s comeback victory over the Eastern Conference-leading Atlanta Hawks.

“For 47 minutes, 59.8 seconds, we were the losing team,” Stevens said on Feb. 11 after Evan Turner’s scoop shot with 0.2 seconds left gave the Celtics their only lead and lifted them to an 89-88 victory over the Hawks.

It was just Atlanta’s third loss of the calendar year, but all three have come in the last 10 days following a 19-game winning streak that propelled them to the NBA’s best record.

“I don’t think they played their best game,” Stevens said. “They’ve been on the road for three games; they’ve had a miraculous couple of months of basketball. They missed some shots late, and we were fortunate.”

Jared Sullinger had 17 points and 15 rebounds for the Celtics, who have won four of five. Turner had 12 points, nine assists and seven rebounds.

Al Horford scored 22 points and added 12 rebounds for the Hawks, who still have the most wins in the NBA. They will send an NBA record-tying four players to the All-Star Game in New York; the last team to place four players on the All-Star roster was Boston, in 2011.

This year’s Celtics have no All-Stars, and they remain out of playoff position.

“It’s been a good first half,” Hawks forward Paul Millsap said. “But it’s definitely not the way we wanted to end this half, going into the break with a loss against a team that we know we should’ve won. Especially blowing a lead like that.”

Atlanta scored the first nine points of the game and nursed the lead through most of the next four quarters. The Hawks led by 14 with just over 7 minutes left before Boston scored the next eight points. It was 84-75 when the Celtics ran off seven in a row, including a 3-pointer from Marcus Smart with 2:12 to play that made it a two-point game.

Avery Bradley made a 3-pointer to cut an 86-82 lead to one point, then the teams traded baskets and misses.

Jeff Teague missed a runner with 15 seconds left, and the Celtics called a timeout with 6.4 seconds on the clock. Turner dribbled at the perimeter before cutting into the lane and floating in a seven-footer just before the buzzer.

The Hawks had a chance for a tip-in, but the inbounds pass was knocked harmlessly away by the defense.

The Hawks seemed to leave early for the break. They led by 11 points heading into the fourth quarter, and by 14 with 7:20 left.

“We were just going through the motions, weren’t really playing hard,” said forward DeMarre Carroll, the only Hawks starter who didn’t make the Eastern Conference roster in New York this weekend. “So that’s what happens when you take any NBA team not seriously.”

They also committed six turnovers in the fourth quarter alone.

“I think we lost some of our discipline, some of the things that we emphasize and do every day,” coach Mike Budenholzer said. “But I think you always give your opponent credit. There’s a reason why we weren’t as disciplined and as good as we need to be.”

Celtics: The Celtics shot 18.5 percent in the first quarter, including 1 of 11 from 3-point range. They finished with 32.3 percent shooting. … Kelly Olynyk missed his 11th straight game with an ankle injury. The Canadian said he would not play in the Rising Stars Challenge at the All-Star Game in order to get an extra week of rest.