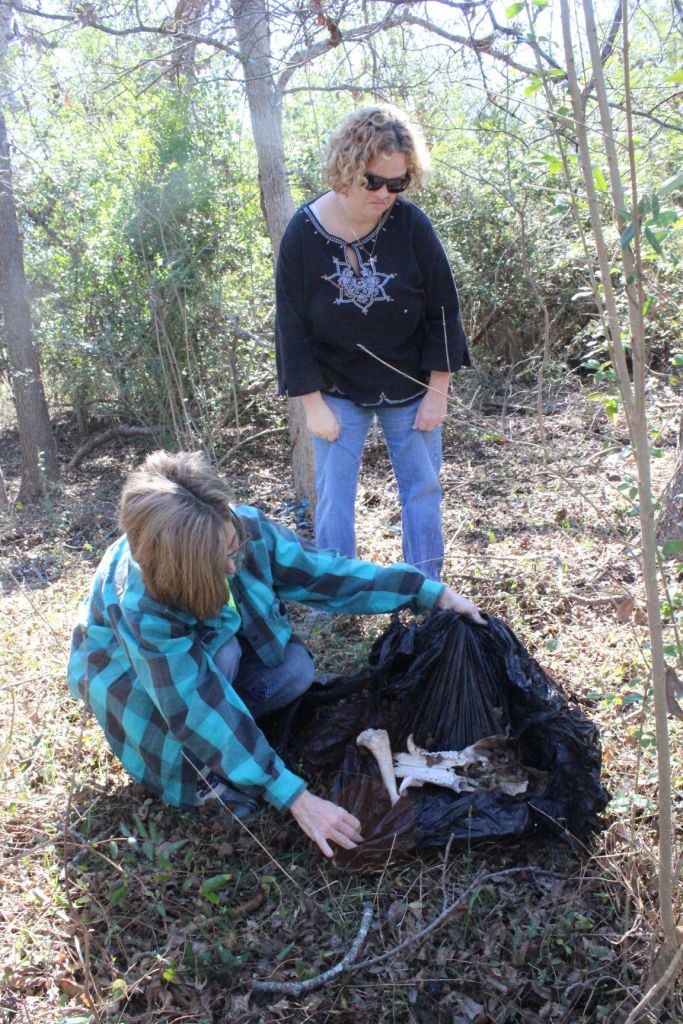 It was like a scene out of the television show CSI. Vikki Raincrow of Rio Vista, Texas, was searching through the woods when she came upon a grizzly discovery.

“I came over the ridge here,” Raincrow said Tuesday. “And started shouting, ‘Bones. Bones.’ It was like a large crime scene out there.”

Raincrow, a self-described animal activist and pet foster parent, was walking through Old Foamy Road near Cleburne, Texas. She was part of a group that had been in the area Friday looking for the last of a litter of about eight puppies dumped on the roadside about a month ago. They had been trying to round up the final two puppies for weeks, trying to coax them to safety.

“They were scared to death of people,” Andrea Hall said. “I had to stand by the road stopping traffic because they were whizzing back and forth across the road. I don’t see how people have the heart to leave animals out here like this.”

While searching for the dogs, Raincrow said she stumbled upon dozens of dog skulls and bones on two blue tarps. Other bones laid nearby including several plastic garbage bags of bones.

“Someone just wrapped dogs in bags and threw them back here,” Raincrow said. “It’s ridiculous. There’s pets dumped out here all the time. Not to mention all the trash, beer bottles and mattresses people throw out here. I wish they could cut some of this stuff back, put up some lights and cameras to catch the people who do this. That would help stop it.”

Although the road runs close to Cleburne, the area in question sits in unincorporated county. It has become the unofficial last stop for abandoned pets — a gruesome pet cemetery of sorts

“We’ve had people drag dead horses out there and dump them, along with dumping cats and dogs,” Johnson County Precinct 1 Commissioner Rick Bailey said. “Unfortunately, it’s a growing problem and it’s — I don’t know how to describe it — just the callous and cowardly way some people choose to dispose of unwanted animals.”

The subject of the need for a county animal shelter has arisen during recent commissioner and county judge elections. Although nothing is in the works yet, Bailey said something needs to be done, adding that the problem will only increase as the county grows.

Johnson County Sheriff’s Office Detective Steve Shaw said the instances of dumping on Old Foamy Road have been on a decrease of late. He said it’s down from three cases a week to maybe two a month.

However, Shaw said residents dropping off animals, dead and alive, is still a problem throughout the county.

“We filed on a couple recently who dumped two dogs out near [another part of the county,]” Shaw said. “They left a sack of dog food for the dogs, but left it on the railroad tracks.”

People caught dumping animals face illegal dumping charges in addition to cruelty to non-livestock animal charges, Shaw said. The problem, as with trash dumping, is that such cases are often hard to prove.

“You have to prove who dumped or who gave the permission to dump or who transported the stuff,” Shaw said.

Despite that, Cleburne acting Police Chief Amy Knoll said the law is the law.

“It’s absolutely illegal,” Knoll said. “And there are also state laws covering dumping and cruelty to animals. It’s horrible to see these cases. The thing is, there’s no need for it. It’s all about responsible pet ownership, which means having your pets spayed and neutered is the best way to deal with this. Then you don’t have unwanted litters who too many times end up being dumped or thrown away or put down.”