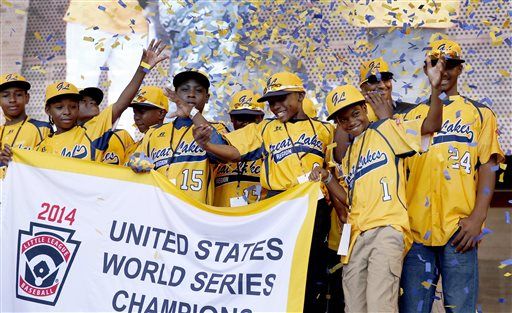 CHICAGO (AP) — A Little League team that captured the attention of the nation and the hearts of its hometown was stripped of its national title Wednesday after an investigation revealed that team officials had falsified boundaries so they could add ineligible players to the roster.

Only last summer, the all-black Jackie Robinson West team was the toast of Chicago and was honored with trips to San Francisco and to the White House.

But the sport’s governing body announced that team officials had engaged in a Little League version of political gerrymandering. Instead of politicians redrawing district maps to pick up votes, it was local league officials who changed the boundaries that determined where players must live. And after learning that their scheme had been exposed, they scrambled to persuade surrounding leagues to go along with what they had done.

“This is so heartbreaking,” said Stephen D. Keener, president and CEO of Little League International. “It is a sad day for a bunch of kids who we have come to really like … who did nothing wrong.” But “we cannot tolerate the actions of some of the adults involved here.”

The organization suspended the manager, Darold Butler, and suspended the team from Little League tournament play until the local league’s president and treasurer have been replaced. A district official who is believed to have helped change the boundaries was also removed.

“I’m super proud of the boys and what they did,” Butler told the Chicago Sun-Times. “They always will be champions in my eyes, and they’ll always be champions in a lot of people’s eyes. They did it on the field in between the lines, and I’m the proudest coach in the world to be a part of a group of 13 boys like that.”

All of the team’s victories were thrown out, meaning that the wins will be awarded to other teams. Mountain Ridge Little League, the team from Las Vegas that lost to Jackie Robinson West in the national championship game, will be awarded the title.

Parents were angered by the news, saying their children were being unfairly punished.

“The boys had no inside dealings … about any borders, and I as a mother had no idea there were any (questions about) boundaries,” said Venisa Green, who was driving her son, Brandon, to school when they were “blindsided” by the news as it came over the radio.

“We weren’t involved in anything that could have caused us to be stripped of our championship,” said Brandon, appearing at a news conference with his mother.

Venisa Green said the move was especially disheartening because the team was part of efforts to keep children safe and prepare them for college in a community better known for gangs and drugs than any kind of achievement.

“What would you have us do, Little League, for them to be killed on the streets of Chicago?” she asked.

She wondered if the fact that the players were black had any role in the ruling, something that the Rev. Jesse Jackson and others questioned as well.

“Is this about boundaries or race?” Jackson asked.

Jackson did not discuss whether he blamed any league officials for what had happened, but in Washington, White House spokesman Josh Earnest suggested that it was the adults who let down the boys.

“The fact is, you know, some dirty dealing by some adults doesn’t take anything away from the accomplishments of those young men,” he said.

The Chicago Cubs said they would not ask that donations it made to the Little League team be returned.

“We can only imagine this was an extremely difficult and heart-wrenching day for these talented young athletes, but we hope they will continue to play this wonderful game of baseball for years to come. The game is counting on it,” spokesman Julian Green said in a statement.

It was a stunning end to a story that began last summer as the team marched through the Little League tournament. Their odyssey ended with a loss to South Korea in the world championship game in South Williamsport, Pennsylvania.

For days, Chicago was enthralled by the story, in large part because the team was from the city’s South Side, an area that has a reputation in much of the country for being synonymous with crime and gun violence. They were part of one of the most heartwarming World Series in Little League history, with the country rooting for Jackie Robinson West and a team from Philadelphia that had Mo’ne Davis, a star pitcher who was the first girl to appear in the series for a U.S. team since 2004.

When the Chicago team returned home, the boys were treated as conquering heroes. Thousands of people lined city streets to catch a glimpse of them as they were paraded by bus from their home field to a downtown park. The team was treated to a trip to a major league World Series game in San Francisco and then a visit with President Barack Obama and first lady Michelle Obama at the White House.

Behind the scenes, Keener said, the investigation was creating a different story after a coach from a nearby suburb alleged that Jackie Robinson West had violated rules by poaching top suburban players.

The investigation, which was first reported by DNAinfo.com, appeared to end in December when the national organization said it had uncovered no violations. Officials said they would reopen the inquiry if new information surfaced. About that time, the organization learned of questions about boundary maps involving multiple leagues. The investigation resumed.

In an interview, Keener said Jackie Robinson West officials expanded the boundaries of their league at the expense of three neighboring leagues, so that the boundaries included the homes of several players on the team who would not otherwise have been eligible.

The investigation found that at least one district official who had helped redraw the map went to the other teams to ask that they go along with what the team had done, Keener said.

“They (said) ‘We know we took your territory. We shouldn’t have done it, but will you give it to us’ to essentially legitimize it,” Keener said.

The other leagues refused, he said.