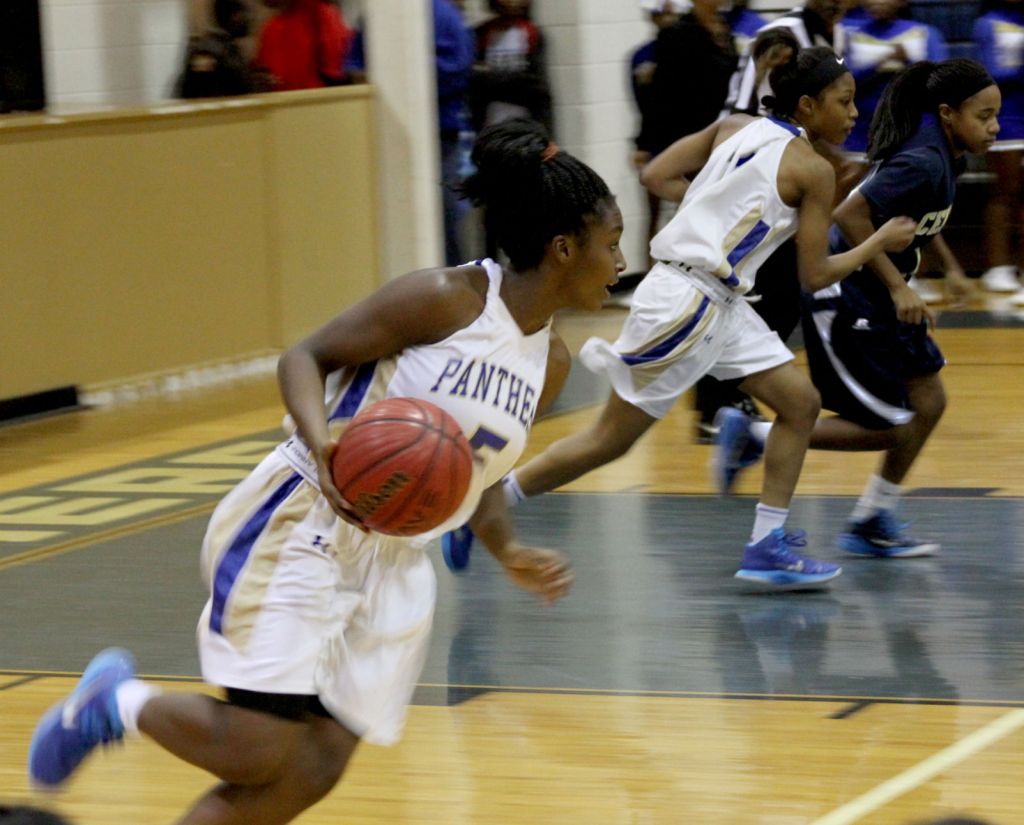 The Americus-Sumter Panthers and Lady Panthers both brought their “A” game to the court on Feb. 10 for their first matches of the region 1-AAAA tournament. The Panthers used all of their experience gained throughout the season to bring home a 51-49 come-from-behind victory against the Bainbridge Bearcats in the first round of the region tourney at Albany High School. The last-second victory solidifies the Panthers’ spot in the state tournament and pushes them into the region semifinals, facing the Westover Patriots on Feb. 12.

The Lady Panthers continued their strong tradition of excellence on the court, bringing in a whopping 77-43 victory in a home match against the Thomas County Central Lady Yellowjackets. With the massive win, the Lady Panthers move on to the next round of the semifinals, facing the Westover Lady Patriots on Feb. 12 in Albany.

The Panthers got a slow start in their match, while Bainbridge came out gunning for the win. The Bearcats put up 13 and 16 points in the first and second quarters, holding the ASCHS boys to 11 and nine, respectively. The Panthers trailed 20-29 gong into the second half.

After the break, Americus-Sumter’s boys returned to the court with a renewed vigor and determination not to go down without a fight. Little-by-little, the Panthers clawed their way back into the game, outscoring the Bearcats 10-8 in the third frame.

Coach Hoffpauir and the Panthers saved the best for last, mounting a hard offensive in the fourth stanza that kept the Bainbridge boys on their toes. By the final seconds of the game, the Panthers had puled within three, trailing 46-49.

At this point, Panther senior Dwight Harris went up for a shot from beyond the arc and was fouled in the process, earning him three shots from the charity stripe. Americus-Sumter fans held their breath as Harris lined up and drained each of them to tie the game 49-49.

With less than two seconds left on the clock, Bainbridge launched the ball down the court in an attempt to pull ahead before time ran out. The ball missed its mark and bounced out-of-bounds, leaving the Panthers to bring it in under their own goal. With 0.8 seconds left on the clock, the Panthers brought the ball in and scrambled to take a final shot. The ball bounced around the rim, and the crowd erupted in cheers as Panther junior Mekall Yancie leapt up and tipped it in, sealing the victory for the Americus squad.

Americus-Sumter school system superintendent Donnie Smith spoke with the Times Recorder after the match, stating “That was one of the best games I have ever seen!”

Harris led the Panthers’ offense in the match, putting an incredible 25 points on the board. Freshman Eric Hall followed him, adding seven points.

The Lady Panthers took to the court for their match with the quick, potent style of play that ASCHS fans have come to expect from the girls’ team. Their methods were effective once again as the Lady Panthers walked off the court with a 77-43 victory over Thomas County Central at the contest’s end.

With their usual starting line-up of juniors Myia Crawford, Amber Hicks, Jakala Stevenson, A’tyanna Gaulden, and sophomore Timia Swanson, the Lady Panthers stormed the court like a typhoon, ready to wash over the Lady Yellowjackets.

One minute into the game, the Americus girls opened the scoring when Stevenson stole the ball and passed to Gaulden, who made a fast break for a lay-up.

Thomas County answered with a 5-0 run over the next two minutes before Hicks broke the silence with a pair of free throws to put the Lady Panthers down 4-5. TCC pulled ahead once more with a lay-up before freshman Jy’kiera Long came off the bench to sink a basket. Hicks tied the score 7-7 with another free throw shortly after. The Lady Panthers then proceeded to go on a 10-3 run through the rest of the quarter.

The Americus girls continued to build an impressive cushion over the next eight minutes, scoring 32 points in the second quarter and holding the Lady ‘Jackets to only eight.

The streak didn’t stop there, however, as the Lady Panthers widened the gap even further in the third frame, putting 19 more points on the board and holding Thomas County Central to seven.

Thomas County had their most lucrative period of the game in the fourth frame, posting 18 points and bringing their final total to 43.

Gaulden put 20 points on the board for the Lady Panthers in the match and gained five assists and five steals. Swanson landed a double-double in the contest, contributing 16 points and 11 rebounds alongside six steals. Sophomore Amber Stewart added 12 points and Long posted 11. Long led the team from beyond the arc, draining a trio of three-pointers.

With their victories, the Panthers and Lady Panthers moved on to the third round of the region tournament, facing the Westover Patriots and Lady Patriots in Albany on Feb. 12. The results of these matches were not available at the time of this writing.