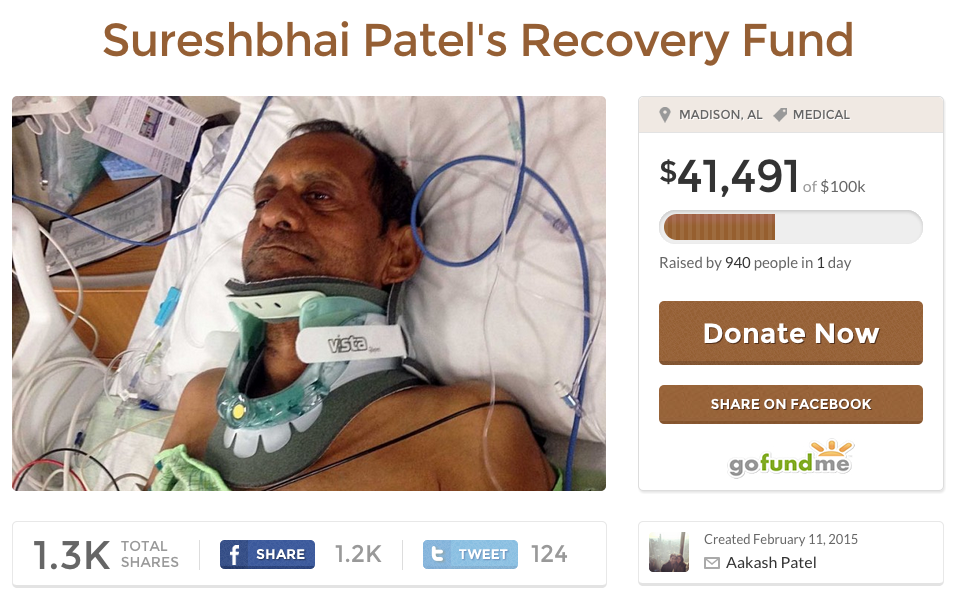 A Madison, Alabama police officer has been charged with third-degree assault and faces termination after an incident that left 57-year-old grandfather Sureshbhai Patel partially paralyzed.

Patel, a farmer and a native of India, had arrived in Madison just six days earlier to help his daughter-in-law take care of a 17-month-old child, who had health problems, while his son worked.

Patel was reportedly out for a morning walk when police stopped him Feb. 6. Officers were called to Hardiman Place Lane after a resident called 911 to report “a skinny black guy” walking down the sidewalk, looking in residents’ garages.

“I’ve lived here for four years and I’ve never seen him before,” said the unidentified male caller to a female dispatcher.

A press conference was held Thursday, at which Madison Police Department officials played dashboard camera video and audio recordings — including the initial 911 call — for members of the media.

Video of the incident showed two officers approaching Patel, who was wearing a wool cap on his head and a light-colored sweater. They begin asking questions, but Patel does not speak English. At one point, a third officer arrives on the scene.

Later in the video, the two responding officers are on either side of Patel and tell him not to jerk away. The video then shows Patel being violently thrown to the ground by Parker, who was on Patel’s left side.

The video of Patel being thrown to the ground was captured by the dashboard camera of a third officer pulling up to the scene. That footage also shows Patel being sat in an upright position.

In audio recorded immediately after the incident, Patel is asked if he bit his lip, while an officer seems to be wiping Patel’s face. The video shows officers trying to lift Patel off the ground, but he appears to be unable to stand. An officer then asks for a medic.

Patel suffered severe neck injuries as a result of the confrontation. After arriving at the hospital, he went underwent a cervical fusion and is reportedly regaining some feeling in his arms and one leg.

Officer Eric Sloan Parker, the officer charged with assault, turned himself in to the Limestone County Sheriff’s Office Thursday.

“For that reason, I sincerely apologize to Mr. Patel, Mr. Patel’s family and our community,” Muncey said. “We strive to exceed expectations.”

Muncey said Parker was served with disciplinary action from the department, and Muncie said he recommended he be terminated.

The Federal Bureau of Investigation will also be conducting an inquiry, Muncey said, to determine if Patel’s civil rights were violated in the arrest.

Also on Thursday, Patel filed a federal civil rights lawsuit against the city of Madison and the two responding police officers.

The man’s attorney says he speaks little English and was accosted because of his skin color.

On Wednesday, a gofundme account was started in Patel’s name to help pay for his medical costs. The crowd-funding page has a goal of $100,000. More than $40,000 had been raised through more than 900 donations by Friday morning.

Adam Smith writes for the News Courier in Athens, Ala.