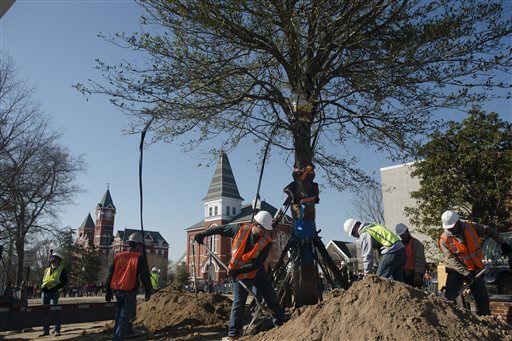 AUBURN, Ala. (AP) — Hundreds of Auburn fans gathered before dawn Saturday to watch as workers planted new live oaks to replace trees killed by a University of Alabama fan.

Al.com reports (http://bit.ly/17yvd5N ) onlookers cheered as the new trees arrived on a flatbed trailer Saturday morning. Hoover resident Marcia Frinkel said she wanted to be there for the historic event.

“We just wanted to be here for it and see the new trees planted,” she said. “I don’t think we’ll ever get the chance to see this again.”

Auburn fans traditionally roll Toomer’s Corner with toilet paper after victories, but the university is asking them to stay away from the new trees until fall 2016 so they’ll have time to take root.

“It’s not just a tree, it’s symbol of Auburn,” said Tommy Pinkard, an Auburn junior. “It’s a family here, and when you do something to one of us you do it to all of us. So the trees really have a lot of meaning, especially since you had someone take away what meant so much to everyone.”