Guacamole drama may keep rocker Jack White away from Oklahoma 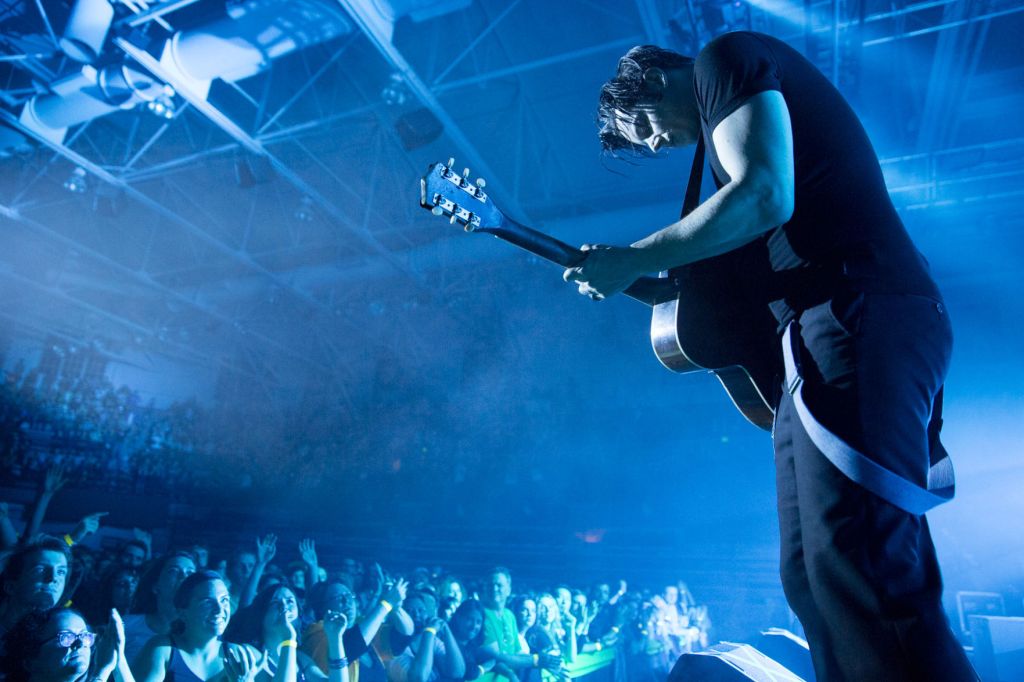 When a heavy hitter like Jack White comes to Norman (Ok.), it’s a big deal.

On the heels of a show at the legendary Madison Square Garden in New York, the eminent rock revivalist made the 1,500 mile journey to play at the University of Oklahoma’s McCasland Fieldhouse Feb. 2. How does somebody shift gears from playing one of the most recognizable stadium landmarks in the country to a venue that, nationally speaking, most people have probably never heard of?

Well, money might be the easy answer. After all, OU paid him an $80,000 fee. An easy answer, but not the right one for the multi-millionaire musician, producer, actor and record store owner

According to White’s tour rider, a document made public through the Freedom of Information Act and published by the OU Daily (much to the chagrin of White and his touring company) the university also ponied up his requisite performance accouterments, which included the following stipulations:

• “This is a NO BANANA TOUR. (Seriously.) We don’t want to see bananas anywhere in the building.”

• There needs to be one pound of “freshly sliced, high-quality prosciutto and aged salami with a sharp knife.”

• “NO FLUORESCENT LIGHTING” in the artist and VIP areas.

• No photos of White inside or directly outside the venue.

• A New York strip steak, cooked medium, that needs to be made or picked up just before the show ends.

• Homemade guacamole to be prepared with a very specific recipe

The social media and internet hive mind made a big stink about the guacamole. And while those may seem like outlandish requests, as far as performers go that scores pretty low on the megalomaniacal diva scale. It doesn’t come close to Van Halen’s M&M stipulations and everywhere he plays is willing to make those concessions.

So, again, it must be something else.

That’s a joke, really. That’s what bands get until they don’t need it anymore, but for the sake of argument …

If someone hasn’t heard of Jack White at this point, they’re just not matching the name with songs they’ve heard countless times. Every stadium around the world chants “Seven Nation Army,” which went from smash hit to cross cultural phenomenon at the World Cup in South Africa. “We’re going to be friends” is instantly recognizable after appearing in the opening credits of cult classic “Napoleon Dynamite.” He played Elvis in “Walk Hard: The Dewey Cox Story,” a brief scene, but still. He dated Renee Zellweger for a stint, so even People Magazine readers, a weird spot in this Venn diagram, have heard of him.

The list goes on, so … that’s not it either.

The man is enigmatic. So too are his reasons. Reasons for screaming feedback, affected accents, overdriven antique acoustics and the high side of the whammy pedal octave. There are reasons for all of it. But as for why he came to Norman, Oklahoma of all places, there can be only one.

McCasland Fieldhouse played host to OU’s hardwood warriors for years. It also played host to Jimi Hendrix, Sinatra and Elvis. That’s what brought him here. It was evident through his passion and even more so when he paid homage to Woody Guthrie and Wanda Jackson by teasing a couple of bars here and there.

It makes sense for a guy who made a name for himself playing a plastic Airline guitar bought from Montgomery Ward and a Sears Silvertone amplifier from the 1960s. Shiny and new? Not for him. A raucous concrete box packed to the rafters isn’t for everybody. And neither is he. After the show, I overheard rumblings that the show was unpolished. That it “sounded like a garage band.” That it “sucked.”

Do you think Hendrix sounded tight and well rehearsed during his now locally mythic McCasland performance?

The answer is no. Yet, he is celebrated. He should be, of course. And, so should Jack White.

Before the show, one of his crew members asked the audience to embrace the moment, to put away their phones and “be here.”

Even though White was disheartened by his tour rider being leaked, he managed to drown it all out with the equivalent decibel energy of an exploding star, kicking out new tracks and old school jams as far back as “Ball and a Biscuit.”

By the time the ringing in our ears had subsided, we learned that it might not happen again. At least not anytime soon. After coming down hard on The OU Daily’s unwelcome publicity and releasing a statement nixing any future OU shows for all the artists under the Monotone Inc. umbrella, his touring company followed up with this:

To the students and staff of University of Oklahoma:

Jack White would love to thank all the concert attendees at his performance at the University of Oklahoma. The crowd was incredible and Mr. White played an extensive two and a half hour show for them. The students who helped organize the event were wonderful. Playing in, and for, the people of Oklahoma is one of Jack White’s favorite tour stops. At no time did Jack White or White’s management say that we would never play there again, that is untrue.

The incidents with the OU Daily student newspaper reporting the financial terms of the show, the private tour rider information, along with unsolicited photographers from their staff were unfortunate, unprofessional, and very unwelcoming. The show was one of many on this tour directed at playing for university students in their own environment. And the band were all completely thrilled with the performance and the crowd.

Incidentally, the most important function of a rider is that it lays out optimal technical specifications to ensure the audience has the best experience possible. For that, Jack hires a team of very qualified touring professionals who write the rider and attempt to execute a professional and pleasant experience for all involved. Part of that is making sure that the tour personnel of about 30 people plus the local venue staff are fed. Contrary to what some believe, Jack doesn’t write the rider nor make demands about his favorite snacks that must be in his dressing room. We’re not even sure he likes guacamole but we do know that the folks who work hard to put on the show do enjoy it.

(By the way, now that’s it out there, we recommend you try Lalo’s guacamole recipe. It’s delicious.)

We hope those present for Mr. White’s performance are able to maintain their good memories from the experience and he looks forward to seeing them again soon.