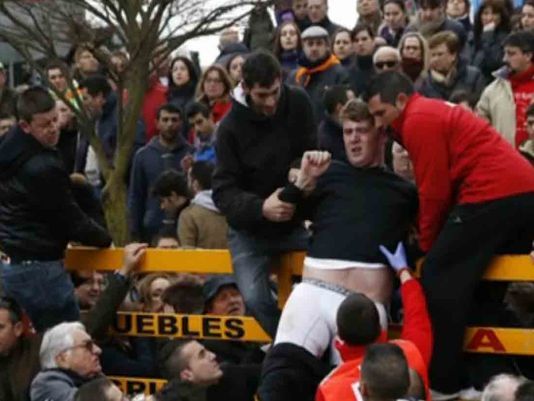 The Running of the Bulls is one of the most famous sporting events in the world. However, 20-year old Benjamin Miller found out this weekend it’s also one of the most dangerous.

Miller sustained life-threatening injuries after being gored at a bullfighting festival in Ciudad Rodrigo, Spain. He had to be taken to a nearby hospital where he was operated on for nearly three hours.

“I don’t rule out another operation to control the hemorrhage,” Dr. Enrique Crespo told CBS News. “We expected it, but maybe the bleeding is bigger than I had imagined.”

Images of the attack began to filter through social media over the weekend. But video of the goring wasn’t made available until Monday.

The video shows Miller getting trampled by the bull at first. The massive bull then pinned Miller against a railing. He was savagely gored and tossed in the air as astonished spectators watched.

According to NBC News, Miller is a Spanish and economics major at the University of Mississippi. He is studying in Salamanca, Spain.