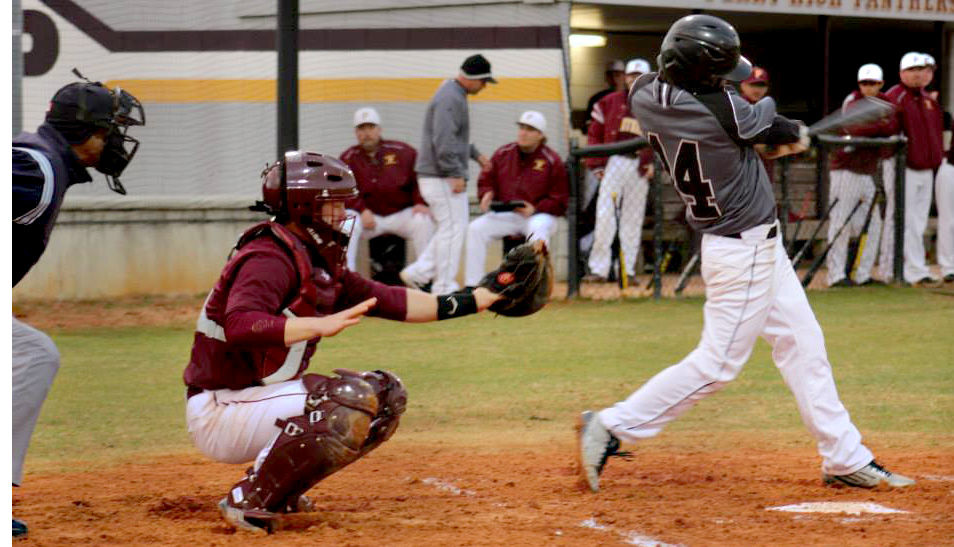 PERRY – The Schley County Wildcats kicked off their baseball season on Feb. 17, in Perry. The season opener resulted in a 7-4 non-region victory over the Perry Panthers, a class AAAA team.

The Wildcats started strong from the onset. Josh Hutchens led off with a double to start the first inning. Michael Leeder followed with double that sent Hutchens running for the plate, but Hutchens slipped on wet grass rounding third and was tagged out at the plate. Brett Usry then doubled to bring Leeder home, giving Schley 1-0 lead. The Wildcats hit two more loud outs, but failed to score again. Neither team put any more points on the board until the fifth inning.

When the Wildcats took the plate at the top of the fifth, Reid Ragsdale, Hutchens, and Leeder drew walks to start the inning.

With one out, Clint Sellars hit a hard grounder to the shortstop and the Panthers attempted to go for a double play. Leeder managed to break up the double play, and the Perry first-baseman missed the catch, allowing Ragsdale to come home and give the ‘Cats a 2-0 advantage. Hutchens moved to third base on this play and then ran on a passed ball at the plate. The ball didn’t get very far past the catcher, but Hutchens made a leap for the plate and beat the tag to bring the score to 3-0.

Chase Patrick then drew a walk and Knox Theus dinged a single to the right, driving in Sellars to put the Wildcats up by four before turning the plate over to the Panthers.

The Panthers finally made the board in the bottom of the fifth when Perry outfielder Parker Stahlman nailed a grounder to bring in catcher JW Gentry.

The Wildcats took the plate at the top of the seventh, ready to add even more points to their already impressive lead. Leeder singled to the left to start the inning and the next batter was put out. Sellars then hit a seed up the middle that got past the shortstop. Leeder and Sellars took advantage of the error, advancing to second and third, respectively. Patrick then hit a hard grounder between the shortstop and third base. Leeder beat the throw to the plate and Patrick reached on a fielders choice to get an RBI. Patrick then stole second and Blake Howell lined a two-RBI single into right-center to put Schley up 7-1.

The Panthers added three more points in the bottom of the inning, but could not overcome Schley’s strong lead and the Wildcats brought home a 7-4 win in their first contest of the season.

About the win, Wildcat head coach Chuck Cheek stated “That was a good win for us. Perry is a good baseball team–the kind we could end up seeing down the road in the playoffs. I thought our pitchers did a great job on the mound – they gave us a chance to win against a solid offensive team. Starting the game with three doubles set the tone. A fluke mishap at third cost us a run, but it got us in the mind set of driving the baseball.

Our pitchers threw well and were in control most of the game, even with a really tight zone for early in the season. We had big hits up and down the line-up, especially from Blake [Howell] and Knox [Theus]. Their RBIs helped expand the lead and give us a little room to work.”

Cheek continued “Brett [Usry] and Blake [Howell] were very solid on the mound and both were able to get the strike outs they needed when they got into a little trouble. Chase [Patrick] didn’t pitch poorly at all–was just missing. Leeder came in and shut the door. He entered in a tough situation and put the fire out quickly with two strike-outs. [I am] very proud of the guys tonight. A good first win to get the season started.”

The Wildcats return to action on Feb. 20, facing First Presbyterian Day in Macon.