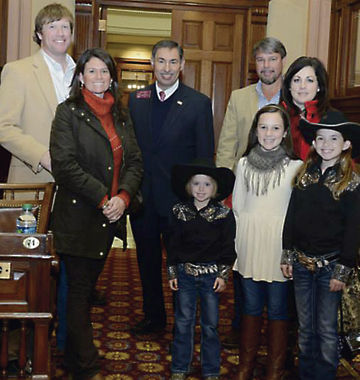 ATLANTA — Monday, February 2nd, marked the 9th Legislative Day for the Georgia General Assembly. Few bills were voted on this week in the House of Representatives as the majority of the time was spent reviewing bills before the various committees. Virtually all legislation is vetted in committee before being brought before the full House. The House Appropriation subcommittees continue their extensive review of the Governor’s 2015 budget proposals. The subcommittees will eventually pass portions of the suggested budget out of the House respective committees. Most of the key budget issues fall within the general areas of transportation, education, agriculture, healthcare, and public safety. The good news is that Georgia’s economy continues to show improvement as more and more companies move into the state. The available spending increase for fiscal year 2015 is approximately $276 million and an anticipated increase of $670 million is predicted for fiscal year 2016.

Transportation is one of the most important issues currently facing our State. In our district alone, District 138, 42 bridges have been determined to be structurally deficient: seven bridges in Chattahoochee County, 20 in Marion County, one in Schley County and 14 in Sumter County. Some of these bridges were constructed in the early to mid-1900s. The oldest bridge is on South Lee Street in Americus and it was first constructed in 1911. Rep. Jay Roberts, of Ocilla, District 155, who serves as chairman of the House Transportation Committee, is sponsoring major legislation to help correct these and other serious transportation problems. The cost associated with updating our roads and bridges throughout the State is an estimated $1 billion in additional State revenue. How to fund these projects is a tremendous challenge which the legislature must face.

Education continues to be a huge priority for the Georgia General Assembly. Governor Deal recommended in his proposed State budget that much of the increase in revenue funds be redirected to various education programs including $8.3 million to local school systems, $35 million for increasing broadband Internet access in classrooms, and in the 2016 budget, a half-billion in new funding for the Department of Education and local school systems. The budget proposal also includes funding for pre-k teachers for two planning days, an increase in awards for HOPE scholarships and grants, and an additional $6 million in low-interest loans for higher education. Most of these proposals and many others are currently being reviewed by House Appropriation subcommittees.

Governor Deal’s 2016 budget proposal recommends significant changes to the Georgia Soil & Water Conservation Commission (GSWCC). Under the proposal, GSWCC will no longer be a standalone agency but instead will become a part of the Georgia Department of Agriculture. Many members of the farming community have voiced concerns about this change. The House intends to closely review the proposal to ensure that changes, if any, result in a continuation of the same or an improved level of service for farmers. I and other House members share their concern for the rights and interests of farmers as well as those of all property owners.

My 9th Legislative Day included a Health and Human Services Committee meeting in which we heard reports on HB47. This bill allows a pharmacist, without authorization from the practitioner, to refill prescriptions for topical ophthalmic (eye care) products at 70 percent of the predicted days of use. The bill is intended to prevent unintended interruptions in drug therapy for topical ophthalmic products.

The next day, Tuesday, Feb. 3, was a busy day at the Capitol. On this 10th Legislative Day, two pieces of local legislation which I had prepared and sponsored were placed on the local calendar with other local legislation. The local bills passed the House by a vote of 146-9. HB101 provided for a change in the description of the education districts in Schley County and was brought at the request of the Schley County Board of Education. HB102 provided that the judge of the Probate Court of Schley County shall also serve as the judge of the Magistrate Court of Schley County. I sponsored HB102 at the request of the Schley County Commissioners.

Also on Tuesday, Executive Director, Norman Graves and CFO, Donna Kelly from the Middle Flint Area Council on Aging were in Atlanta for the quarterly meeting and training of the Georgia Association of County Care Providers. Norm and Donna are doing a great job meeting the needs of our seniors. Joining them was Lori Ann Weldon, account executive of Golden Gourmet. Golden Gourmet produces frozen and shelf-stable meals for distribution nationwide. Their welcomed new facility in Americus is currently under construction.

Feb. 3 was also Georgia State Firefighters Association & Georgia Association of Fire Chiefs Day at the Capitol. The Capitol was full of these unsung heroes many of whom are simply volunteers who bravely answer the call to serve their communities. Visiting from Americus were Fire Chief Allen Erkhart and firefighters Todd Shuffleberger and Lewis Hughes.

It was indeed a pleasure for me to recognize all the CASA staff and volunteers who came to the Capital on Feb. 3. CASA stands for Court Appointed Special Advocates. This organization was established to develop and support affiliate programs that provide volunteer advocacy for abused and neglected children involved in juvenile court dependency proceedings. Last year alone 2,224 CASA volunteers advocated for 8,958 children, 7,712 of whom were in our State’s legal custody. Executive Director Brad Ray from Americus was recognized for his outstanding contributions to the program while seated in the gallery. Also from Americus was Nicole Lee, the founder of Phenomenal Women Meet Up. This caring organization addresses the heartbreaking issue of family violence.

Last but certainly not least, Feb. 3 was also Youth Equine Championship Day at the Capital. HR122, sponsored by Rep. Tom McCall, District 33, honored these young champions for their achievements in equestrian competitions. Mr. and Mrs. William Bailey brought their daughter Julia Caroline to be recognized at the awards ceremony. Accompanying the Baileys were Mr. and Mrs. Russell Weaver. They brought their daughter Morgan to be recognized at the award ceremony. Before the ceremony we had an opportunity to visit the House chamber and take some photographs. The ceremony was held across the street from the Capitol at the Old Georgia Railroad Depot where we all feasted on Varsity chili dogs (almost as good as Monroe’s).

Feb. 4 was Legislative Day 11. I attended the Rural Caucus meeting immediately following adjournment. The caucus meeting was held at the State Agriculture Department Building across the street from the Capitol. The CEO of HomeTown Health, LLC, Jimmy Lewis, discussed the plight of rural hospitals in South Georgia and emphasized how, under the federal Affordable Care Act, rural hospitals were suffering. The federal Affordable Care Act has directly hurt hospitals by lowering reimbursement rates for indigent services. While at the same time, the Act has increased overall medical costs by drastically raising the number of medical services our hospitals are required to provide. The fact that rural health care is in critical need is not only recognized by the Rural Caucus but also by Governor Deal. In the 2014 Legislative Session, Governor Deal named a Rural Hospital Stabilization Committee which has done extensive research this past year. Hopefully, in the near future the findings of the RHSC will be reported to the Legislature in the form of serious recommendations.

That afternoon I met with nna Ballard, a dedicated and hardworking advocate for Ava’s Law – a proposed law that would require health plans to cover autism. Named after Anna’s daughter, Ava, Ballard is a passionate and forceful champion for the families that live with autism.

On Wednesday evening I also attended programs by two different organizations. First, I attended a presentation by the University of Georgia College of Agricultural & Environmental Sciences. Representatives from UGA presented their budgetary needs and urged consideration of funding for positions that would assist agriculture. Next, I attended a program by the Georgia State Retirees Association. The GSRA presented a detailed analysis of the funds administered by the Employee Retirement System. The presentation by the ERS showed that FY 2014 had a net favorable position with a 37.9 percent increase in net investment income, 21.7 percent increase in employer/non-employer contributions, and only a .5 percent increase in benefit payments. Feb. 5 was filled with legislative and constituent business. SeKeithia Lewis, Nutrition manager for Staley Middle School in Americus, came to the Capitol to show her support for the legislative agenda of the Georgia School Nutrition Association. She left me a position paper that outlined the nutritional needs of our school-age children.

Thursday, I also visited with Brittany McCumber and Kenneth Christmas from the Perry Wellness Center in Americus who had come to the Capital for addiction recovery day. While here, we chatted with Rep. Katie Dempsey, District 13, and Georgia Department of Behavioral Health and Developmental Disabilities Commissioner Frank Barry. Dempsey recently authored HB198 which will require annual suicide prevention education training for certified school system personnel. As Brittany and Kenneth looked on, I cosponsored HB198 in the House Clerk’s Office in the Capitol. It is truly an honor to be a part of this important piece of legislation that will save lives and provide hope for so many youths that suffer from depression and go unrecognized and untreated.