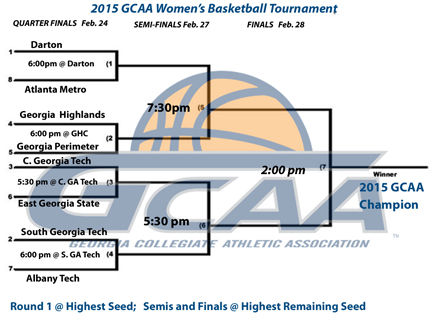 AMERICUS – The South Georgia Technical College Lady Jets will be hosting the Albany Technical College Lady Titans in the first round of National Junior College Athletic Association Division I Region 17 tournament on Tuesday, February 24th in the Hangar on the Americus campus. Game time is 6 p.m. Admission is $5. Students, faculty & staff, and Jets Booster Club members will be allowed in free.

The Lady Jets finished second in the Georgia Collegiate Athletic Association regular season competition and earned the right to host a first round tournament game. The Lady Jets will host the seventh ranked Albany Tech Lady Titans. The Lady Jets are 14–3 in the GCAA and Albany Tech is currently 6–11.

In the other first round NJCAA Division I Region XVII tournament games, the top-ranked Darton Lady Cavaliers, who are 16–2, will host eighth place Atlanta Metro which has a 4–13 conference record on Tuesday, February 24th at 6 p.m. in Albany and the third place Central Georgia Tech team will host sixth place East Georgia State at 5:30 p.m. in Macon. In the other first round competition, the fourth seeded Georgia Highlands team will host fifth place Georgia Perimeter at 6 p.m. in Rome.

The semi-final and final rounds of the tournament will be hosted at the highest remaining seed. As the GCAA Division I regular season champions, Darton is expected to win the opening round game and host the remaining two rounds.