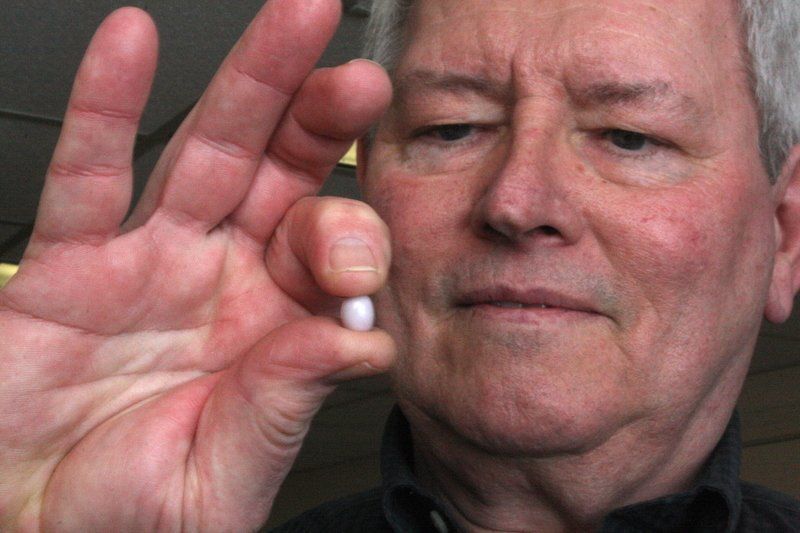 BEVERLY, Mass. — It has the appearance of a pink jellybean, a value of up to $15,000 and the world’s attention as it hits the auction block next month.

For the family of Mike Serino, a Swampscott, Massachusetts police officer, it could also mean a kitchen makeover, after he found a rare quahog pearl in a meal six years ago.

“I found it in my seafood stew at a Portuguese restaurant,” Serino said. “I got it in my mouth while I was eating the stew. I spit it out in my hand. My wife said, ‘What is it? A rock?’ I cleaned the sauce off of it and thought it was pearl.”

While Serino was correct, he didn’t think much of it. Thinking the gem was “pretty,” the family stashed it in a jewelry box and moved on.

That is, until last year, when the story of a Virginia Beach woman finding a valuable pearl in her food led Serino to do some research. He sent the pearl off to the Gemological Institute of America to be analyzed and authenticated.

That’s when the rarity of the find became more apparent.

The pearl was made by a quahog clam, a hard clam native to beaches along the eastern United States, according to the National Oceanic and Atmospheric Administration.

“I tried calling a lot of places around the country, and people don’t know how to put a value on this type of pearl,” Serino said. “I went to several area viewers, and they’ve never seen anything like it.”

That’s because a quahog pearl is incredibly, incredibly rare.

Harry Morgan, director of appraisal services at Kaminski Auctions in Beverly, said he’s never seen one before — even after 35 years in the business.

“I’ve lived in this area my entire life and have seen many quahogs,” Morgan said. “I didn’t know quahogs produced pearls.”

That’s because very few quahogs do. The occurrence of a gem-quality quahog pearl is estimated to be one in 2 million, according to a press release from the auctioneer.

“Only one in, I think, 100,000 or 200,000 quahogs produce a pearl at all, and most of those are destroyed,” Morgan said. “Mechanical separation is what separates the meat from the shell. When they do that, it destroys the pearl that’s in there. It just crushes it.”

Whether it will actually sell at that amount, go for less or reach more competitive bidding remains to be seen.

“People collect pearls,” he said. “The more people look at it, the more there’s a chance that someone is going to fall in love with it.”

Serino said he’s anxious about the sale, but he’s staying grounded for the time being.

The auction will begin on Sunday, March 15, at 10 a.m. To watch or participate online, visit Kaminski’s website at kaminskiauctions.com.