Six shades of emojis: Texting to get more diverse 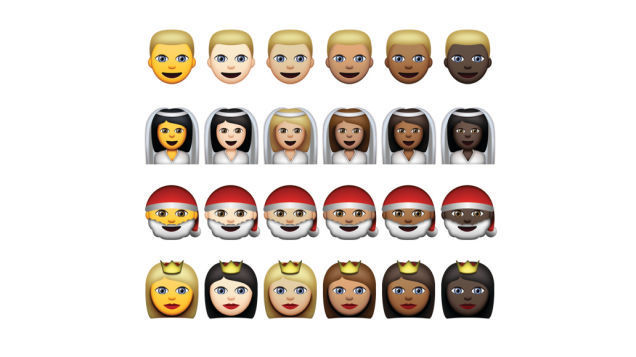 For those who like a little variety in their text-message Santa Claus, or would like to see darker skin on their princesses, your requests have been heard.

Apple and Unicode Consortium teamed up to make the popular emoji symbols more racially diverse. Unicode is an industry standards group that determines which emoji will be available to smartphone users.

No more will iPhone users only have to send out a pale thumbs up when indicating everything is good or they are fine with fish tacos for lunch. With the new set of emojis, which were announced Monday, phone handlers can choose between a variety of skin tones.

For those who don’t want to have to scroll through an endless supply of different skin toned emojis, iPhone users can now click and hold a picture and then scroll right to change its ethnicity.

It’s not just skin color that got an update.The icons symbolizingfamilies received a contemporary update. The familycannow show kids with gay and lesbian parents.

According to Fortune Magazine, the new emoji should be included in the public release of the next versions of iOS and OS X. And naturally, Twitter had a range of reactions to the news:

Yay very glad Apple is introducing more diverse emojis. (But we’re closer than ever before to using absolutely no words to communicate ever)

These emojis are just the white one in diff colours, this is lazy and sloppy

Why Joan Rivers didn’t make the Oscars’ ‘In Memoriam’…