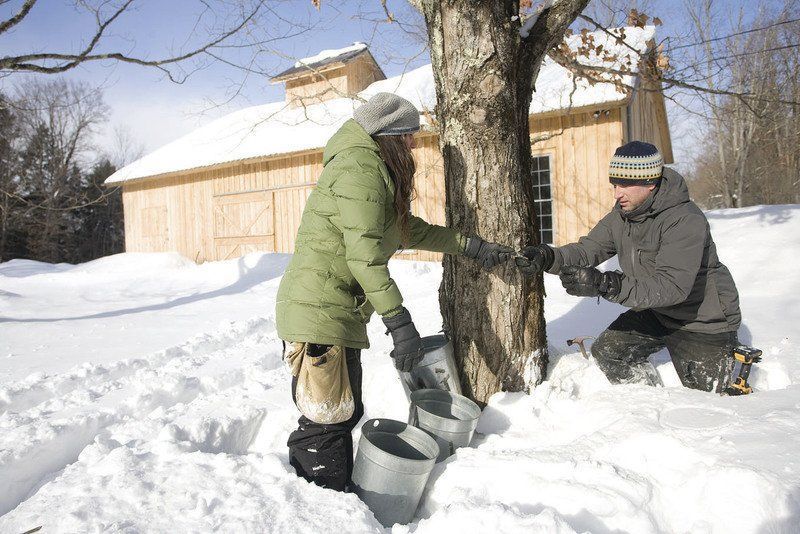 The colder-than-normal temperatures and significant snowfall in the Northeast have hit the region’s maple sugar producers hard, pushing back the start of the production process and perhaps leading to a temporary spike in prices.

In New York, a mean February temperature of 10.7 degrees thus far means the sap inside the maple trees is still frozen solid, according to Brian Rather, owner of Mill Hollow Maple in New Lisbon.

“The weather has not been conducive,” Ryther said. “Right now we’re just sitting back and waiting.”

Reed Baker, owner of Baker’s Maple in Bainbridge, said he “hasn’t even thought about” drilling or tapping his trees yet because of the cold weather.

Ryther told The Daily Star he typically begins collecting sap during the second week of January and has several batches of syrup made in time for Valentine’s Day. But not this year.

“Right now the trees are just frozen solid,” Ryther said. “We’re a little nervous. We’re going to need between four days and a week of above-freezing weather to thaw the trees out. We’re relying on Mother Nature.”

In New York, maple syrup production is a multi-million-dollar industry depending on specific weather conditions for optimal yields. According to Dwayne Hill, owner of Shaver Hill Farm in Harpersfield, about 70 miles west of Albany, the state’s maple syrup farms produce more than 350,000 gallons of syrup a year and contribute more than $25 million annually to the state’s economy.

“This much snow makes it difficult to even get around to drill into the trees, which is what we’re trying to do now,” Ryther said. “Even with snowshoes on, it’s a very arduous task.”

In an average year, Ryther taps about 4,000 trees and makes about 1,800 gallons of maple syrup by the end of the season in April, he said.

The production process is “a lot of work,” according to Hill. The water in the sap must be boiled away, and since most sap consists of 2 percent sugar and 98 percent water, about 40 gallons of raw sap is required to make one gallon of maple syrup.

“A lot of people think you drill a hole into the tree and maple syrup flows out,” Hill said.

All three men are optimistic that the weather will break soon and allow for a successful tapping season.

“Hopefully March will be warm enough,” Baker said. “Another week or two and spring will eventually be thinking about getting here, I hope.”

Hill added that it’s important to remember that every year is different.

“Sometimes we make syrup in February, sometimes we don’t,” Hill said. “Last year, most people didn’t make syrup until March because of the cold. It will be late again this year, but if we get the right temperatures toward the end of March, we can make a pile of syrup and have a good crop.”

The Oneonta (N.Y.) Daily Star contributed to this story.