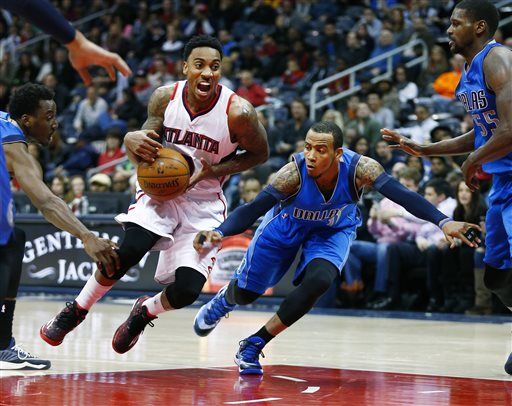 Led by Schroder’s 17 points, the Hawks took the lead with a 13-0 run in the third quarter and went on to a 104-87 victory on Feb. 25 over the Mavericks, who were without suspended guard Rajon Rondo.

Schroder, the second-year player from Germany, made three of five 3-pointers. He also led Atlanta with a career-high 22 points in a 105-102 win at Dallas on Dec. 22.

“People are going to start learning he can shoot the ball and do a lot of things,” Atlanta’s Al Horford said.

The Mavericks suspended Rondo before the game for conduct detrimental to the team. Rondo had a heated exchange on the court with coach Rick Carlisle in the third quarter of Tuesday night’s win over Toronto.

Carlisle said the one-game suspension was an “organizational decision” and said Rondo will start in the Mavericks’ next game against Brooklyn on Saturday.

“I thought Dennis early, middle and late was a big factor,” Hawks coach Mike Budenholzer said. “He hit shots. He guarded. I thought he did a lot of things well. We needed him tonight.”

Rondo’s suspension left the Mavericks with only 11 players. Center Tyson Chandler (hip contusion) and forward Chandler Parsons (left ankle) were held out with injuries. Forward Amare Stoudemire was rested with the team playing on back-to-back days.

“It’s tough,” Carlisle said. “We’ve been in these positions before all year. We just have to look to the next guy to step up. We had opportunities to keep the lead. … It just wasn’t our night.”

The Mavericks appeared to wear down. They set a season low with 34 second-half points.

Dirk Nowitzki had only four points while playing his fifth game in seven days.

“I felt fine, I felt good,” Nowitzki said. “It was worth a shot. I think in order for us to steal this one we were going to have to shoot better from the outside, especially in the second half.”

The Mavericks made only five of 31 3-pointers.

Dallas led by 14 points, the last time at 39-25, in the second quarter. The Hawks took the lead with their 13-0 run in the third, including seven points from Paul Millsap.

The Hawks stretched the lead by scoring the first 12 points of the final period.

Mavericks: Jose Barea started for Rondo and scored 13 points with seven assists. … Carlisle said he didn’t know if Stoudemire will need rest in future back-to-back games. Carlisle said he hopes Chandler returns against Brooklyn on Saturday. … Parsons was not with the team…. Dallas fell to 13-1 on the road against Eastern Conference teams.

Hawks: The Hawks outscored Dallas 47-34 in the second half. … Guard Jeff Teague started and scored 11 points after missing Tuesday’s practice with an illness. … Kyle Korver had 16 points and Millsap had 15.

DON’T LISTEN TO HIM

There was some confusion about the status of the game as rumors circulated Wednesday afternoon that a winter storm in north Georgia would force a postponement. Hawks guard DeMarre Carroll said he left the arena and was in a grocery store when he saw a message on his phone the game would be played.

Georgia Gov. Nathan Deal declared a state of emergency ahead of the storm. Deal and Atlanta mayor Kasim Reed urged drivers to stay off the roads after 4 p.m.

Despite the stern warnings, attendance was 16,126. Hawks chief executive officer Steve Koonin grabbed a microphone after the game and praised fans for braving the conditions.

“The next time the governor tells you to stay home, come to a Hawks game!” Koonin said.

Rain caused a leak in the Philips Arena roof that delayed the game about 5 minutes in the first quarter. Game clock malfunctions caused three more short delays in the opening period. There were no more delays.