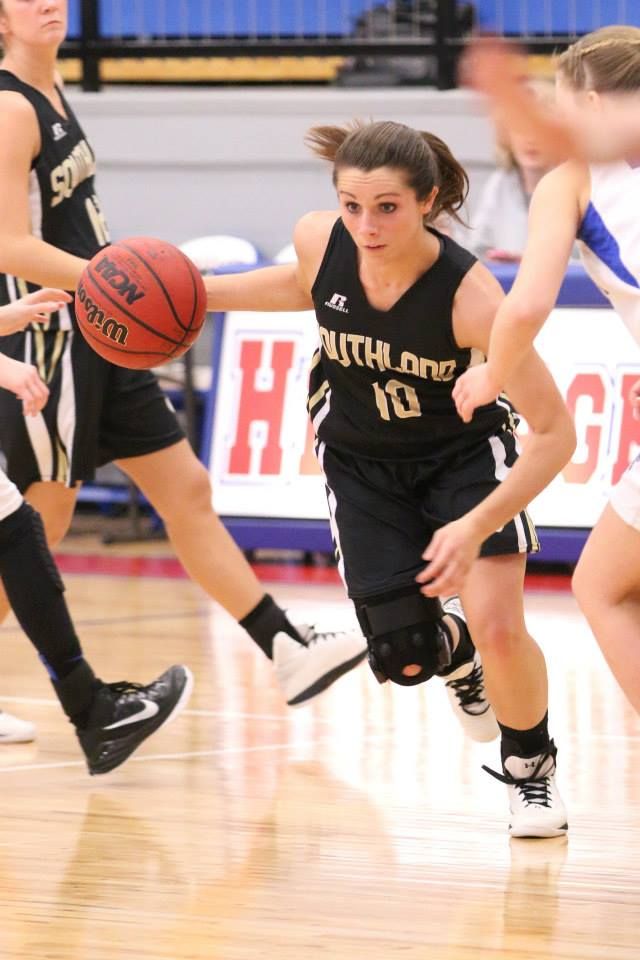 DUBLIN – The Southland Lady Raiders basketball teams wrapped up the GISA region 3AAA tournament on the weekend of Feb. 20-21. The Lady Raiders finished third in the region before moving onto the AAA state tournament.

After a strong performance in the region tourney that head coach Paula McDonald called “Some of the best playing that I’ve seen from the girls this season”, the Lady Raiders traveled to Newnan on Feb. 24 to compete in the sweet sixteen round of the state tournament.

The Lady Raiders began their region tournament play with a 51-40 in-game win over the Valwood Lady Valiants on Feb. 16. Southland’s girls then suffered a heartbreaking 21-40 defeat in their second-round match against the Westwood Lady Wildcats. The Westwood girls then went on to take first place in the region. The Lady Raiders returned to the court on Feb. 21 to earn a third-place region 3AAA finish with a 39-35 win against the Deerfield-Windsor Lady Knights.

Following their impressive region finish, the Lady Raiders began to ramp up their practice in order to prepare for the state tournament. After all of their hard work, they felt ready to head to Newnan and face the Trinity Christian School Lady Crusaders. Prior to the contest, McDonald told the Times Recorder that she felt confident that Southland’s girls were ready to deliver their best performance possible in the upcoming match.

The Lady Raiders took a while to warm up in the game, putting only a handful of buckets on the board in the first half. On the Lady Raiders’ slow start, McDonald stated “We thought we had a good game plan, but perhaps the new scenery and new opponent had us frozen for most of the first half. We managed only 12 points by half-time. We took great shots, but many rimmed out. We probably played it a little too safe too.”

The Lady Raiders adjusted their strategy in the second half, finding their groove and began to make up some ground.

McDonald continued “Our half-time adjustments paid off and we were able to get things going in a better direction behind senior point guard Ella Hawkins, who quickly found her mark when she exploded for 12 points during the third quarter. Our full court man defense made some things happen in our favor and we felt a new life. Still, Trinity Christian’s 6’4″ senior (and Furman Signee), Sydney Bozeman was not going to let the Lady Raiders off without a fight.”

The Lady Raiders began narrow the gap, pulling to within nine points before The Lady Crusaders’ shooters began to heat up again. On the final frame of the game, McDonald told the Times Recorder “We began to struggle again with a few rushed shots that just missed the mark and our nine-point deficit quickly became more stretched out in a very intense transition game. Southland fought long and hard until the final buzzer revealed a 15-point defeat.” Trinity Christian took a 38-53 victory at the game’s end.

On the defeat, McDonald said “We felt like the kids played their hearts out for the team tonight, but we just came up a little short. I firmly believe that we could play with them on any given day. We hope they all enjoyed this opportunity and get hungry for another shot next year.”

Asked about the team’s prospects next year, McDonald told the Times Recorder that, though four of the Lady Raiders will be graduating in the spring, she has several younger players who have shown a great deal of skill and determination throughout the season and will be ready to take the reigns and lead the team into the future. She went on to say how sophomore starter Madison McPherson has shown a lot of promise this season as has freshman Kathleen Kinslow. Chris Shattles, a junior who has been out most of this season due to an injury, is also slated to return with the Lady Raiders in the 2015-16 season.

She further stated “This team’s biggest strength is the willingness of the girls to work hard. The senior players have done a great job of being role models for the younger players and showing them how to lead the team.”