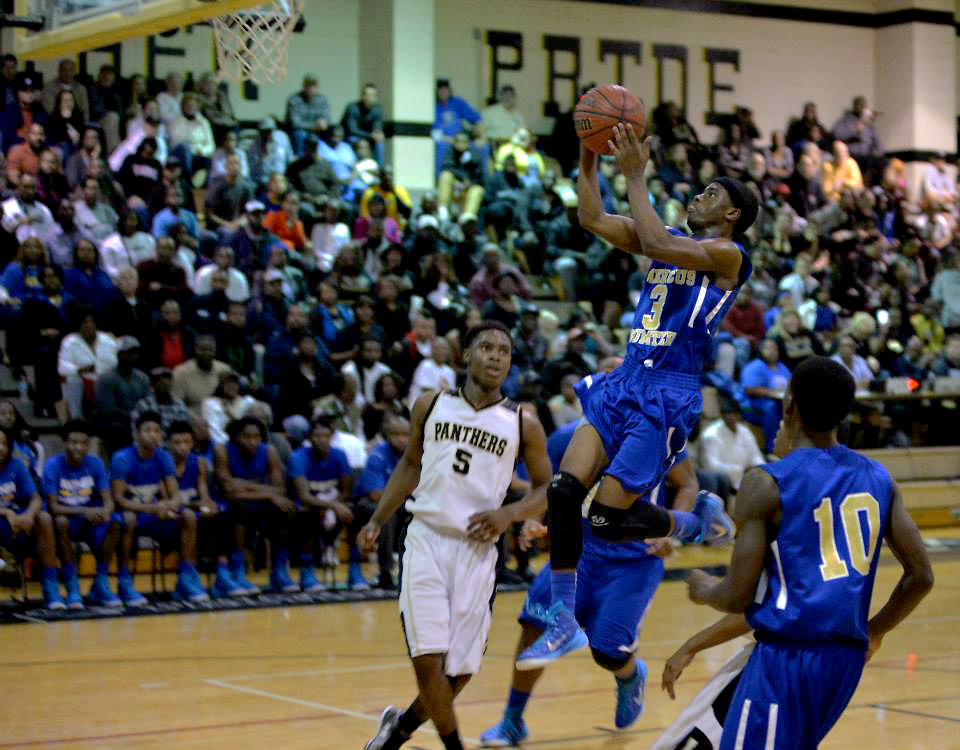 HINESVILLE – Following a smashing defeat of the Cartersville Hurricanes in the sweet sixteen round of the GHSA AAAA state playoffs on Feb. 21, the Americus-Sumter Panthers traveled to Hinesville for the elite eight round of the tournament on Feb. 25. Facing the Liberty County Panthers, Americus-Sumter suffered a 52-58 defeat in the third-round match, dashing the team’s hopes of progressing to the final four.

The defeat wraps up the Americus-Sumter season with a 26-6 record. Liberty County left the court with a 24-4 record.

Heading into the match, Panther head coach Michael Hoffpauir and the Americus-Sumter boys prepared rigorously for the ever-increasing difficulty of the competition. Hoffpauir told the Times Recorder that he and his coaching staff prepared by breaking down film footage of their opponents to determine what strengths and weaknesses they could take advantage of in the contests. He also had the Panthers rigorously practicing shooting stating “Keeping up shooting percentages is very important, especially at this point in the playoffs.”

Americus-Sumter did not disappoint, hitting the court with the ferocity that the team’s fans have come to expect throughout the season. Liberty County hit the boards with the same eagerness to move up the ranks and the action of the “Battle of the Panthers” kept the teams’ fans on their toes from the tip-off.

During the break, the Americus-Sumter boys got a few minutes of well-earned rest while Hoffpauir and his coaching staff got the team pumped up in anticipation of the next sixteen minutes. Americus-Sumter returned to the court re-energized and put all that they had into the third frame. Their efforts paid off as they outscored Liberty County 17-12 in the third quarter to turn a three-point deficit into a two-point lead. The teams entered the final stanza with Americus-Sumter ahead 38-36.

The real action began in the final eight minutes, however, as Liberty County came from behind to tie the score 40-40 one minute in. Another minute later, the Liberty County squad pulled ahead by one point to take a lead that they would hold onto for the remainder of the game. Despite a strong defensive effort from Americus-Sumter, Liberty went on a 9-3 run over the next five minutes to widen the gap to 53-47 with less than a minute left.

Americus-Sumter scrambled to overcome the deficit before the buzzer, but Liberty’s shooters would not relent. The Liberty County Panthers took the 58-52 victory at the game’s conclusion, solidifying their spot in the final four and bringing Americus-Sumter’s impressive season to a close.

Juwan High led the charge for Americus-Sumter in the contest, posting a whopping 25 points while contributing four assists. High also sank three of six attempts from beyond the arc in the match. DJ Harris added eight points to the Panthers’ final score, contributing four rebounds. Adam King led the team in rebounding, pulling down eight. Harris, Daylon Leary, Eric Hall, and Time Wilson each gained one steal in the game.

Hoffpauir spoke with the Times Recorder prior to the match to discuss the team’s future, stating “We’ve grown a lot as a team this season. I see individual players improving a lot and it has produced some great results for us.”

He continued “The Panthers have flourished under the leadership of seniors Juwan High, DJ Harris, and Eric Davis among others.” Hoffpauir likens the team leaders to an extension of the coach’s hand on and off the court. Hoffpauir told the Times Recorder that these three players have been role models for their younger teammates both athletically and academically.

Hoffpauir went on to tell the Times Recorder that, though several of the team’s seniors will be graduating this year, he feels confident that the Panthers’ underclassmen will be ready to take the reins and lead the team to another winning season next year. With strong players like Mekall Yancie, Adam King, Kiante Sims, Daylon Leary, Eric Hall, and several others set to return next year, he feels sure that the future of Panther basketball looks bright. In addition to that, Coach Hoffpauir says that there are several players on the junior varsity team who currently give the varsity players a run for their money on the court. With so many talented players prepared to carry the Americus-Sumter torch into the future, fans can rest assured that the Panthers will continue to be a force to be reckoned with on the court for years to come.