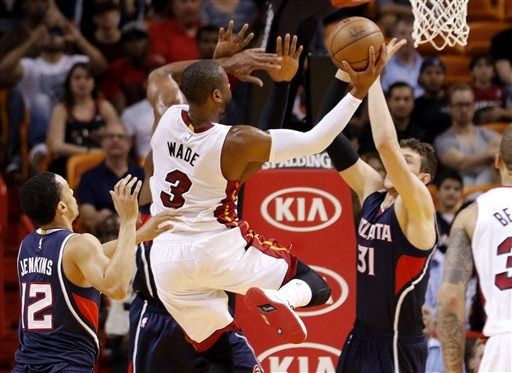 MIAMI (AP) — Even without four players, the Atlanta Hawks had more than enough.

Kent Bazemore scored 15, including a big 3-pointer with about a minute left that gave the Hawks an 89-80 lead. John Jenkins scored 12 for Atlanta, which turned 23 Miami turnovers into 31 points.

“We got a huge lift from guys who haven’t been playing much,” Atlanta’s Kyle Korver said. “And they really gave us the boost that we needed.”

Dwyane Wade scored 22 points for Miami, which fell to 10-17 at home and still remains in the No. 7 spot in the Eastern Conference race. Hassan Whiteside finished with 14 points and tied a season high with 24 rebounds for Miami, which also got 16 points from Mario Chalmers and 10 from Henry Walker.

“We’re fighters,” Wade said. “We still don’t all know each other, but we’re out there fighting for this thing.”

It was the second straight night Miami lost by exactly two points, after falling in New Orleans 104-102 on Friday.

The Hawks rested four regulars — Al Horford didn’t even make the trip because his wife just had a baby, while Pero Antic, DeMarre Carroll and Jeff Teague were all given the night off.

“Just working our way through the season,” Hawks coach Mike Budenholzer said, “and trying to keep us in a good place health-wise.”

Such are the luxuries afforded to teams who now have a 10-game lead in the East standings.

And even though the rotations were different, the Hawks still looked to have a defense that was airtight. Miami missed 15 consecutive shots during one 10-minute stretch of the first half — with four turnovers in there as well — and Atlanta looked like it could do no wrong.

By halftime, the Hawks led 43-33, the Heat having more turnovers (14) than baskets (12). Atlanta then came out and scored the first eight of the third quarter, stretching the lead to 18 and looking completely poised for a runaway.

The Heat had other ideas.

Slowly chipping away, Miami went on a 29-14 spurt over the next 11 minutes, getting within 65-62 when Goran Dragic made a pair of free throws with 9:58 left.

But they would never get the lead.

“We showed some grit, some toughness to keep on grinding through an ugly game,” Heat coach Erik Spoelstra said. “Guys really competed defensively.”

Hawks: Atlanta used its eighth starting lineup. … The Hawks are now 34-3 when holding opponents under 100 points. … It was Atlanta’s 20th road win of the season, one behind Golden State for the NBA lead. … Millsap’s corner 3-pointer with 3:40 left proved huge, putting the Hawks up 84-74 and silencing the crowd.

Heat: Miami announced before the game that All-Star forward Chris Bosh (blood clots on lung, out for season) has been released from a South Florida hospital. … Whiteside had 10 rebounds before the first quarter ended. … Walker made his first start in three years, giving Miami its 23rd different lineup this season. But he also shot 3 for 16, 2 for 11 from 3-point range. … Forward Chris Andersen (ill) didn’t play.

The Heat held a moment of silence before the game for Anthony Mason, whose death was announced Saturday.

Mason spent the 2000-01 season with the Heat and was an All-Star, averaging 16.1 points to help fill the void created by Alonzo Mourning’s absence because of kidney disease.

“He really stepped up and was a warrior,” Spoelstra said. “He was defined by competition and toughness.”

Heat President Pat Riley released a statement as well, saying “news like this is not only sad, but it’s tragic.” Riley brought Mason to Miami and also coached him when they were with the New York Knicks.

The Hawks won despite an uncharacteristically cold night from Korver, maybe the league’s best sharpshooter. Korver finished just 2 for 9 from the field, 2 for 7 from 3-point range. He’s now shooting exactly 50 percent from beyond the arc this season.