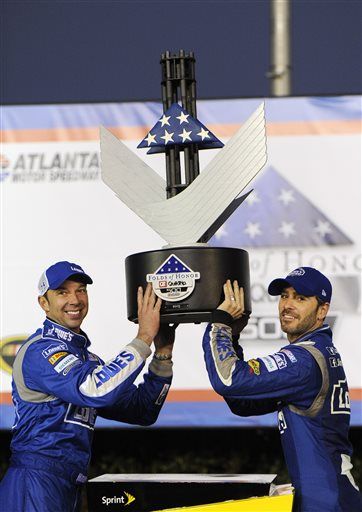 HAMPTON, Ga. (AP) — One by one, Jimmie Johnson picked off all the drivers ahead of him.

By the end, he was the guy everyone was chasing.

Good luck with that.

The six-time NASCAR Sprint Cup is already taking aim at No. 7.

With a performance that all but locked up his spot in the championship Chase, Johnson didn’t even wait for the calendar to flip to spring to show that he’ll be awfully tough to beat.

After starting near the back of the field because he didn’t get a chance to qualify, Johnson pulled away after the final restart with 13 laps remaining to win on March 1 at Atlanta Motor Speedway. He beat Kevin Harvick by nearly 2 seconds.

“When he’s on, really switched on, and the car’s in his comfort zone, it’s amazing what he can do with a race car,” said Chad Knaus, Johnson’s longtime crew chief.

Johnson is the only driver to make the Chase through each of its first 11 years, but he’s coming off an 11th-place finish in 2014 — the first time he’s ever placed lower than sixth over a full season.

Some wondered, at age 39, if that signaled the beginning of a decline.

“It takes the pressure off in some ways,” said Johnson, who didn’t pick up his first of his four victories a year ago until the 12th race.

He heads to Las Vegas next weekend knowing he remains the king of the mile-and-a-half tracks, like the one in Atlanta and the one he’ll be racing on in Sin City. In some ways, this was the start of the real season, competing under the rules and on the style of track that will make up most of the 36-race schedule.

“I definitely think it gives you a sign of who’s going to be competitive,” Johnson said. “I feel really good coming here and having this kind of showing. What we did here, we can take to a lot of the racetracks ahead.”

A week ago, Kyle Busch sustained serious injuries when his car crashed head-on into an exposed concrete wall during an Xfinity Series race at Daytona. Jeff Gordon was involved in another scary crash in Atlanta, slamming into a wall just beyond the cushion of the SAFER barrier.

Busch, missing his second straight Cup race while recovering at home from a broken foot and leg, sent out a tweet directed at NASCAR after watching Gordon’s crash on television.

“When will this end,” he wrote.

Gordon was not injured, but he appeared angry as he talked with a safety worker. Track officials had increased the amount of padding in Atlanta after Busch’s wreck, but there were still sections of unprotected walls, as there are at most tracks. Gordon’s crash will surely step up pressure on NASCAR to mandate protective padding on all concrete walls.

“Hopefully, soon, they’ll get that fixed,” he said.

Gordon was making his final appearance at Atlanta, the track where he began his Cup career at the end of the 1992 season. The four-time champion, who plans to retire at the end of the season, is off to a rough start in his farewell tour after winning the pole for the Daytona 500. He finished 33rd in the season opener, where he was also caught up in a wreck, and ended up 41st in Atlanta.

The start of the race was delayed nearly an hour to allow the track to dry after morning showers.

While the rain held off the rest of the way, the temperature was only 43 degrees when the green flag waved under low, thick clouds. Not surprisingly, the stands were not even half full, another blow for one of NASCAR’s most historic tracks, which hasn’t come close to selling out in recent years and even took down a large section of seats in the third turn before this race.

Atlanta once hosted two events a year, including the Cup finale, and even after losing its spring race still held a prime spot on the Labor Day weekend. But attendance woes led to the track’s only race being shifted to the second week of the season, while north Georgia is still in grips of winter.

The result was predictable: cold temperatures and poor crowds all weekend. In fact, the sparse turnout in the stands appeared smaller than crowds of more than 50,000 that attended a pair of Supercross events at the Georgia Dome.

All weekend, drivers praised the speedway as one of their favorite tracks.

It sounded more like lobbying to keep Atlanta on the schedule beyond 2015.