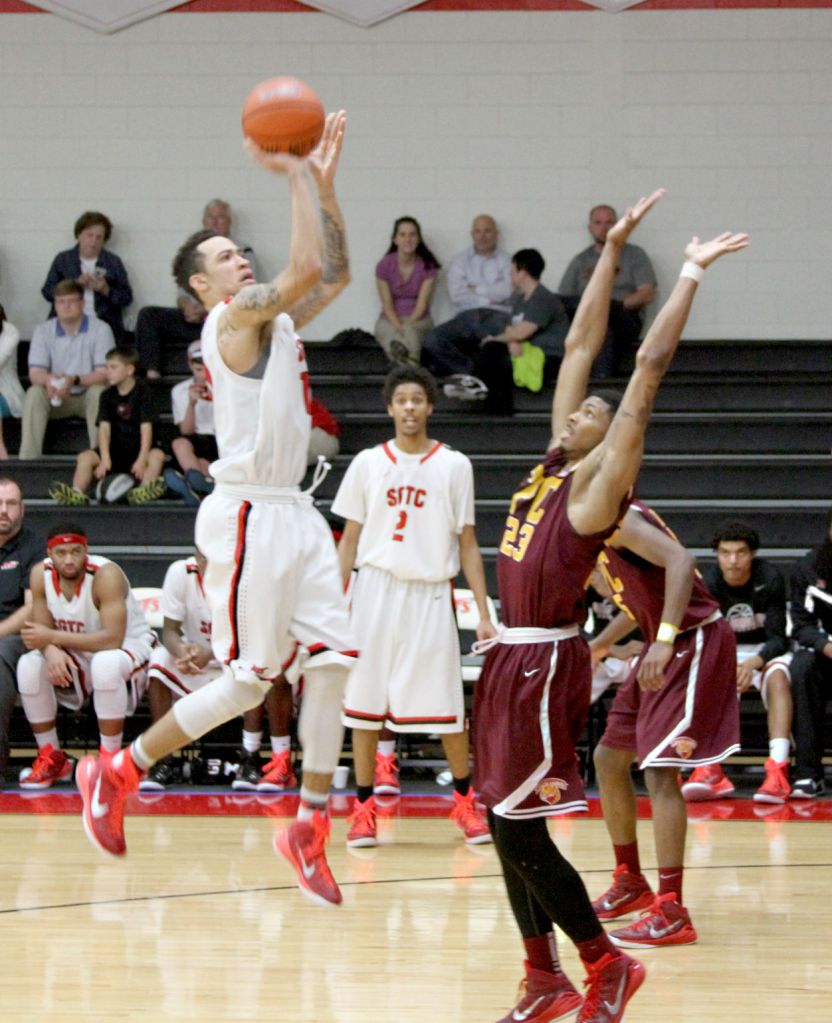 AMERICUS – The third-seeded South Georgia Technical College Jets defeated the sixth-ranked Georgia Perimeter College Jaguars 70–65 in the first round of the National Junior College Athletic Association Region XVII tournament in the Hangar in Americus on March 3.

“This was a big win for us,” said Jets head coach Douglas Byrd after his team defeated Alfred Barney and the Georgia Perimeter Jaguars in a hard-fought game. “Any time you can defeat Georgia Perimeter you have accomplished something, especially in a playoff situation,” said Byrd.

The Jets got off to a slow start in the contest. Georgia Perimeter opened the scoring with a three-pointer first. One minute later, SGTC’s Trey Mitchell answered with a trey to even the score. The Jaguars went on to post five more points before the Jets hit the board again. Tim Straughter broke the Jets’ silence with a perimeter bucket five minutes in. The South Georgia Tech squad then proceeded to go on a 20-7 run sparked by an expert steal by Christian Nobles, who launched the ball down the court, giving Austin Dasent plenty of time to lay it up.

At the 11:25 mark, Nobles and Jade McLendon highlighted the run by draining back-to-back three-pointers assisted by Dasent and Brandon Jackson, giving the Jets their first lead of the game.

South Georgia Tech continued to rally and pulled ahead by as many as 11 points, bringing the score to 26–15 with six minutes to play in the first half. Unwilling to give up, Georgia Perimeter began a rally of their own and closed that gap to only one point in the final minutes of the quarter, cutting the Jets’ lead to 33–32 at half-time.

The Jaguars retook the lead with a lay-up 20 seconds into the second half and Nobles quickly responded with a pair of buckets from the charity stripe. GPC added another trey three minutes in before Straughter tipped in a shot to tie the score 37-37 at the 6:15 mark. The Jaguars answered with a perimeter shot before Deriece Parks assisted Straughter in a lay-up to tie the score for the last time. With 14:25 left in the contest, Nobles dialed in from beyond the arc to give the Jets a 42-39 lead.

Due, in part, to Mitchell’s deft shooting, the Jets managed to hang onto this lead through the rest of the match. Mitchell posted ten of his 16 points in the last 14 minutes of the game.

The Jets outscored Georgia Perimeter 37–33 in the second half to capture the 70–65 win and advance in the NJCAA Region XVII tournament.

The Jets hit 22 of 47 field goal attempts, while Georgia Perimeter sank 26 of 57. The Jets were seven of 15 from the three-point range and the Jaguars went seven of 19. The real difference was at the free throw line. Georgia Perimeter hit six of 10 and South Georgia was 19 of 26 from the charity stripe.

Trey Mitchell was the leading scorer for the Jets with 16 points. Tim Straughter, who missed the last few minutes of the game due to a cut over his left eye, wound up with 13 points. They were the only two Jets in double-figures, but Austin Dasent added nine points and Brandon Jackson added eight. Both Deriece Parks and Christian Nobles contributed seven points. Jade McLendon and Eric Gooden had four points each.