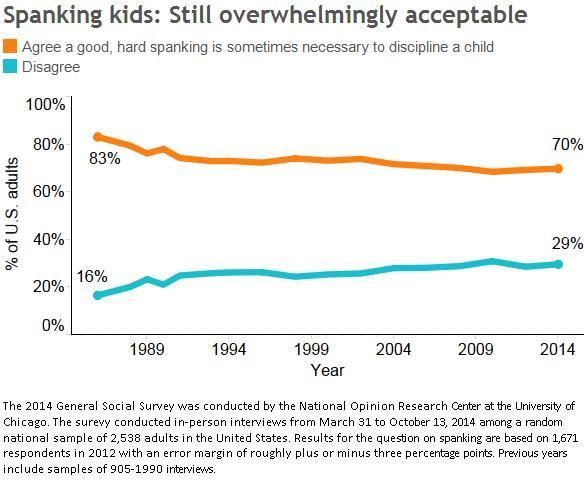 WASHINGTON — NFL star Adrian Peterson’s indictment last September over hitting his son with a switch renewed a long-running debate over whether parents should give up spanking their children. But as some anti-spanking activists acknowledge, the fight is a tough slog as Americans see spanking as largely acceptable. Newly released data find no sign of that changing.

Fully seven in 10 U.S. adults agree a “good, hard spanking is sometimes necessary to discipline a child,” while less than half as many disagree (29 percent), according to the 2014 wave of the General Social Survey released this week by the National Opinion Research Center. After a modest drop in popularity in the late-1980s and 90s, support has stabilized, fluctuating between 68 and 72 percent in the past decade.

Endorsing spanking “sometimes” is far from approving of Peterson’s actions, which allegedly caused numerous injuries. And the news appears to have had minimal impact on overall — a comparison of responses before and after the news broke finds no difference in support.

Millennials — the most recent generation to have been children — aren’t leading any attitudes change on the issue of spanking, in contrast to gay marriage and marijuana. If anything, they are slightly more supportive than their elders. These small differences should not be interpreted too strongly — a statistical analysis by Fivethirtyeight’s Harry Enten last year found age was not a strong influence on child spanking views after controlling for other factors. Enten found race, region, religion and partisanship are key influences toward these attitudes.

Who doesn’t approve of spanking children? The survey finds two interesting groups where most oppose the practice. The first is New England residents — 55 percent disagree that it is sometimes necessary to spank a child in the survey, 19 points higher than any of the other Census divisions.

Spanking is most acceptable in the South, with 80 percent agreeing it is necessary. But even across other regions outside New England, over 60 percent agree spanking is sometimes necessary. (Regional breakdowns include data from 2010, 2012 and 2014 to boost sample size).

Most Jewish-Americans also stand out for their hesitance about spanking — 59 percent disagree that spanking children is necessary in combined waves from 2006-2014, while at least six in 10 Protestants, Catholics, other faiths and those with no religion say the opposite. The sample size for Jewish respondents is small given their small share of the population — only 128 cases in combined surveys since 2006 — but they are large enough to be statistically significant by traditional metrics.

Given their small size in the population, Jews and New Englanders are not likely to weigh down support for spanking in the future. Support for spanking children has been mostly locked in place for three decades and appears here to stay.