What’s trending: The return of #TheDress, 11-year-old Christian Grey and a ‘Sneeky’ Wheel of Fortune puzzle 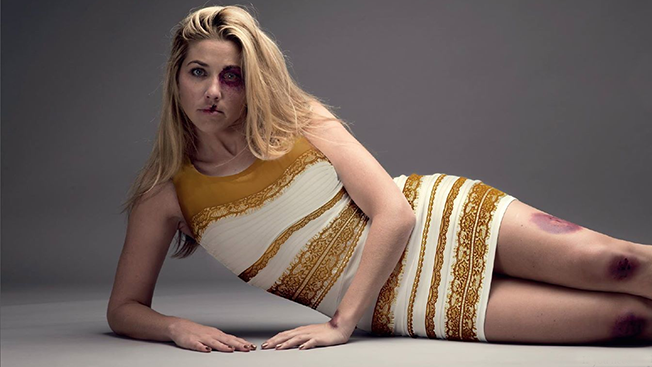 1. The South African branch of The Salvation Army is hoping the ambiguously colored dress people couldn’t stop talking last week will get people talking about a more serious optical illusion.

In an topically astute attempt to raise awareness of domestic violence, the organization recently released an ad showing a woman covered in bruises, wearing a definitely white and gold version of #TheDress and posing beneath the words “Why is it so hard to see black and blue?”

The ad copy reads: “The only illusion is if you think it was her choice. One in 6 women are victims of abuse. Stop abuse against women.”

2. Once upon a time, there was a mother in Manchester, England who thought her 11-year-old son’s decision to dress up as the BDSM-loving title character from 50 Shades of Grey—shiny suit, eye mask, cable ties—wouldn’t get him booted from his school’s World Book Day celebration. She was wrong. And indignant.

“One of the teachers went dressed as Dexter and I don’t see why sex is seen as more offensive than murder,” she said.

3.  A contestant on a recent episode of Wheel of Fortune blew it harder than Sneezy blows his nose.

“Sneeky” probably would have been a pretty cool dwarf, though.