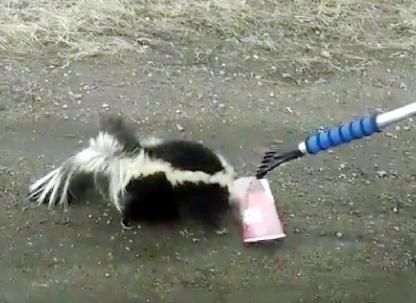 MANKATO — When a Minnesota man saw a skunk with its head caught in a plastic cup stumbling around near a highway on-ramp, he couldn’t help but laugh.

But then he helped.

“It kind of looked funny, but it was also really sad to see,” Robert Kolbe told the Mankato (Minn.) Free Press. “I’m sure it was scared.”

Kolbe, 31, and his fiancée, Bobby Jo Eckstein, spotted the skunk Saturday afternoon beside North Riverfront Drive near the westbound Highway 14 on-ramp. The striped animal was walking toward the highway, so they turned around at the next exit and went back.

The skunk was near the road, trying to claw the cup off but making little progress. The skunk’s claws were obstructed by a curved plastic lid with the side that fits on the cup facing outward. The lid looked a bit like a cone put around a dog’s neck to prevent it from scratching.

Kolbe was worried about getting sprayed, but he said the skunk’s life was in danger, and he could always clean his clothes.

Kolbe grabbed the only tool at hand, an ice scraper, and held down the bottom of the cup. The skunk, which had gotten stuck after biting a hole on the side of the cup, was able to pull itself free.

Then Kolbe noticed the curved plastic lid. It wasn’t clear whether the skunk got its neck through the lid just before biting into the cup or if the lid had been there for some time.

In any case, Kolbe followed the skunk to remove the lid, but the little creature was having none of it and scurried off into the brush.

Before it did, though, the skunk paused and looked back.

“I could see its eyes,” Kolbe said. It looked scared but also “relieved to have that off of its head.”

Kolbe posted a video of the skunk’s rescue to Instagram (warning: background music in the video contains foul language).

For him, the moral of story is simple: Don’t litter.

Think of the skunks.