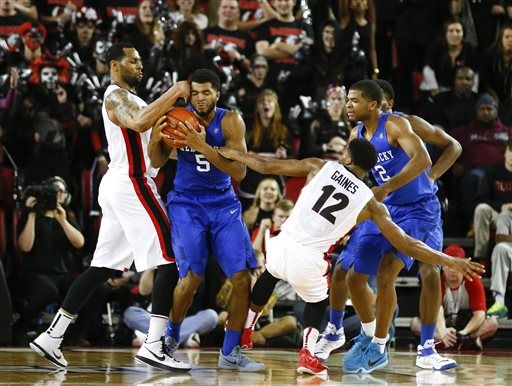 ATHENS, Ga. (AP) — Georgia may already have secured its spot in the NCAA tournament field.

All the same, senior Nemanja Djurisic doesn’t want to leave anything to chance in the Southeastern Conference tournament.

“That’s something we’re not sure of,” Djurisic said Tuesday. “We’d rather take care of our destiny and control what we can, and that’s winning the next game, and doing everything in our power to win our next game. Winning and surviving is something that is very important for us and we’re going to focus on that.”

Some projections have Georgia as a tournament lock.

ESPN’s Joe Lunardi lists Georgia as a No. 9 seed and CBS Sports’ Jerry Palm projects the Bulldogs as a No. 10 seed in the NCAA tournament.

Senior forward Marcus Thornton, the team’s leading scorer and rebounder, insists he pays no attention to the projected NCAA brackets.

“I don’t look at it at all,” Thornton said. “People talk about that but I’m more concerned with what we can do to win. We want to keep winning. We want to play as much basketball as we possibly can.”

One year ago, Georgia settled for a NIT bid despite a strong 12-6 SEC record. A poor nonconference showing left the Bulldogs only 19-13 last year when NCAA bids were announced. They split two NIT games to finish 20-14.

Georgia made a much better impression in this season’s nonconference schedule with wins over Colorado, Kansas State and Seton Hall.

The Bulldogs have back-to-back 20-win seasons for the first time since three straight from 1996-98. They set a school record with six SEC road wins.

The strong road performance in the league included wins at Texas A&M and Mississippi, 20-win teams who were part of the four-way tie with Georgia and LSU for third in the league.

“This is a team that really does well in any type of situation,” Thornton said. “We are an experienced team and that has enabled us to have the success that we have had on the road.”

Injuries to guards Kenny Gaines and Juwan Parker have kept the Bulldogs’ focus on finding a healthy lineup for the SEC tournament.

Gaines, the Bulldogs’ second-leading scorer, has a sprained left foot and missed the team’s final regular-season game. Parker missed 11 games with an Achilles injury and was available only in a limited role last week.

The health of Gaines, the team’s best perimeter defender, is a key to Georgia’s postseason outlook.