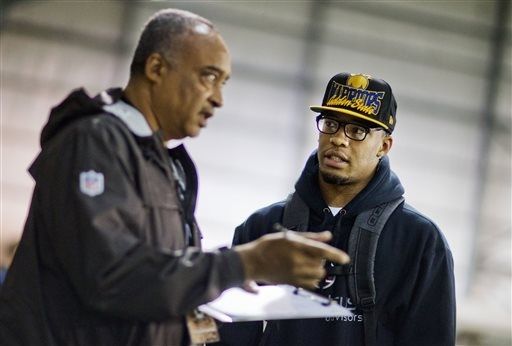 Working out at the Yellow Jackets’ pro day on Friday, Mason ran drills at his accustomed position, but he also took snaps at center — a position he’s never played in a game.

Mason, a first-team All-ACC selection and a third-team All-America by The Associated Press, hopes to draw interest as a middle-round pick in the NFL draft April 30-May 2.

So does Smelter, but he had to watch from the side while his former teammates worked out.

A standout receiver as a senior, Smelter is still rehabbing from surgery on his left knee after getting injured in the first half of Georgia Tech’s overtime win at Georgia.

Receiver Darren Waller and linebacker Quayshawn Nealy are projected as potential late-round picks, but most of the attention thus far has gone to Mason and Smelter.

Mason said he’s made most of his experience at the Senior Bowl and the NFL scouting combine, adding that teams “really like” his footwork, his improvement in pass-blocking sets and his leadership in helping Georgia Tech lead the nation in rushing.

At 6-foot-1, 300 pounds, Mason has been told that some teams are eager to see him work at center because of his height and arm length.

“That’s why the transition will be easier,” he said. “I’m doing both (positions). I started working at center last summer. Worked in practice some, but didn’t get a lot of reps.”

Smelter was sidelined him for the Atlantic Coast Conference championship loss to Florida State and the Orange Bowl victory over Mississippi State. As Georgia Tech ended the season 11-3 and ranked No. 8, Smelter tried to stay focused on his rehab, but his emotions were conflicted while missing high-profile games.

Smelter wonders if he might have gone as high as the late second round before the injury. He began creating a buzz last year in a breakout game at Virginia Tech, catching five passes for 100 yards, including a 31-yard touchdown reception late in the fourth quarter of the Jackets’ three-point win.

Now, with the chance of being ready for training camp in late July, the 6-3, 222-pound Smelter is encouraged that his draft stock hasn’t fallen too far. He averaged 20.4 yards in 35 receptions.

“I wasn’t really thinking about the draft when I got injured,” Smelter said. “It was more like, ‘Man, I want to be out there playing in those last two games of the season.’ That’s what really hurt the most, but with some time now I’ve got my spirits up and just trying to rehab every day.

Like Smelter, Waller had plenty of work run-blocking in Georgia Tech’s spread option attack, but he has the size (6-5, 241) that’s causing NFL teams to consider him at tight end as well as wideout.

“From the combine to here, I was focused more on route-running,” Waller said. “Just the little nuances, coming out of breaks, how fast I can snap my eyes around, are my knees over my toes.”