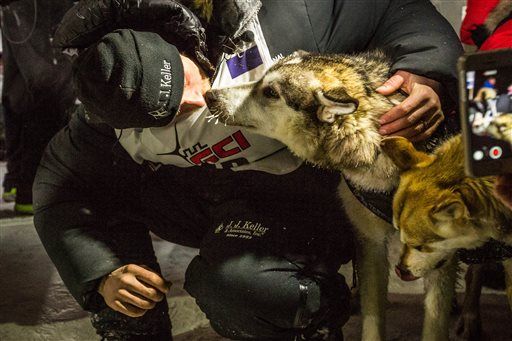 NOME, Alaska (AP) — Dallas Seavey has won his third Iditarod in the past four years, beating his father and more than 60 other mushers to the Bering Sea coastal town of Nome early Wednesday after racing 1,000 miles across Alaska.

Seavey came in under the city’s famed wooden-arch finish line to wild applause from fans lining the street, some who poured out of the bars that stayed open into the wee hours.

An exhausted Seavey, who also won the Iditarod Trail Sled Dog Race in 2012 and 2014, petted and hugged his dogs after their victory.

“It takes a whole team to get any of us here,” he told reporters at a finish line ceremony, which was broadcast and live-streamed. Later, he hoisted two of his dogs onto his lap and officials draped the animals with garlands of yellow flowers.

“As long as you take care of the dog team (and) make good decisions, good things will happen. Wins are a result of doing what we love,” Seavey said, adding he tried to keep the race fun.

He said he and his father, Mitch Seavey, who won titles in 2013 and 2004, encouraged each other along the way.

The elder Seavey was en route to Nome in second place later Wednesday morning, about four hours behind his son. Nome hometown musher Aaron Burmeister was in the third place, Jessie Royer was fourth, and Aliy Zirkle was in fifth place.

Dallas Seavey increasingly put distance between himself and the rest of the field during the latter part of the race. He held a 25-mile advantage early Tuesday — a far cry from how he won the race last year. Dallas Seavey was running third in the 2014 Iditarod when a freak snowstorm blew the leaders out of the race, and the younger Seavey didn’t know he had won the race until a cameraman broke the news to him.

On Wednesday, Dallas Seavey was presented with $70,000 and the keys to a new pickup truck. The winner’s purse increased this year, and the top prize was $19,600 more than what he pocketed last year.

“I’m pretty tired right about now — it’s been a tough race,” he said. “The cold zaps you. The dogs, they’re very lively, but it takes a lot of effort to keep them well-fed, keep them rocking and rolling. This is a hard dog team to keep up with.”

Royer and Zirkle each attempted to be the first woman to win the race since the late Susan Butcher won her fourth title in 1990.

Poor weather south of the Alaska Range this year forced the official start to Fairbanks, on the northern side of the mountains. Not much snow fell south of the range, and officials said the conditions in the normally treacherous Dalzell Gorge were made even more dangerous by a lack of snow. That’s the location where many mushers crashed their sleds in 2014, causing many to scratch.

A new race route was created, with much of it run on river ice. It allowed new communities to serve as checkpoints, including the Athabascan community of Huslia, famed for its sprint sled dog races.

The ceremonial start in Anchorage went on as planned on March 7. Snow had to be trucked in so mushers could navigate paved streets, but there was little snow elsewhere in the city. The snow brought in for the race barely lasted the few hours it was needed because of temperatures nearing 40 degrees and rain.

A total of 78 mushers began the race March 9 in Fairbanks. Eight scratched, and one was disqualified. Two dogs have died in this year’s race, including one that was hit by a car after getting loose during the ceremonial start. The other dog that died was on the team of four-time champion Lance Mackey.