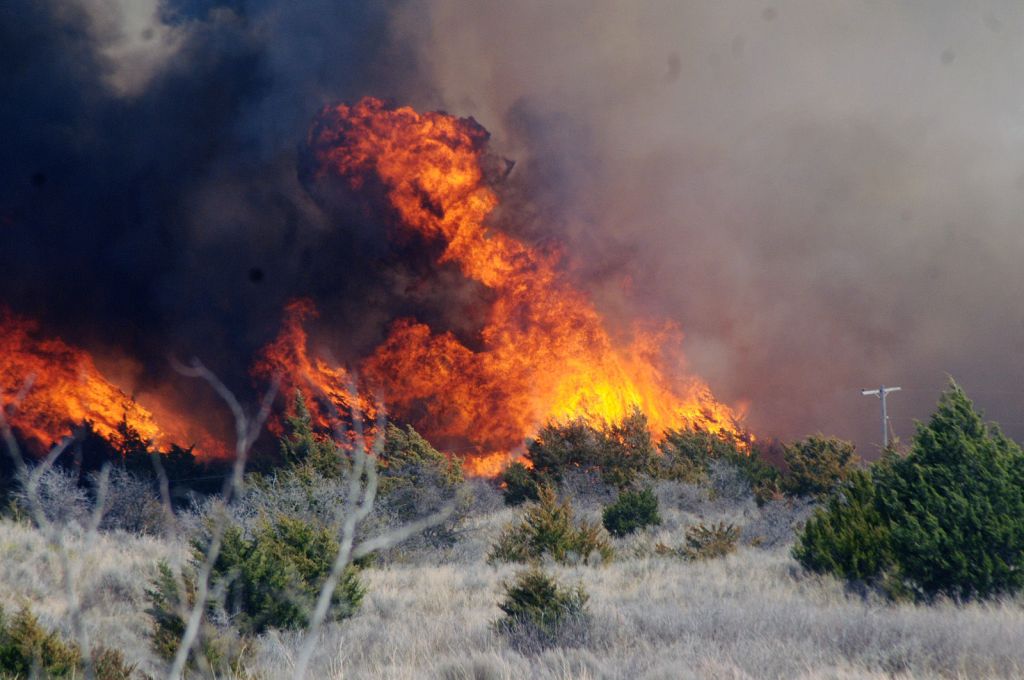 With flames licking the roads that surrounded her home Monday night, Terry Roedell paced, packed some belongings and then prayed for friends and family whose homes were in the direct line of one of Northwest Oklahoma’s largest fires in recent years.

“All you can think is My God. It happens and if it happens it is God’s will and I can’t do anything about it,” Roedell said. “I just packed up some stuff that is about all you can do. There is nothing here worth more than my life.”

All told, the fire burned 22,300 acres in Woodward County over the course of two days and was 70 percent contained by late Tuesday afternoon.

According to Woodward Emergency Manager Matt Lehenbauer, more than $1.1 million in damage has occurred. But those estimates may change as the days pass and more is discovered.

The cause of the fire is under investigation by the Oklahoma Department of Agriculture, Lehenbauer said.

The fire started Monday afternoon near Boiling Springs State Park and spread quickly to the northeast fueled by strong south winds, dry ground and plenty of brush and trees.

More than 150 firefighters worked through the night on Monday in an attempt to get a handle on the blaze. Fire units came from all across this area, other parts of Oklahoma and Kansas and Texas to assist and the Oklahoma Department of Forestry brought in aircraft and personnel.

Local oil field companies assisted by providing tankers loaded with water as the fire was totally in a rural area where water sources are often hard to find.

The Blackhawks are stationed at the Oklahoma Army National Guard’s Army Aviation Support Facility and carry 660-gallon containers that are filled with water from ponds and reservoirs near the fire.  The containers, called “Bambi Buckets,” then drop the water at locations designated by the firefighters or forestry service personnel on the ground.

“Fighting fires with helicopters can be a dangerous undertaking, but our helicopter pilots and their crews are highly trained and have significant experience fighting fires,” said Col. Max Moss, public affairs officer for the Oklahoma National Guard.  “We want to do our part to assist the firefighters and others that are doing everything they can to contain this wildfire.”

By late Tuesday afternoon, the fire was 70 percent contained.

According to Lehenbauer, the change in temperature and the wind laying down for a brief time late Monday night gave firefighters a chance to begin to gain control. But a shift back to gusting winds from the north around 2 a.m. Monday robbed them of some of those gains.

Complications seemed to be the rule for fire fighters battling this particular inferno.

According to Lehenbauer, everything from availability of water, to a constant gusting, 25 to 35 mph wind, to too many curious people crowding roads and a constant stream of 911 calls made this fire difficult.