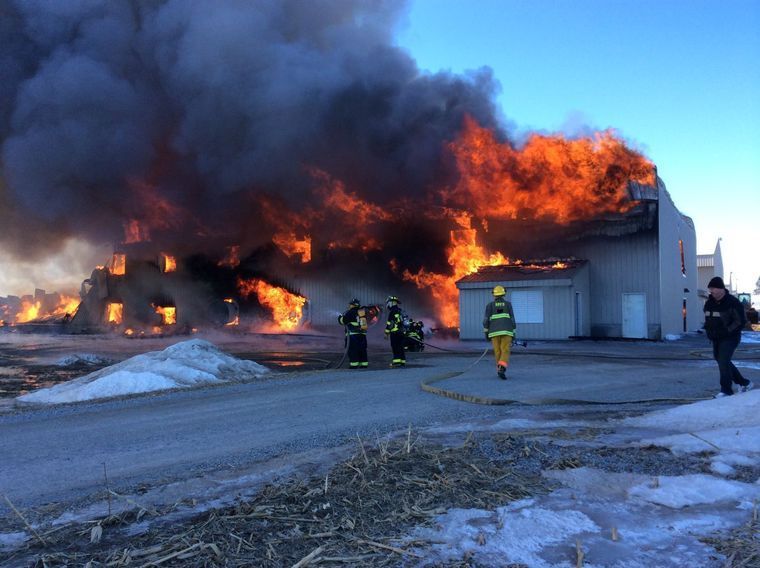 CHAZY, N.Y. — Fifty thousand chickens perished when a barn at a poultry farm burned to the ground Thursday.

“It’s devastating to lose the birds, but we are grateful no one was hurt,” said Willie Giroux, who owns Giroux’s Poultry with his brother, Craig.

No employees were in the 350-by-75-foot building when it caught fire, he said.

He believed a worker reported the fire, which quickly turned into a conflagration that left just the north wall standing.

The fire was mostly quenched by about 12:30 p.m.; a firefighter kept a spray of water on the smoking rubble from the ladder of an aerial truck.

It didn’t appear that four storage silos standing between the west side of the ruined barn and the one beside it were damaged.

Gigantic clouds of thick, black smoke marred an otherwise bright blue, cloudless sky over the barn. Smoke was visible from miles away.

In all, at least 18 departments responded, including crews from Vermont and Canada. Cahoon said about 70 firefighters fought the blaze.

“The mutual aid was great. I thank them for that,” he said.

The poultry farm has been in the family for four generations, since the 1920s, and there had never been a major fire.

“We’ve been very fortunate in that regard,” Giroux said.

The building is insured, he said, but the most important thing is no one was hurt.

He thanked the firefighters for their rapid response.

“They saved the others (barns),” Giroux said. “They did a great job.”

Moore and Heath write for the Press-Republican in Plattsburgh, N.Y.