Georgia State gives Jacksonville a huge up, a comical down 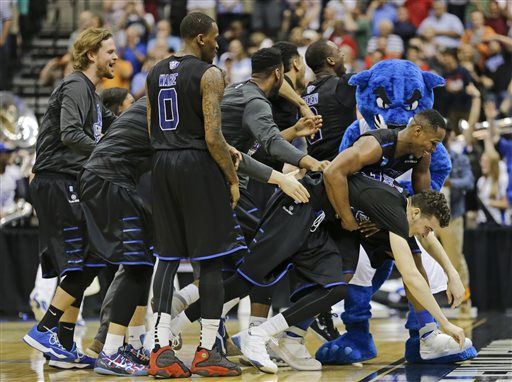 JACKSONVILLE, Fla. (AP) — The shot went in and the coach went down.

It was a comical and memorable moment that proved to be the highlight of the four games played in Jacksonville and could define Thursday’s opening day of the NCAA Tournament.

Welcome to YouTube, Vine and “One Shining Moment,” Ron and R.J. Hunter.

“I wish every dad in America could have that opportunity, what I just experienced with my son,” Ron Hunter said.

R.J. Hunter hit a 3-pointer with 2.7 seconds remaining that lifted 14th-seeded Georgia State over No. 3 seed Baylor and knocked good ol’ dad right off his chair. Ron Hunter was working the sideline in a rolling seat less than a week after tearing his left Achilles tendon celebrating the Sun Belt Conference championship.

“I saw him cannonball off his chair,” R.J. said. “I told him, they’ve got to get him a chair with a back or something because that wasn’t going to work.”

Hunter shrugged off a poor shooting performance to come through when his team needed him most.

Hunter delivered a steal and a layup that trimmed Baylor’s lead to 56-53, and then he drained an deeper-than-NBA-range 3 for the win after the Baylor’s Kenny Chery — an 83 percent free-throw shooter — missed the front end of a 1-and-1 that could have put the game away.

Hunter finished with 16 points on 5-of-12 shooting.

“I had to convince my guys that we could beat them,” Ron Hunter said. “And the only way I could convince them is I said we had to throw the first punch and the last punch, and the only way to do it was by pressing. I wanted Baylor to know we weren’t afraid to play them.”

The Panthers (25-9) advanced to play sixth-seeded Xavier on Saturday.

Could Georgia State deliver another upset or another celebration gem?

“It’s unbelievable and a dream come true,” R.J. Hunter said. “I hugged my sister and said, ‘We’re going to be in One Shining Moment. We always watched that as a family. That’s what we watch when your dad is a coach. It’s unbelievable, man. It’s a little surreal right now. It’s a little hard to digest, and God looked out for me today.”

Aside from the Hunters, here are some things to know about what happened in the NCAA Tournament in Jacksonville.

Justin Jackson hit a tying jumper in the final minute and added a fast-break dunk to help the Tar Heels edge Harvard 67-65.

“It’s the luckiest I’ve ever felt after a basketball game in my entire life,” said North Carolina coach Roy Williams, whose team squandered a 16-point lead in the second half before Jackson came to the rescue.

Next up is Arkansas, which edged pesky Wofford. The Terriers missed three 3-pointers in the final minute-plus, allowing the Razorbacks to hold on.

X-MEN ADVANCE: Xavier enjoyed the only comfortable closing minutes in Jacksonville. Matt Stainbrook scored 20 points, Dee Davis added 17 and the sixth-seeded Musketeers beat No. 11 seed Mississippi 76-57. The 6-foot-10 Stainbrook took advantage of his size in the post, making 8 of 10 shots in the paint and adding nine rebounds and five assists. Davis was nearly as good from the outside, hitting 4 of 9 shots from 3-point range.

DEAD LEGS: Mississippi played like a tired team. And no one could blame the Rebels for having dead legs considering they exerted so much energy in overcoming a 17-point deficit to beat BYU in the First Four in Dayton, Ohio, about 43 hours earlier. Ole Miss scored 62 points in the second half Tuesday night, boarded a flight to Jacksonville, got to bed about 5 a.m. Wednesday and spent the next 30 hours playing catch-up.

SHOOTING SLUMPS: Mississippi’s top two scorers picked a bad time to have rough days shooting. Stefan Moody and Jarvis Summers combined to miss 21 of 26 shots in a 76-57 loss to Xavier. They weren’t alone, either. Wofford’s Karl Cochran finished 4-of-19 shooting, including 2 for 12 from 3-point range.

CHAMPION HERE? The last two times Jacksonville hosted the NCAA Tournament, the winner started here. Florida won it all after opening in Jacksonville in 2006 and Duke did the same thing in 2010. Could the River City make it 3-for-3? It’s up to Arkansas, Georgia State, North Carolina or Xavier to extend the streak.