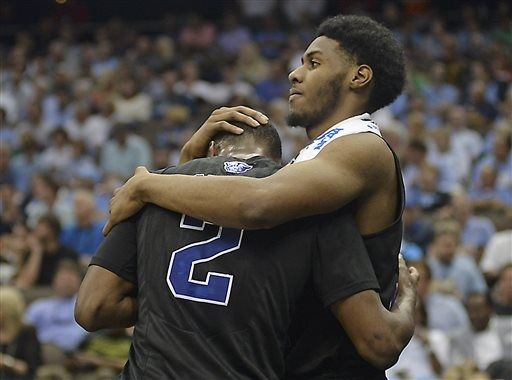 JACKSONVILLE, Fla. (AP) — Georgia State will take a bus ride home to Atlanta instead of a long airplane ride to Los Angeles.

The biggest feel-good story of the NCAA Tournament ended with a 75-67 loss to Xavier on Saturday that prevented the 14th-seeded Panthers from an improbable appearance in the West Regional semifinals.

“I told them to not be sad,” coach Ron Hunter said. “There is nothing to be sad about, especially for me.”

The coach’s torn Achilles tendon, and his memorable spill from his rolling chair during Georgia State’s dramatic opening win, helped make the Panthers the darlings of the tourney.

Hunter shed tears of joy during his postgame press conference.

“What a great week,” he said. “Unbelievable week. … I’ll be honest with you, the greatest week of my life.”

Xavier’s reserves proved to be the difference, pushing the Musketeers to the Sweet 16 for the third time in six seasons under coach Chris Mack. Jalen Reynolds and Myles Davis combined for 38 points for Xavier (23-13), which shot 81 percent in the second half, making 13 of 16 shots.

“I thought our game plan was great. If they had just made a couple mistakes here and there, and they just didn’t,” Hunter said. “They beat us, We didn’t beat ourselves. We can walk away a little bit more proud.”

Next up for Xavier is No. 2 seed Arizona, who is led by former Xavier coach Sean Miller. Mack is a former Miller assistant.

Hunter was already a big story after tearing his left Achilles tendon celebrating Georgia State’s Sun Belt tournament title. He then enjoyed a father-son moment he’ll always cherish after R.J. Hunter made the winning 3-pointer in Thursday’s 57-56 victory over No. 3 seed Baylor.

R.J. was outstanding again Saturday, scoring 20 points. But the junior, who faces a decision on whether to declare himself eligible for the NBA draft or return for another season under his father, didn’t get enough offensive support from his teammates.

Reynolds, meanwhile, dominated inside for Xavier, scoring 21 points and grabbing six rebounds. Davis made 5 of 8 3-pointers and finished with 17 points after making a pair of free throws for a 69-59 lead with 1:03 remaining.

Dee Davis made all three of his field goal attempts and went 6 for 6 from the foul line over the final 44 seconds to put the game away.

“That’s a good team. Dee Davis willed them,” said R.J. Hunter, who is friends with Davis from their days playing AAU ball together in Indiana. “They didn’t make any mistakes.”

Hunter pulled R.J. from the game with 20 seconds left and stood to give his son a big bear hug with Georgia State fans rising to their feet to cheer the star player one more time.

Georgia State (25-10) overcame double-digit deficits twice in the Baylor win, so there was no panic when the Panthers fell behind 17-8 in the first eight minutes Saturday night. Kevin Ware made two shots and Ryan Harrow, coming off the bench after missing the tourney opener because of a sore hamstring, hit 3-pointer during an 11-2 spurt that got the Panthers back in the game.

Ron Hunter had his cast replaced Friday after it cracked when he fell out of his chair celebrating R.J.’s game-winner in the round of 64. He made his way Saturday from the locker room to the bench on a scooter, stopping along the way to exchange high-fives with fans.

He got emotional while talking about his son during the postgame press conference.

Georgia State: Hunter’s chair sported a slightly new look with white athletic tape wrapped around the base and legs and green cushions on edge covering the wheels. … Harrow, the team’s second-leading scorer, has been slowed by his injury for two weeks, yet the Panthers had continued to find a way to win without him.

Xavier: The Musketeers also reached the Sweet 16 under Mack in 2010 and 2012. It’s the seventh time they’ve done it overall.

Georgia State’s season is over.

Xavier faces No. 2 seed Arizona on Thursday in the West Regional semifinals.