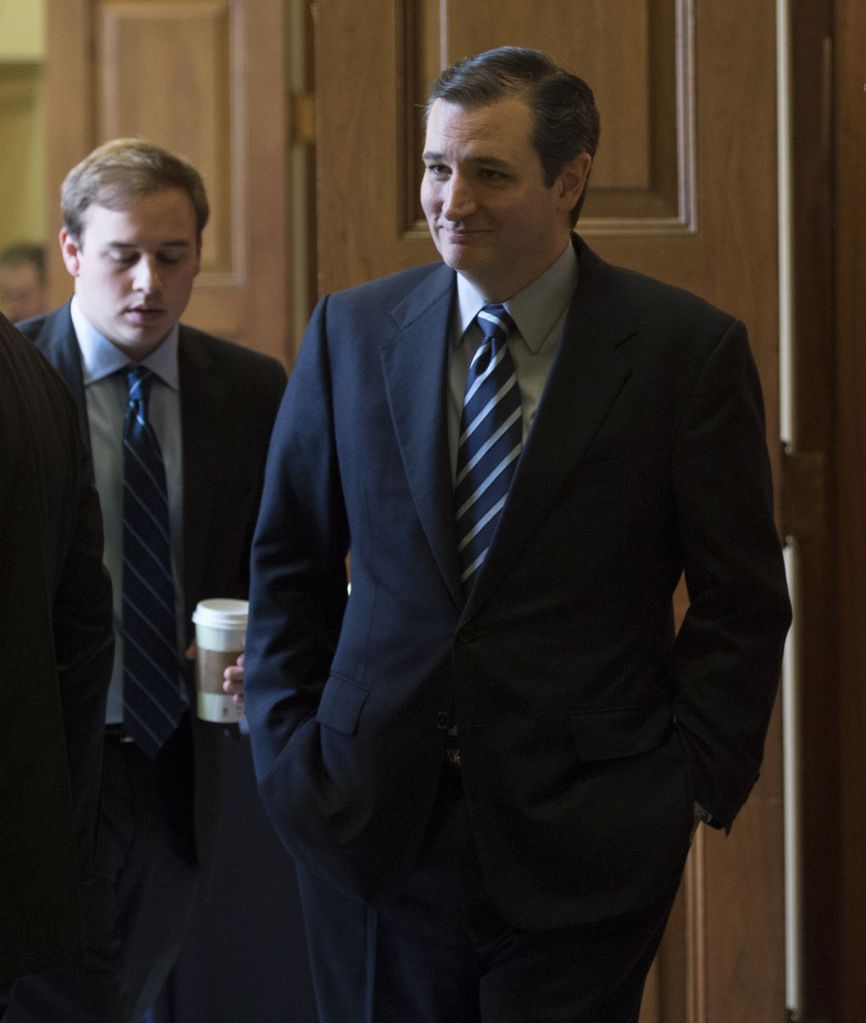 LYNCHBURG, Va. — The 2016 contest for the White House will get its first official big-name entrant on Monday, in a move likely to upend the dynamics of the nascent presidential race.

Sen. Ted Cruz, the combative conservative who has made liberty the clarion call of his politics, will announce his intention to pursue a presidential bid Monday morning at Liberty University in Lynchburg, according to a campaign adviser.

The announcement by Cruz, R-Tex., will make him the first major 2016 contender to formally declare. By skipping the step of forming an exploratory committee and jumping right into the race, he is providing a jolt to a field that has so far been relatively sleepy and potentially pressuring other candidates to step closer to making their own announcements. His entry will also give other Republican contenders — including Wisconsin Gov. Scott Walker and former Florida governor Jeb Bush — a competitive rival on the right.

Cruz, 44, a Harvard-and-Princeton-educated lawyer who was elected to the Senate in 2012, is best known for championing controversial efforts to block implementation of President Obama’s health-care law in 2013. The crusade led to a 16-day government shutdown.

Cruz’s unrepentant battles against the Obama administration and with leaders of his own party have made him a hero to many conservatives and left him with a powerful national network of small-dollar donors. He will aim to raise $40 million to $50 million for his presidential bid.

Advisers said that in coming weeks, as he launches his campaign in states with early caucuses and primaries, Cruz plans to build upon that base of support and cast himself as an uncompromising GOP conservative who has challenged both parties during his short time in Washington.

The Houston Chronicle first reported his planned announcement, and Cruz was expected to call attention to his decision in a Twitter message early on Monday, aides said.

Speaking over the past month to voters in early primary states and college students at the annual Conservative Political Action Conference, Cruz has previewed what his campaign will aim to look like: a grass-roots movement that spreads nationwide his message of intransigent conservatism, including repeal of the Affordable Care Act, abolition of the Common Core education standards, opposition to same-sex marriage and a hawkish foreign policy. He has urged people to participate in a “grass-roots guerrilla campaign” modeled on the one that helped propel him to the Senate.

“The only way we’re going to make this happen is by building a grass-roots army in New Hampshire and in all 50 states,” he said last week in Lincoln, New Hampshire.

Cruz is scheduled to give the convocation at Liberty University on Monday. By selecting the school, a private Christian college founded by the fundamentalist preacher Jerry Falwell, as the site for his announcement, Cruz is sending a clear signal to conservative Republican primary voters about his candidacy and his political positioning heading into the race.

He has assiduously courted evangelicals and other social conservatives as part of an attempt to build a coalition of conservatives frustrated with Republican Party elders in Washington.

The choice of venue also underscores Cruz’s intention to actively court young conservatives. Last month, he told a group of mostly 20- and 30-somethings at CPAC to be “entrepreneurs for liberty” and spread his message of conservatism with a smile.

“If we carry young people, we can turn this entire country around,” he said.

A Cruz aide said the campaign chose to announce at Liberty because it is the largest Christian university in the world and has an extensive base of activist alumni — many of whom live in Cruz’s home state of Texas.

“Liberty enforces a strong message that taking a stand for what is right speaks volumes about character,” said the aide, who spoke on the condition of anonymity to comment ahead of Cruz’s remarks in Lynchburg. Making the announcement there sends a message that the campaign will compete in the race for evangelicals and social conservatives and not run a conventional operation, the aide said.

When Cruz appeared before an enthusiastic crowd at Liberty last year, he spoke urgently about what he sees as a moment of crisis for religious Americans — and received a standing ovation.

“These are troubled times,” Cruz said. “Religious liberty, the very first liberty in the Bill of Rights, the very first protection we have, has never been more in peril than it is right now.”

Rep. Steve King, R-Iowa, an influential figure in his state’s first-in-the-nation caucuses, said in an interview that he welcomed Cruz’s move toward a run and called him an immediately formidable candidate in Iowa, which has a deeply conservative Republican electorate.

“Constitutional conservatives around the country see he is anchored in a fundamental set of values,” King said. “There is also no question he is a very smart man, and a lot of presidents did not have his raw computing power.”

Cruz, who lives in Houston with his wife, Heidi, and two young daughters, graduated from Princeton University in 1992 and from Harvard Law School in 1995. He went on to serve as an attorney in the George W. Bush administration and later was appointed Texas’s solicitor general.

In 2012, after working in private practice, Cruz rattled the Texas Republican establishment when he beat the lieutenant governor, wealthy businessman David Dewhurst, in the state’s GOP Senate primary. His primary campaign was aggressively conservative and suspicious of the party’s mainstream voices, and it was cheered on by conservative leaders and editorialists in Texas and nationally.

Heidi Cruz, a managing director at Goldman Sachs, will take a leave of absence from her job to campaign with her husband, according to a campaign adviser.

Ted Cruz was born in Canada, but legal experts have said that having a mother who was a U.S. citizen qualifies him as a “natural born” American eligible to be president. Cruz’s father, Rafael, left Cuba in 1957. Now a Christian minister, the elder Cruz frequently travels with his son to political events, building relationships with conservative pastors and occasionally introducing the senator to crowds.

Other expected GOP candidates are mulling exploratory committees this month with an eye on formalizing their campaigns in April, once a new federal filing period for political financing begins. Sen. Rand Paul, R-Ky., a friend of Cruz’s and another conservative favorite, is planning a rally in Louisville early next month.

On fundraising — a front where Jeb Bush especially has been making significant strides in recent weeks — Cruz would be able to draw from the conservatives aound the country who have boosted him since he arrived in Congress. Some wealthy donors, such as Hal Lambert, founder of Dallas-based Point Bridge Capital, also are ready to assist.

“Ted Cruz and Rand Paul don’t need to raise as much money as somebody else, if you would, to be contenders, because they have strong organizational situations,” Jack Oliver, a top Bush financier, said in a December interview with Bloomberg News.

Cruz supports fewer restrictions on campaign spending and is a backer of the 2010 Citizens United Supreme Court decision, which laid the groundwork for super PACs that can raise unlimited sums.

On Capitol Hill, Cruz has clashed repeatedly with Senate Majority Leader Mitch McConnell, R-Ky., and at times angered his Republican colleagues with what some consider his brash manner and ideological zeal. This year, Cruz accused GOP leaders in both congressional chambers of not doing enough to counter Obama’s executive actions on immigration. In recent days, he has vocally opposed Loretta Lynch’s nomination to be attorney general and signed a letter by Sen. Tom Cotton, R-Ark., cautioning the ruling Iranian regime against working with Obama on a nuclear deal.

Allies of Cruz’s likely competitors view him as a threat, in particular those Republicans who are wooing the same conservative voters and donors as Cruz. Former neurosurgeon Ben Carson, Louisiana Gov. Bobby Jindal and former senator Rick Santorum of Pennsylvania are three of more than a dozen possible hopefuls who are looking to be the hard right’s consensus choice.

Cruz will probably not be the only Texan seeking the GOP nomination. Former Texas governor Rick Perry also is considering a bid. In an interview with The Washington Post last month, he jabbed Obama and took a veiled shot at Cruz when he said voters are “going to make a rather radical shift away from a young, untested United States senator whose policies have really failed.”

A CNN-ORC International poll released last week found 4 percent of Republicans and GOP-leaning independents supporting Cruz for the nomination, tying him with Perry in eighth place. Cruz is eclipsed in national and early-state polls by former Arkansas governor Mike Huckabee, who would be a direct competitor for the party’s social conservatives.

Still, only a dozen percentage points separate Cruz from Bush in a crowded field in which no candidate has broken away.

A Gallup poll this month found 43 percent of Republicans with a favorable impression of Cruz, while 13 percent were unfavorable and the rest had no opinion. Cruz’s image on this basic measure of popularity is roughly similar to top contenders Bush and Walker.

Cruz’s foreign policy positions have mostly advocated a muscular foreign policy. He has acknowledged in interviews that many Americans have become war-weary, and he has raised concerns about the National Security Agency’s collection of phone records. But he has also been a nearly daily critic of Obama’s leadership in foreign affairs and has said he would consider sending U.S. troops to fight Islamic State militants.

Cruz’s popularity in Iowa, which has long been a make-or-break state for conservative Republican presidential candidates, was highlighted in January when he spoke at a King-hosted summit in Des Moines. He got a rock-star reception as he railed against the health-care law and called for the Internal Revenue Service to be abolished.

Cruz does not believe in climate change and has said that data does not support it. Cruz chairs the Senate committee that oversees NASA and has said that the agency needs to focus more on space exploration and less on Earth science.

As reaction to Cruz’s announcement made its way around the Sunday news shows, California Gov. Jerry Brown, Democrat, said Cruz’s stance on climate change makes him unqualified to run for office.

“That man betokens such a level of ignorance and a direct falsification of the existing scientific data,” Brown said on NBC’s “Meet the Press.” “It’s shocking, and I think that man has rendered himself absolutely unfit to be running for office.”

In June, Cruz will publish his first book, “A Time for Truth: Reigniting the Miracle of America.” Similar to John F. Kennedy’s “Profiles in Courage,” it will feature chapters on leaders who Cruz believes have shown grit in spite of adversity, such as Holocaust survivor and Nobel Peace Prize winner Elie Wiesel.

Cruz’s speaking style sets him apart from most lectern-using politicians. At almost every appearance, he prefers to pace a stage wearing a wireless microphone, mixing wry barbs about Democrats with forceful warnings about what he describes as encroaching liberalism in the culture and federal government.

Cruz’s pitch can border on apocalyptic. “The Obama economy is a disaster, Obamacare is a train wreck and the Obama-Clinton foreign policy of leading from behind — the whole world is on fire,” he said recently in New Hampshire, which hosts the first presidential primary.

Cruz’s characterization caused a startled Julie Trant, 3, to wonder aloud from the audience whether the world was actually on fire, drawing smiles from adults there and later jokes from late-night comedians.

Cruz appeared last Monday on NBC’s “Late Night With Seth Meyers” and shrugged off the blizzard of news stories about the episode.

Speaking the next day on MSNBC’s “Morning Joe,” the senator sounded weary of the coverage and criticized the way he has been portrayed. “By the end of it, I’m Freddy Krueger-like, torturing this girl in her nightmare,” he said.