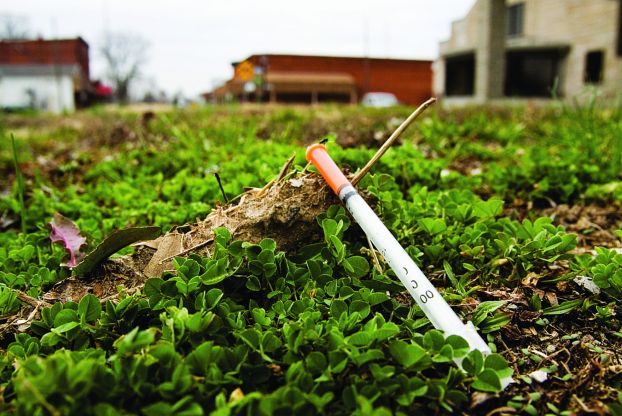 “This is not a Scott County problem,” said Pence at a press conference in this seat of county government. “This is an Indiana problem.”

Pence, a former congressman and potential Republican presidential candidate, said the health emergency will last at least 30 days to address what he called an epidemic. He said it will focus state resources on stopping the spread of HIV and treating those who have contracted the virus that causes AIDS.

The governor said he’s still considering a temporary measure to allow drug addicts to exchange used needles for clean ones in order to halt the spread of HIV locally, but reiterated he is opposed to a permanent program because it might lead to greater illegal drug activity.

“I do not support needle exchanges as a drug treatment policy,” he said. “To anyone who hears the sound of my voice that is using IV drugs, stop.”

Pence met with federal, state and local health officials during his stop in Scottsburg. He said the conversation was “meaningful and candid.” He said the state’s response to the HIV outbreak would include a “robust expansion” of health care programs to address the crisis.

State health officials reported earlier in the day that 72 HIV cases have now been confirmed in Scott County, an impoverished rural section of southern Indiana near Louisville, Kentucky. They said additional unconfirmed and unreported cases will only add to the crisis.

HIV has hit the county’s small, beleaguered city of Austin hard in the past four months. The bulk of the confirmed cases occurred there, caused by intravenous drug users sharing contaminated needles. Health officials also said some cases were traced to sexual activity in the community of 4,300 residents.

Elizabeth Beilman is a reporter for the Jeffersonville, Ind., News and Tribune. Contact her at elizabeth.beilman@newsandtribune.com.

Then and now: Images of Selma march for the past, present

An estimated 3,000 people attended a commemorative event Wednesday that followed the path of the original Selma-to-Mongomery march for voting... read more