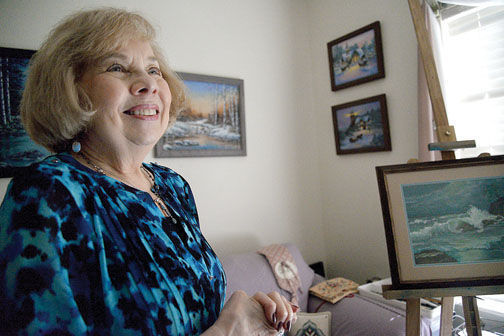 VERNON TOWNSHIP, Pa. — It is said that when God closes a door, he opens another. In the case of Pennsylvania resident Doris Habel, God must have installed a garage door to fit the gift he bestowed on her following a stroke.

The gift Habel was given five years ago, at age 73, was the ability to paint scenery, animals and landscapes. Now at age 78, she won her first blue ribbon for one of her paintings at the Juniper Village annual art show in February.

“This gift was given to me at a dark time in my life,” Habel said.

While she laid in her hospital bed after a stroke in 2010, Habel wondered if her life was over and if she’d ever get back home to her family.

Habel was unable to move and had aphasia, a condition that affects a person’s ability to communicate and is common among those who have had strokes.

Habel said colors started flashing before her eyes. At first the colors scared her, then they had a calming effect on her.

“A peacefulness came over me and I thought, ‘This is good,’” Habel said. At that time she came to a realization, “I will get through this. My family needs me.”

Before having the stroke, Habel had been creative by doing needlework and making samplers, which are a demonstration or test of skill in needlework. They often include the alphabet, figures, motifs and decorative borders.

Once she was released from the hospital, Habel found she was limited to what she could do in her spare time. Her needlework ability was gone and she couldn’t read. Habel felt drawn to paint a picture, which she said was odd because she had never had a painting lesson, let alone picked up a paint brush.

Her first painting was a seascape called “Peace in the Storm.” Her husband, Bob, convinced her to have it framed at Meadville Fine Arts. Habel said Meadville Fine Arts owner Tim Kirk was impressed with her artwork and encouraged her to keep painting.

“I was just astounded at the quality of her work,” Kirk said. “Her artwork is fantastic.”

Habel didn’t realize how good her paintings were until Kirk sold “Peace in the Storm.”

At first, Habel thought one of her relatives bought the painting. That’s until Kirk told her a woman from California purchased it.

“I didn’t know what I had,” Habel said. But once the first painting sold, she said, “Thank you Lord, this is truly a gift.”

Kirk said selling a piece of artwork to someone other than a friend or family member is a good measuring stick of how well you’re doing as an artist.

“That’s when you know your work is good, when a stranger is willing to buy it,” Kirk said.

In February, Habel saw an advertisement for Juniper Village’s annual art show. The theme “Awaken Your Passion” spoke to her and compelled her to enter some paintings into the contest.

The show was “People’s Choice,” meaning instead of judges, those attending the show would vote on the winning art. Habel won a blue ribbon and an honorable mention for two separate paintings. She felt the blue ribbon verified her artistic talent.

Her blue ribbon painting was a piece named “In the Gloaming,” which was named for a song Habel sang as a student in a one-room schoolhouse in Butler County. Her honorable mention painting was of a group of Native American teepees in the winter.

“It was so touching to make such a difference in somebody’s life,” Musone said. “That somebody that is so modest that has that much talent is finally getting the recognition she deserves.”

Habel said she told her doctor at the time, Dr. Tom Arno, when she first realized she could paint after the stroke. She said Arno told her that sometimes stroke victims who have one side of their brain damaged notice the other side steps up.

Many stories refer to this phenomenon as acquired savant syndrome. There are several documented cases where stroke and head trauma victims have picked up artistic talents such as classical pianist and painter.

Habel said the desire to paint came to her easy, but the ability to do so didn’t.

“God gives you a gift — but you have to work at it,” Habel said.