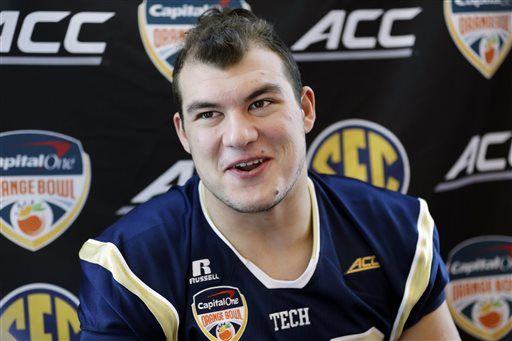 ATLANTA (AP) — Adam Gotsis wasn’t on any of the recruiting lists when the Australian signed with Georgia Tech three years ago in what looked like a strange experiment.

Georgia Tech coach Paul Johnson believed he’d landed a five-star talent. He said on that signing day in 2012, “I will match him up against almost anybody. He’s 6-foot-5, 300 pounds and can run.”

Gotsis is preparing for his third year as a starter on the Yellow Jackets’ defensive front. After spending much of his youth playing Australian Rules Football, he was a major part of an improved defense that helped Georgia Tech win 11 games, including the Orange Bowl, last season.

“It’s been a journey,” Gotsis said. “I remember the whole recruiting process and just trying to find any college to have some interest in me.”

Johnson was won over by the size and speed of Gotsis. Those strengths — and his production on the field — make Gotsis a name to watch in next year’s NFL draft.

In the last two seasons, Gotsis has 7 ½ sacks and 20 tackles for losses. He had four tackles, including one for a loss, and blocked a field goal in the Yellow Jackets’ win at Georgia last season. He added four more stops in the Orange Bowl win over Mississippi State.

“Adam is going to go all-out on every play,” said linebacker P.J. Davis. “He’s going to give you the best he’s got.”

Asked after Wednesday’s spring practice to reflect on his 2012 expectations for Gotsis, Johnson said, “Truthfully, he has probably played even better than I thought he would. I thought he would be a player who would help us and contribute. He’s ended up being what, a three-year starter?”

Gotsis had a taste of American football in his Abbotsford, Australia hometown, but it was nothing like his initiation to the major college game.

“I remember I didn’t even know all the rules when I first started playing,” he said. “It took me about three or four years to figure out what pass interference was.

“Just the rules and then the speed of the game, adjusting to the speed and the intensity they have here. … Here it’s full-bore every single play. You can’t take a play off.”

Gotsis said his introduction to a weight room helped him adjust.

“We don’t really have lifting programs in Australia,” he said. “Just coming over here and being on a structured weight program and things like that, I think I’ve definitely improved.”

Gotsis said he hopes his success opens the way for more Australian players to play in the college and the NFL. He cheered when the San Francisco 49ers signed Australian rugby star Jarryd Hayne to a three-year contract as a running back this month.

“That’s huge,” he said. “He’s never played football before. For an NFL team to take a shot on him and sign him to a contract, that’s huge for football in Australia. There are a lot of guys back home who never thought they’d have an opportunity to come to the States and even play a sport, let alone football.

“We have a lot of talent. I think that’s going to open a lot of channels for Australian guys going to universities. They might want to come over here and give it a shot.”