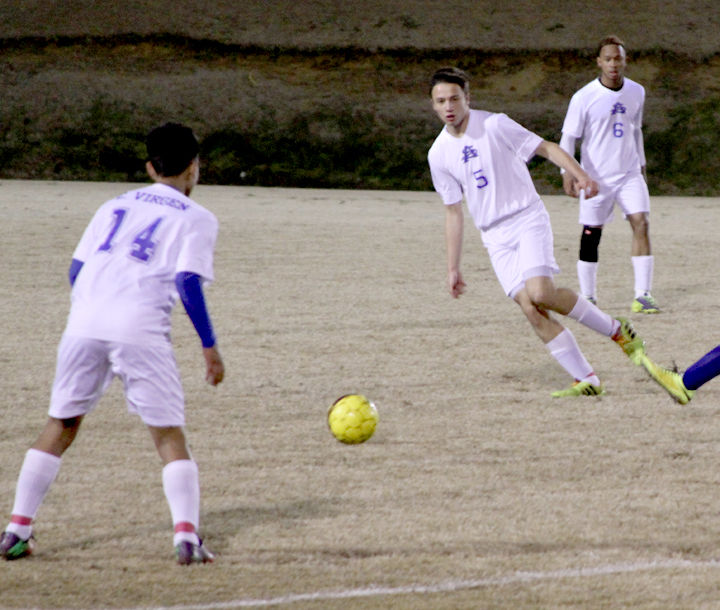 AMERICUS – The Americus-Sumter Panther soccer team dropped a 6-2 decision to the Bainbridge Bearcats on March 20 before bringing in a pair of crucial region 1-AAAA victories on March 25 and 27. The Panthers took a 4-0 victory over the Dooly County Bobcats on the 25th. Two days later, the team returned to the pitch in Americus to gain a 2-0 win over the Thomas County Central Yellowjackets.

With the wins, the Panthers improve their region 1-AAAA record to 5-2. The team is currently 7-6 overall.

The action began on March 20, when the Panthers lost the Bainbridge match 6-2. The Bearcats put up two quick goals, and then the Panthers countered with a goal of their own. This point came on a long ball kicked by Jonathan Abarca and put in the back of the net by Frankie Gonzalez.

The Panthers came out and scored first in the second half to narrow the gap to 4-2. The team’s second goal came on a cross from F. Gonzalez with Luis Torres scoring. Bainbridge scored two more goals to seal the deal.

“The Panthers took more than 25 shots and put 15 of these on goal.” Fowler continued “Three Panther shots even hit the Bainbridge frame and bounced off, rather than in. Again, the Panthers moved the ball around well, and we had a ton of shots and opportunities, but we couldn’t get anything in.”

The Panthers scored all four of their goals against Dooly County during the first half of the match. Abarca and F. Gonzalez both scored before Jose Avando put in a penalty kick after a Dooly player was called for a handball inside his 18-yard box. Ovando scored a second goal on a ball that was blocked by the Dooly keeper.

On the Panthers’ performance on the pitch, Fowler stated, “The [Panthers’] defense did a great job keeping the ball away from our goal.”

The Panthers then went on to take down Thomas County Central 2-0. Both of the Americus-Sumter goals in the match against the Yellowjackets were scored in the first fifteen minutes of the game.

Abarca took the first shot on the goal, but the TCC keeper blocked it. The Yellowjackets’ goaltender but did not secure the ball and F. Gonzalez saw an opportunity to put it in the net. Abarca scored the second goal with F. Gonzalez. After the game, Fowler said that “Alez Gonzalez, our keeper, did a great job in the goal.”

The Panthers travel to Cordele on April 7 to defend their region record against the Crisp County Cougars. The team will then travel to Douglas to face the Coffee County Trojans on April 10. The Panthers return to their home field on April 14, hosting Cook County in region action.