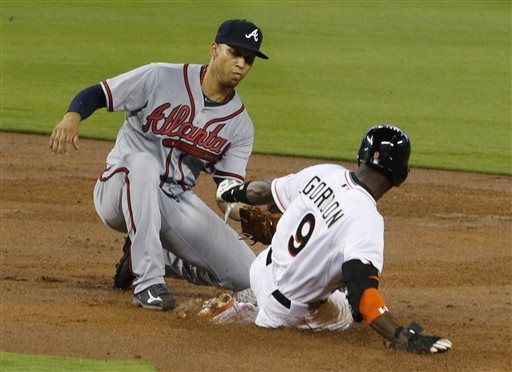 MIAMI (AP) — Even without Craig Kimbrel, the Atlanta Braves’ bullpen was terrific on opening day.

Two relievers combined to escape a bases-loaded, none-out jam in the seventh, and new closer Jason Grilli pitched a perfect ninth to help the Braves beat Miami 2-1 on Monday.

“You’re sitting there after Craig gets traded, and you’re thinking the first save chance is going to be a one-run game,” manager Fredi Gonzalez said. “And sure enough, it didn’t take 12 hours for this thing to materialize.”

Trailing 2-1, the Marlins bunched three consecutive singles to load the bases starting the seventh. But Luis Avilan retired Jarrod Saltamacchia on a 5-2-3 double play, and Jim Johnson got Adeiny Hechavarria to foul out.

“That seventh inning was unbelievable to get out of that jam,” Gonzalez said.

Grilli struck out Giancarlo Stanton to start the ninth, struck out Michael Morse and retired Martin Prado on a soft liner to earn his 51st career save.

“I’ve always loved closing,” Grilli said. “When you’re a reliever, you strive to be that last guy in the end.”

Braves newcomer Nick Markakis drove in both of their runs. Julio Teheran (1-0) allowed eight hits but only one run in six-plus innings.

Teheran was helped by his defense. Shortstop Andrelton Simmons was alert to cover third on a single to left and tagged out Stanton trying to advance from first. Second baseman Jace Peterson made a bare-handed grab as the middleman on a double play in the fifth.

“The moment he reached base, the whole stadium knew he was going to steal,” Bethancourt said. “I just tried to remain calm and used my best tool, which is my arm.”

The Marlins have hopes of ending an 11-year playoff drought following an uncharacteristic offseason spending spree, but little went right for the home team. The sellout crowd’s mood briefly turned sour in the second inning when the game was halted for 16 minutes because of rain — a first at 3-year-old Marlins Park, which has a retractable roof.

The showers were unexpected, and fans booed when play was halted while the roof closed.

The opener was a flop for Miami in more ways than one. Speedy newcomer Gordon appeared to have a chance at a bunt single in the eighth inning, but he stumbled leaving the batter’s box, went face down in the wet dirt and became an easy out.

The wet track was also a factor when he was caught stealing.

The Marlins’ Henderson Alvarez (0-1) gave up two runs in seven innings and scored their only run.

Marlins slugger Giancarlo Stanton went 1 for 4 and made a baserunning mistake in the fourth, when he was thrown out trying to go from first to third on a two-out single.

The game was Stanton’s first since his beaning Sept. 11 — and since he signed a record $325 million, 13-year contract.

Introductions by Michael “Let’s Get Ready to Rumble” Buffer began with Marlins players on the ballpark concourse, and one by one they walked through the stands and made their way to the field as they traded high-fives with fans.

Marlins newcomer Mat Latos, who grew up in South Florida, will make his first start for his hometown team Tuesday.