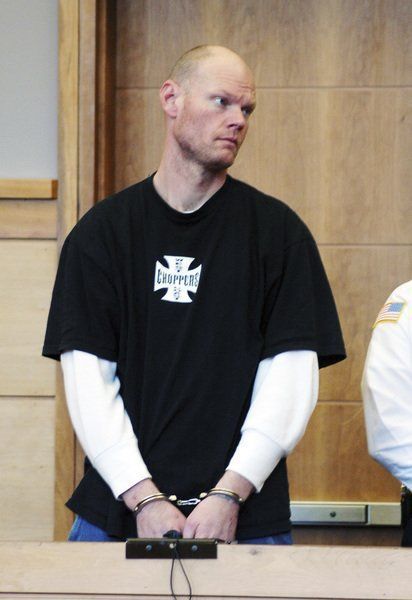 NEWBURYPORT, Mass. — A man accused of breaking into an elderly woman’s home in Amesbury and robbing her at knifepoint last week will remain jailed pending a hearing later this month.

John Farley of Nashua, New Hampshire, arrested Thursday in Revere, Massachusetts, was charged with home invasion, armed robbery, assault with a dangerous weapon on a person over 60, larceny from a person over 65 and witness intimidation.

Amesbury police responded to a call Saturday, March 28 on Claire Road, where they say the 38-year-old Farley robbed an elderly woman at knifepoint. The victim, in her 80s, suffered minor injuries and was treated at her home by local paramedics.

The Newburyport Daily News reports the 6-foot-6-inch Farley remained silent throughout an arraignment hearing Tuesday in Newburyport District Court. An Essex County prosecutor immediately asked that he remain jailed until a dangerousness hearing could be held.

In Massachusetts, a dangerousness hearing is to determine if a defendant poses too much of a threat to his victim or society at large to be afforded bail.

According to a report filed by Officer Jonathan Morrill, around 5:20 p.m., Farley came to the woman’s home looking for directions to High Street and then asked to use her phone. Reluctant to allow Farley into the house, the victim brought a landline phone to him. As she did so, Farley drew a knife and pointed it at her.

Farley then went into the kitchen and rummaged through her purse and took $75 cash, a cellphone, a credit card, a blank personal check (which he used to write himself a $400 check from her bank account) and a pink landline phone.

He then left the house, leaving behind a cigarette he had smoked by the front door.

According to Amesbury police, he is also wanted in connection with another home invasion in Hampstead, New Hampshire, where police believe he punched a female victim repeatedly in the face before stealing one of her personal checks.

Amesbury Detective David Pare said the incident in Hampstead took place a day before the Claire Road incident. On March 31, Farley was caught on video trying to cash that check at Citizens Bank located inside a Methuen Stop & Shop.

1. Remember that life-sized chocolate statue of Benedict Cumberbatch? Well if you thought you were the only one who snuck... read more