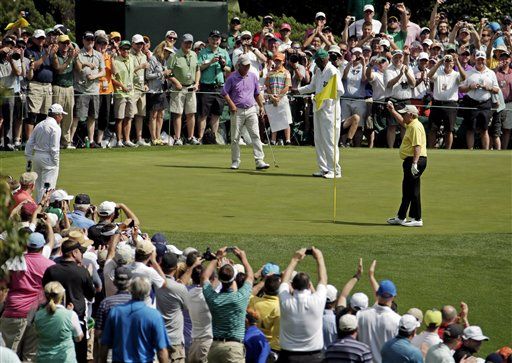 The six-time Masters champion, playing in the exhibition at age 75, spun an iron shot back into the hole for the ace.

His ball bounced twice, then took a third hop before retreating into the hole. Nicklaus was congratulated by playing partners Ben Crenshaw and Gary Player.

Nicklaus acknowledged the ovation from the crowd, raising his arms in the air with a double fist-pump.

He says he may have called his own shot.

The 63-year-old Crenshaw seemed as excited as Nicklaus about the shot. Crenshaw will tee off for his 44th and final Masters on Thursday.

Nicklaus said he likes playing the Par-3 because it’s not long.

“I actually hit two more shots that hit right around the edge of the hole, had a chance to go in,” he said. “I didn’t finish up very well, but we had a lot of fun.”