Big Three on the tee a Masters tradition steeped in history 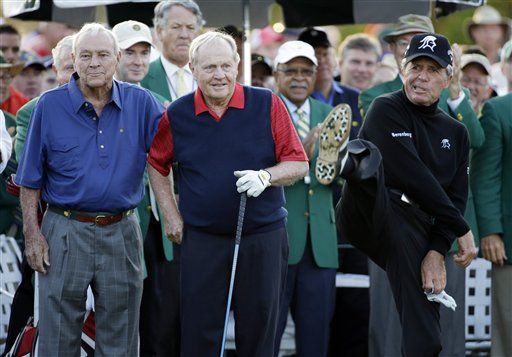 Big Three on the tee a Masters tradition steeped in history

AUGUSTA, Ga. (AP) — They shared the lead going into the weekend 50 years ago at Augusta National.

Arnold Palmer, Jack Nicklaus and Gary Player have been together ever since as rivals through the better part of two decades and friends for even longer. They reunited again Thursday morning in a familiar role when each hit a drive off the first tee to start the Masters.

Palmer slipped on carpet in his home last December and dislocated his right shoulder, keeping him from the Par 3 Tournament. But he wasn’t going to miss that honorary tee shot, which he has hit every year since 2007.

Stooping to tee it up, the 85-year-old Palmer said, “Oh! I got it on the tee. Wow!” And then before stepping up to the ball, he turned to his army of fans and said, “Now when it goes out of sight, don’t be surprised.”

Getting it in the air was all that really mattered.

They are known as the “Big Three,” a phrase coined when all were represented by the late Mark McCormack at IMG, and they combined to win the Masters 13 times. They were the only Masters champions for seven straight years in the early 1960s.

But when they convened in the press center for laughs and stories, it was clear the relationship extended beyond golf.

Player told a story of the time Palmer was with him in South Africa and was challenged to pick up a gold bar with one hand. Palmer has some of the biggest hands in golf, strengthened by turning the steel wheels on the tractor at Latrobe Country Club.

Palmer flew to Washington two weeks ago to watch Nicklaus receive the Congressional Gold Medal. Player often stayed with Nicklaus and his wife Barbara, including one time when they were tied for the lead in Florida going into the final round.

“Now Barbara is giving the breakfast, and I’m thinking, ‘Hell, I’m a bit worried about this. We’re tied.’ So when she put the eggs on the table and she went to the kitchen, I swapped them around,” Player said laughing. “But it didn’t help, because he beat me anyway.”

Player said he was on a radio show with Nick Faldo when the topic of rivals and relationship came up. He said Faldo mentioned a rivalry in his prime with Seve Ballesteros and another player — presumably Greg Norman — that had the trappings of a “Big Three” for that era. But they were never that close off the golf course.

“Nick Faldo really got me thinking,” Player said. “Never in the history of golf have there been three people that have basically lived with each other all these years and have such respect and love for each other.”

And with love comes plenty of banter.

It was in 1965 when the Big Three were tied at 6-under 138 after two rounds of the Masters. They were asked their recollections.

“I remember what the third round was,” Nicklaus said with a grin.

He matched the Masters record with a 64 that day to pull away, and he wound up beating Palmer and Player by nine shots.

“I remember it,” Player quipped. “The wrong man won.”

Palmer struggles with his hearing, but not his delivery. He leaned into the microphone and said, “I don’t remember anything.”

They talked about equipment, and how Palmer used to change his own grips, bend the shaft with his hand and re-whip the hosel of his driver with a nylon string. That doesn’t happen anymore. Drivers are made of titanium, not wood. Players carry screwdrivers to make adjustments.

“It was all guesswork by all of us in those days,” Nicklaus said. “And if you found one, then you try and stay with it. I had a driver that I really liked and I broke it playing with Gary in South Africa in 1966, and that was the one I played the first five or six years on tour. And then I used a driver from then until 1978. That was a 42¾-inch driver with 11½ degrees of loft made in 1945.”

He won nine of his 18 majors with that driver.

They spoke four about 20 minutes, and Palmer wrapped up the press conference as only the King can.

But not before Player got in one more word.