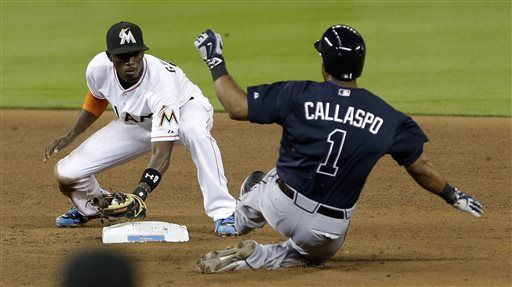 MIAMI (AP) — Basking in the roar of the crowd, Giancarlo Stanton grinned and waved. The $325 million right fielder’s first memorable moment of the season was a catch.

For Stanton and the rest of the Miami Marlins, the offense is yet to come.

Stanton turned a dazzling double play, one of several defensive gems Wednesday by the Marlins, but they again sputtered at the plate and lost 2-0 to the Atlanta Braves, who completed a three-game sweep.

The Braves are supposedly rebuilding, while the Marlins have playoff hopes, but Atlanta outscored Miami 16-3 in the series. The season-opening sweep was the first for the Braves since 2007.

“It’s disappointing, no doubt,” Marlins manager Mike Redmond said. “I thought we had a really good spring, and to come in and get swept is definitely a big blow.”

The Marlins are batting .200, and none of the eight regulars has an extra-base hit. Stanton struck out three times and is batting .125. Adeiny Hechavarria is 0 for 10.

“We’ve hit a little bit of a rough skid right out of the gate,” left fielder Christian Yelich said. “We’ll be all right. It’s only one series.”

For the crowd of 16,127, the night’s highlight was provided by Stanton, who looked a wide receiver — which he was in high school — when he saved at least one run in the fourth inning by chasing down Freddie Freeman’s deep fly.

Stanton made a running, over-the-shoulder catch that left him sprawled on the grass, quickly rose and threw a strike to first to double up Nick Markakis.

“That was an amazing play,” starting pitcher Tom Koehler said. “Did you hear that crowd? I’ve never heard the place like that. That was amazing. I had to step off so he could get his due.”

The other Miami outfielders followed Stanton’s example. Gold Glove winner Yelich threw out Alberto Callaspo trying to stretch a single into a double in the fifth. Center fielder Marcell Ozuna made a sliding catch to rob Jonny Gomes of a hit in the ninth.

“That’s one thing we did do tonight — we played good defense,” Yelich said. “We didn’t take the scuffles on offense to the defensive side.”

A.J. Pierzynski hit a two-run homer and five pitchers combined on a six-hitter for Atlanta. The 38-year-old Pierzynski, playing in his first game with his newest team, broke up a scoreless tie in the seventh inning against Koehler (0-1).

“The one glaring mistake cost us the game,” Koehler said. “That one stings a little bit.”

Shelby Miller made his first start with the Braves and allowed four hits in five innings. Brandon Cunniff (1-0) followed with 1 2-3 perfect innings for his first major league victory.

Jason Grilli, who assumed the closer’s job when Craig Kimbrel was traded on the eve of the season, pitched a 1-2-3 ninth for his second save in as many chances.

Marlins catcher Jarrod Saltalamacchia, who has struck out five times and is hitless in seven at-bats, was replaced by Jeff Mathis in the lineup.

Marlins: RHP Dan Haren, who considered retirement during the offseason, will make his first start for Miami on Friday against Tampa Bay. Haren went 13-11 with a 4.02 ERA for the Dodgers in 2014.

Miami won all four games against the Rays last year.

“Last year, at the beginning of the season, I had a rough patch,” Stults said. “Then the last two or two and a half months, I really felt I started throwing the ball well.”

Hawks’ Millsap to miss at least 2 games with…